Kevin Kraczkowski of SBN's Hot Hot Hoops was gracious enough to answer a few questions about the Miami Heat for today's game.

After the Heat beat the Mavericks in 2006, lots of Mavs fans (myself included, sorry) still hold a pretty strong grudge against Dwyane Wade. Any idea how his knee is doing, and how long he'll be able to keep it together? How big a part is he of this team, still?

How big? He's still worthy of the big three label. Even though his play has declined somewhat, he's still a top 15 guy in the NBA. Without his presence, you're still looking at a contender, although probably not the perennial favorite that the NBA is accustomed to. I stated in an earlier Q&A that Chris Bosh may have passed him in the hierarchy, but the knee looks fine. He'll sit out the second game of back-to-backs against other-than-elite opponents to ensure that he'll be able to contribute later on. Keeping him healthy is important to the Heat's three-peat aspirations. He should be able to hold it together for two more seasons, give or take. In the meantime, he can still play above the rim when he needs to.

This is the second year in a row that the Heat have had major trouble with their defense coming out of the gate (giving up 104.3 points per 100 possessions, 8th worst in the league). Is this a real concern for this team, or is this just another part of the "Championship Hangover," and like before, it'll just get fixed up as the season goes along? 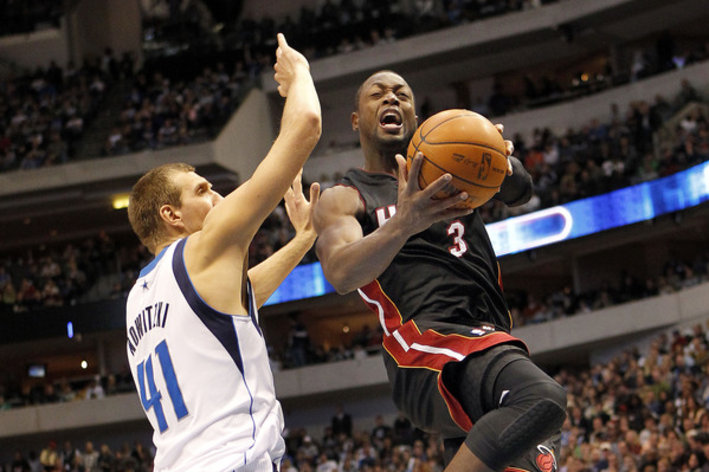 In which I answered questions, in return, for Hot Hot Hoops. See the other side of the coin!

Miami can block and steal when they need to, although the concept of rebounding seems to have deserted them at times. Still, that pace of play mostly works in Miami's favor. As long as the offense continues to rank amongst the best in the league, there are very few teams that can trade baskets with the Heat for 48 minutes. I think they may improve a little as the season shakes out, but still rank in the bottom half when all is said and done. So, I guess my answer is that for Miami, the best defense is a good offense.

It looks like this matchup is going to be a mostly offensive shootout, as two top 5 offenses go up against two bottom 10 defenses (though obviously the Heat are capable of being as stingy as stingy gets, defensively). What Heat player(s) do you imagine going bonkers against the Mavs, and what Maverick(s) are you most concerned about stopping?

Seriously though - Miami's keys to a win tonight shouldn't seem out of left field. Wade seems to get up for the Mavs, and LBJ gets up for everyone. Mario Chalmers (15-for-26 from deep), James (14-for-28), Bosh (eight-for-16), Michael Beasley (four-for-six), Rashard Lewis (six-for-13), Norris Cole (six-for-14), and Ray Allen (11-for-30) are all shooting above league average, and Shane Battier, Wade, James Jones and Roger Mason Jr. can also tee up. The Mavs seem to have comparable talent from outside. As I stated in our companion piece, Dallas has nine guys putting up 1.8 or more three-point attempts per 36 minutes. I think that neither team can target a specific opponent to key up on. When the ink dries on tonight's box score, I think we'll have seen 230 or more points scored (bet the over).

This team hasn't changed much since last season, only jettisoning Mike Miller and obtaining Greg Oden and Michael Beasley, neither of whom are likely to play much, if at all, against the Mavericks. What are some of the positives and negatives of rolling into the year with such a familiar team?

Oden won't play, but B Easy should play 15 to 20 minutes. Wade had a quote earlier this season about how being on the Heat is like being in a marriage - about how sometimes you get bored or complacent and about the need to continue to make an effort.

The negatives could be the Heat internally believing the hype. Some pundits have already crowned Miami as a three-time defending NBA champion. But isn't that why they play the games?

Positives include the familiarity. The point guard combo of Cole and Chalmers seem to have improved a lot of the facets of their game, and now Bosh is shooting three's?!?

It seems like there's not much to ask about this Heat team, because they're such a known commodity. So, this is going to be a strangely personal question, but what's it like to be a big fan of such a historically great team? What's it like to watch the best player on the planet do his thing every other night?

You've got to understand that not every fan is represented by that sad group banging on the doors of the AAA last June. I've been a fan since the franchise was awarded back in 1986, and lived through those horrible first few seasons filled with hope. I can truly say that I would watch if the team won 20 games a season.

Watching this team 82+ times a season is a joy. I never know what's going to happen, but it's probably going to be spectacular. The NBA League Pass was money very well spent.