It has been seven games since we last caught up with Mr. Ellis. Here's the next installment of Monta vs. the Shot Chart, in which you're going to see some pretty crazy swings.

Welcome to Monta Ellis vs. the Shot Chart. This is not designed to call Monta out nor justify his actions. This is only to prove or disprove a narrative that Monta has carried with him for much of his career. Can he change?

Here's the first Monta vs. TSC, in case you missed it or want to see his overall progress. Let's get right down into it. 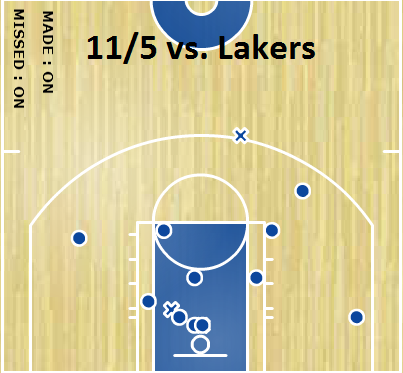 Bang. Bang bang bang. Monta was a killer in this game. More importantly, almost all of his jumpers came driving the ball. This wasn't the stepback Monta show, nor the little sideways hop, nor even the pull-up Monta. He was putting the ball on the floor, moving towards the basket, with ever jumper coming in rhythm. 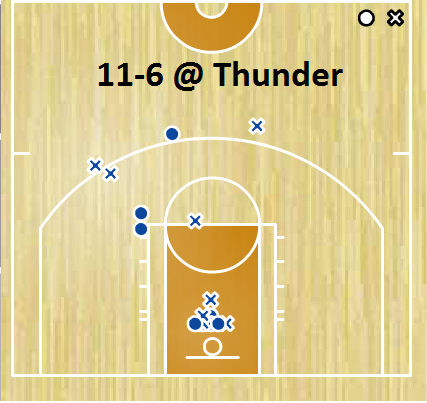 There's a trend I'm noticing -- Montaball emerges more and more when the Mavericks are down in games. It's probably something I'll tackle statistically in next week's edition, but it's worth mentioning now in a game where Monta missed nine shots. But despite some missed, you've got to love that cluster right at the rim. Monta has proven he's a good finisher at the rim and there's no reason to think that he won't finish the season hitting 60%+ of his layups/dunks. 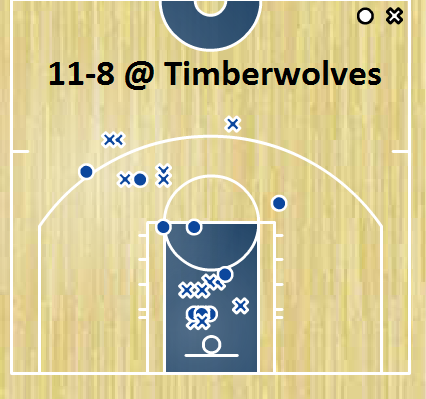 Points in the paint is an interesting statistic, because taking a shot in the paint that ISN'T at the rim is usually not a high percentage opportunity. I don't have the exact league average stat, but shots taken in the paint, but outside of the restricted area, go in about 35% of the time this year.

That's not to say it's bad for players to get into the paint. As you see, Monta had success driving into the lane, where he can often find an easy dump-off to a big man for a layup, or has a higher chance of being fouled. But every so often, we'll see a game where those drives fizzle out as wild flips over a defender or blocked layups, as most of those misses accounted when I reviewed the tape thanks to MySynergySports.

This is the lone submission to #moreshotsthanpoints this year and that's fantastic. 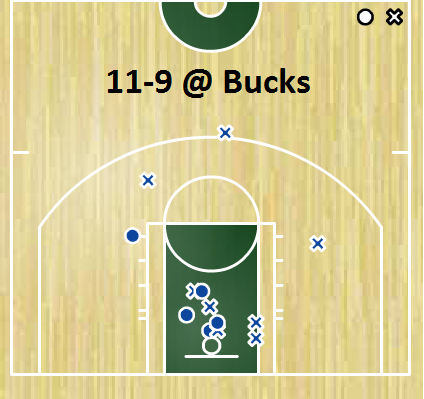 This was an ugly game all the way around with the fourth game in five nights. Let's not spend too much time on it. 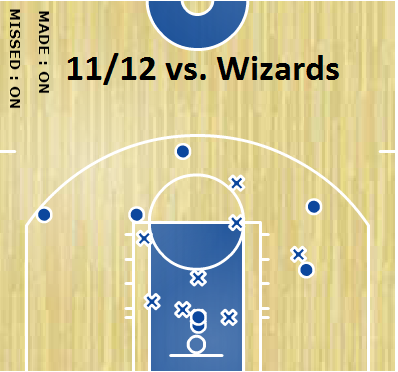 It's weird seeing just one made shot in three attempts at the elbow. Look back through the shot charts and you'll notice that when Monta gets a shot around that area, he's almost automatic. 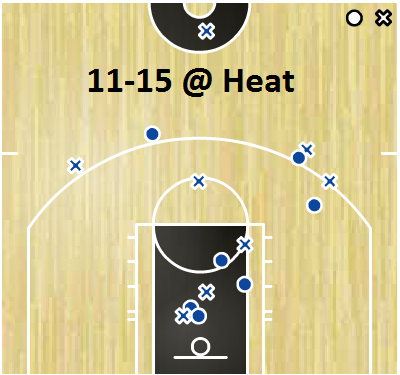 We see one of the three pointers was actually a half-court heave, and we see that Monta also played nearly the entire game. I wasn't able to watch this game so I can't speak for Monta down the stretch, but this is a pretty great shot chart going up against the best team on the planet. 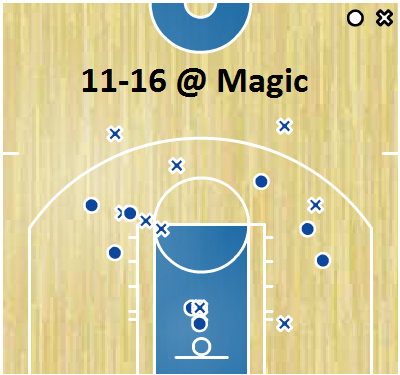 And the last game we'll cover is here. Monta was in one of his mid-range jump shot sprees, but how can you complain when he makes 6/10? Seriously, that's the thing. Taking mid-range jumpers has never been the problem for Ellis, something it's easy to forget. Look through his shot charts and you notice he hasn't taken an abundance of those shots unless he's also making them.

Monta is still a top ten scoring leader in the NBA with 21.9 points per game, shooting 47% from the field and 30% from behind the arc. He's averaging 5 assists a game, which is eighth (of 24) among players who are scoring 20+ points per game this year. Could you argue he's taking too many threes? Sure, but 84% of his shots are coming inside the arc.

His biggest issue is 4.1 turnovers per game. Problematic, but explainable as someone still learning Carlisle's system. Nothing to be too concerned about yet.

We can leave it on this.