The top of the pack is evening out, the middle is still crazy, and the Mavs are tucked in between.

Share All sharing options for: Ranking the Rankings, Week Three: Settling in?

Our weekly look at the power rankings has arrived! My apologies for it being a little late today -- real life, etc. etc.

If you're just tuning into this series, we're looking at the power rankings from the various bigger sites from week to week to get a feel for where the Mavs stand in the big picture of semi-arbitrary lists. Let's see what madness is in store this week! 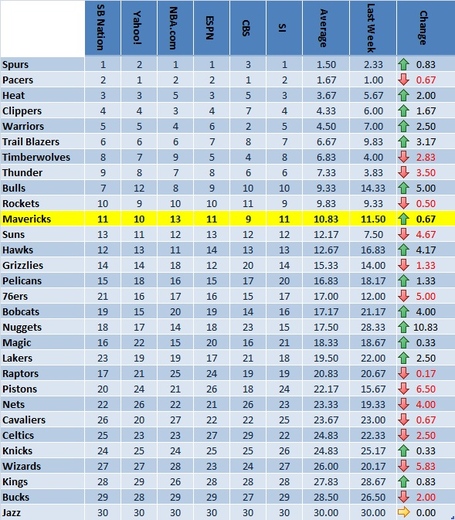 The Mavs have been a juggernaut at home on the young season, scoring 114.3 points per game in four victories. Monta Ellis has had it all at American Airlines Center, averaging 24.8 points and 6.5 assists while shooting 55.7 percent from the field.

After seeing his role shrink over his last two years in San Antonio, DeJuan Blair is having a bit of a renaissance as the third big in Dallas. The Mavs still lack depth up front, but Blair and Samuel Dalembert have formed an adequate offense/defense combo next to Dirk Nowitzki. Dallas has been pretty potent with Blair (who had 18 points in Orlando on Saturday) and Nowitzki on the floor together.