Join the Mavs Moneyball staff as we try to decipher that crazy 123-120 comeback victory over Houston last night.

Share All sharing options for: MMB Roundtable: Dirk and Monta bury Houston in the fourth quarter

Kirk (@KirkSeriousFace): I'm having a hard time this morning. I wasn't able to sleep after that game; other than the Chicago game last season, has there been a more exciting game from Dallas in the last few years? What in the hell happened? How did Dallas come back from down 17 to win?

Doyle (@TheKobeBeef): Shane did play some really solid minutes last night. In the post-game presser, Carlisle talked about how slow the team was and that they needed a guy like Larkin who possesses dynamic speed. When Larkin threw himself on the floor for a loose ball, I think he was going for a steal, I was completely sold on his effort. Sure, his defense wasn't the best but that is something that can be taught. Hopefully, the Mavs have something in Larkin.

Tim (@tim_cato): It's nice to finally have a rookie who can bring some excitement to the court.

That Dirk-Monta tag team was ridiculous last night. Absolutely, completely insane. There's a reason the last time two Mavericks scored 35 or more was in 1995 -- that is very, very hard to do. Just ONE player scoring 35+ is hard to do. But I think we've all learned our lesson with O.J. Mayo's host straight last season. There's no doubt that Ellis' shooting percentages have to drop a little -- he's shooting an unsustainable 54% from 16-24 feet -- but what happens when they do? Will he continue to balance his passing and scoring ball, or will the Montaball we've seen brief flashes of take over? 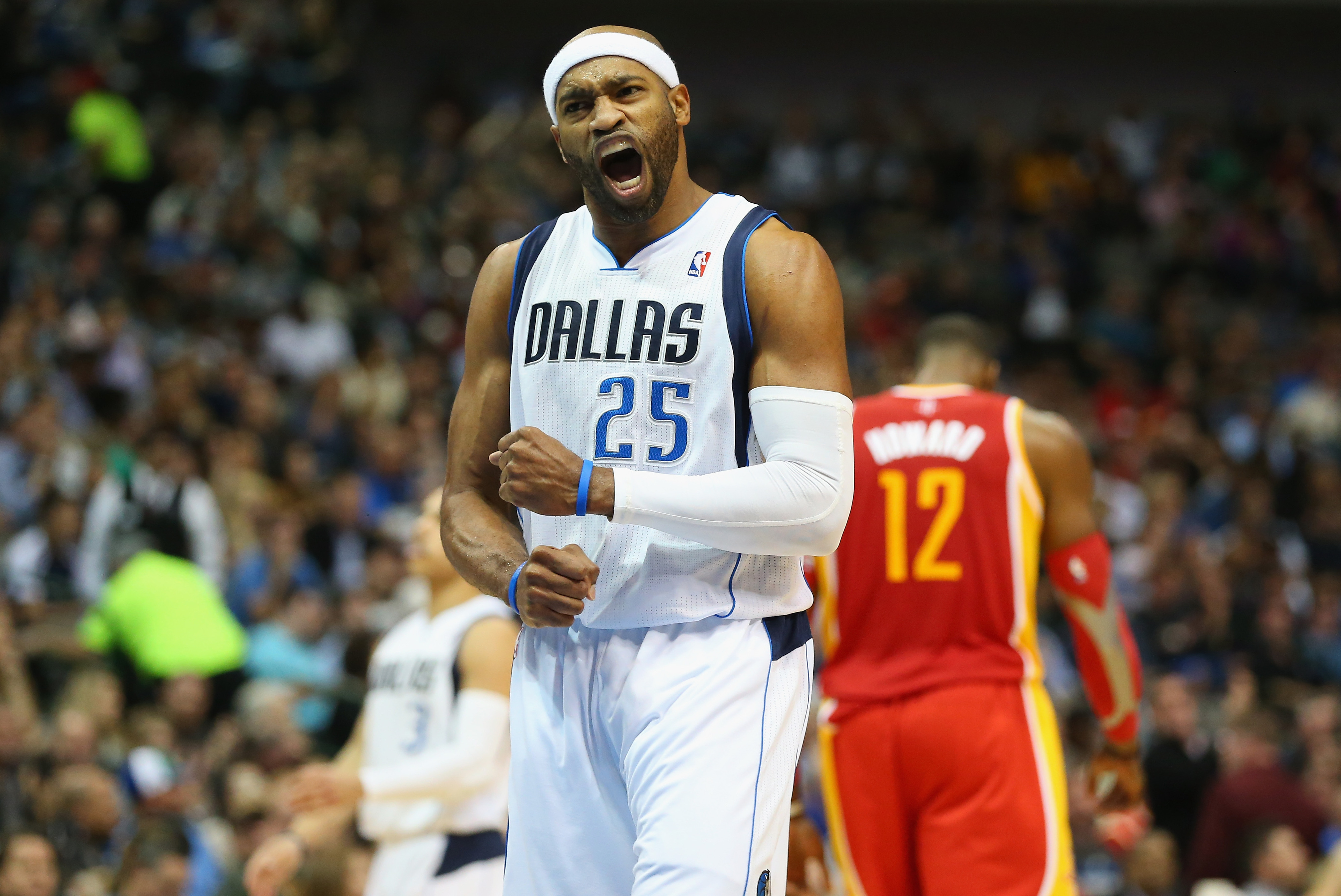 After the game, Vince Carter had some friendly digs to take at the former Lakers center who spurned Dallas this offseason.

Alan (@IanSmithee): Didn't it feel like one of those crazy comebacks from the title season?

I guess maybe the big development for me is that I already believe more in Monta Ellis being present and engaged in the 4th quarter than I ever did O.J. Mayo. I think we could still see some valleys to go with the early-season peaks for Monta, but you don't get the feeling he will shy from the spotlight when the game hits crunch time.

Just to remind us all that it's only November and early-season stats can be crazy...Shawn Marion is shooting 48% from three.

Shane Larkin making plays is new and exciting. I mean no disrespect to Gal Mekel, but Larkin clearly is the better fit for what this team likes to do on offense.

I know Dalembert is blocking shots and doing the best he can on offense, but a healthy Brandon Wright could make Dallas scary good, at least at one end of the floor.

Andy: To me, it's just so clear that Monta can do things no Mav has been able to do in the Dirk era. You can't tell me the Mavs can't profit from that, regardless of the objective truth of Monta as a player.

Jonathan (@JonathanTjarks): Monta is playing at an All-Star level, in my opinion. Not that he has much chance to get one, given how stacked guard is out West.

There are a lot of nights when the Mavs have the best two players on the floor.

Tim: How do we feel about his defense? It's not good, but I feel like there might be more effort than in the past He has articles that rip his defense printed out and hanging up in his locker.

Lisa (@ljrotter): I just woke up. Apparently that game had me so wired that I had to take benadryl just to fall asleep.

I agree the game had that playoff feel Ian mentioned. And it was one of the first games in a while where it was a meaningful win, in that it was against a relevant conference opponent who has been touted (albeit wrongfully) as a title contender.

We all agreed before the season that this team had the potential to be fun to watch and boy were we right. With the speed of that offense, this roster has the ability to close a point gap FAST. That means a lot of those games where the result isn't decided until the buzzer always have the chance to fall the Mavs' way. And THAT makes for exciting basketball.

Jonathan: Don't have any numbers for this, but I feel like the Mavs could score at early 00's level when Wright gets back.

As for Monta's defense, that's going to have to be addressed in the off-season. They need to bring in a bigger guard who can take the tougher assignment in the back-court. You can't have him or Calderon defending Harden or Chandler Parsons in a seven-game series; you just can't.

Ian: That's the real issue, potentially. I don't know if Monta's ideal backcourt mate exists. A big guard who can handle the ball, splace the floor at least a little, and cross match on defense.

You could try trading Devin for Kidd again...

Jonathan: Not that the Mavs care, but there are a ton of big PG's in college this year.

Spencer Dinwiddie from Colorado (6'6 200) is exactly that player.

Kirk: It is top 20 protected. If Dallas has a top 10 record in the league, I think the fanbase is pleased.

I wont be because I want dallas to be good later, but no one cares what I think

Jonathan: At the very least, you figure that the Heat, Pacers and Bulls will finish way ahead of the Mavs. That means they have to be the 7 seed to trade it.

In that respect, either outcome is probably fine -- they're going to have to give up a pick at some point, might as well bite the bullet.

Ian: Assuming the Jazz are bad enough to get Parker or Wiggins(very possible), I wonder if Alec Burks becomes available?

Jonathan: Probably depends on what happens with Ty Corbin. He's never had much time for Burks.

Kirk: I'm of a similar mind... that they might as well do it while Dirk is still alive, otherwise it's going to come due RIGHT as Dirk retires which would be so, so Maverick.

Things that are also SO Maverick - not having a pick in the best draft in years. But that CEltic 2nd rounder is looking nice this year.

Josh (@Boweman55): I really, really hope that game brought back some Mavs fans that had become somewhat distant with the team that last two years. I have a lot of friends that just straight up ignored the Mavs last season once they realized what kind of team it was.

That's what has me most excited. The Mavs have a chance to at least reinvigorate a fan base that had kind of stalled out lately. Give them something to go nuts about.

That game was awesome. I had to stop tweeting because I had to run real close to my living room TV to yell "COME ON!" and dance around the room and act like a five-year-old. I haven't acted that way during a Mavs game in years. It felt really good.