Part 1 of my new weekly series highlighting a few key stats for the Mavs season so far, including some stats that I've personally calculated. This week we focus on whether or not Jae Crowder and Monta Ellis have really "improved," Crowder's streakiness, and other stats.

Share All sharing options for: Statsketball, Pt. 1: Streaky Jae and a Changed Monta

Welcome to the first edition of my new weekly series, Statsketball, in which I take some telling stats about Mavericks basketball that I've found or calculated over the course of the week, and I talk about them a little bit. I hope you enjoy the series!

This week, I'm focusing on the question of improvement with both Jae Crowder and Monta Ellis. There's been a lot of debate about whether Monta Ellis is a new and improved player, or if he's the same player of yesteryear who simply fits better in a new context (though the distinction is not necessarily that important). I'm similarly interested in whether or not Crowder has improved at all this season.

So, I did some number crunching to get a glimpse into the performance of both players. For the record, the whole point of this series is that none of these stats are intended to be comprehensive, but instead, are simply a glance into the players' year so far, perhaps from a new and -- hopefully -- illuminating perspective.

If you have any questions about my math or anything else, feel free to contact me on twitter (@HalBrownNBA) or shoot me an email.

For the year so far, Jae Crowder is shooting just over 50% from the floor (prior to the Nuggets game, so it's entirely possible that his percentage has dropped just below 50%). This is greater than Crowder's (short) career average by almost 10%, which is a difference so large that there's a less than 1/3 chance that Crowder even shoots above 50% in one game.

So, to that point, it's probably a good sign that Crowder has shot over 50% for almost 2 weeks now. That's two weeks of beating the odds from game to game to game. Of course, for the last six games he's shot at an atrocious sub 30% clip that has prompted everyone to wonder whether or not he might be regressing back to his rookie year averages, and regressing hard.

But the thing is, no matter how hard he regressed last week, Crowder still hasn't dropped back down to his career average. If he were to level out now, he might still be a productive NBA player with those percentages: Mid-40ish% from the field, 34ish% from 3.

So, this stat is really interesting in part because it indicates that next week could be a make or break week for Crowder. Using his career averages, my number crunching is telling me that there is basically no chance that Jae shoots above 50% next week. Really, shooting anything above 48% from the floor next week would have odds so low as to be basically impossible.

This is another interesting stat: Crowder is likely to continue regressing to the mean, says the first calculation, but he's not likely to shoot below his career average for the week, since his shooting for the last week has been so horrific. Basically, he shot so well, and then fell so far, that he's guaranteed to have a mediocre week to balance it all out.

Crowder has been so streaky that even math is telling him to chill the hell out and get a grip, man.

So, again, this isn't actually a guaranteed thing. The cool part about doing this math for Crowder and Monta is that we're not sure that their career averages apply to them anymore. They're primed to prove this math wrong. And man, I hope they do.

If he performs somewhere in the middle, per the model, then fine. He's who he is. But next week he has a chance to prove himself, one way or another.

This sets the stakes for next week a little further. If Crowder wants to prove that he's improved, next week is the time to do it; he has the chance to, almost literally, do the impossible. However, if he continues to shoot the ball like it's an actual hot potato, then he'll have done the impossible on the other end: he'd be so bad that even the worst case scenario based on his stats from last year wouldn't be bad enough to describe it.

This stat is most telling because of how much it says about how not great Crowder is from distance for his career. His shooting has been so horrifically bad that he's bound to rebound into form soon...but he's so streaky and so inconsistent that he's unlikely to maintain even his career average for an entire week (mathematically, his variance on 3 point shooting was very high, in case you were wondering how streakiness can factor into the math).

Basically, in one game soon, we can expect Crowder to get pretty hot. But, don't expect it for more than one game. This, more than anything I've said so far, is worrisome to me. Once again, I desperately hope that he proves me wrong. He gets that chance, though, starting now.

Monta may actually have it all, now

What Monta brings to the Dallas Mavericks 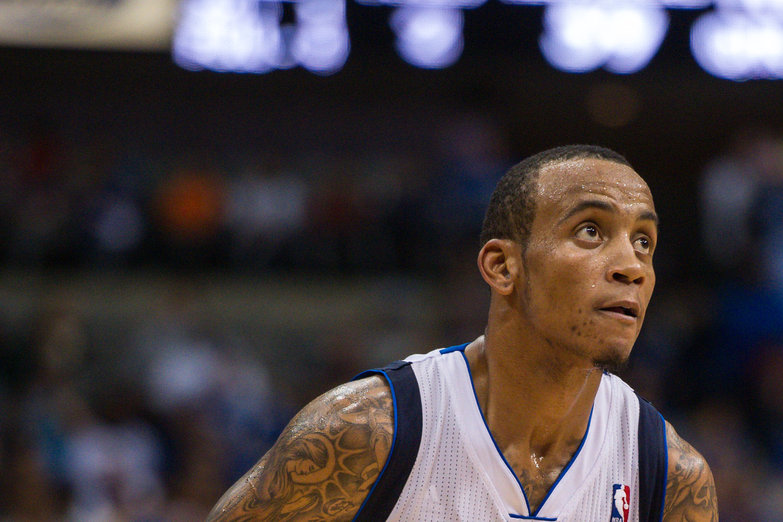 Andy's great breakdown of the difference between bad and overrated and how it applies to Monta Ellis.

I've said it before, and I'll say it again: I was wrong about Monta. He's been stellar so far. There's still a palpable fear among a lot of people that he'll suddenly turn back to his bad habits from Milwaukee, but honestly, I'm not that concerned about it. He looks comfortable with how he's been playing to start the season. He looks in his element. He doesn't look like he's forcing it. I think we're just watching Monta do his thing with a team that makes sense for him.

Why am I not that concerned about him regressing? Well...

That has to bode pretty well, right? I mean, to an extent, Monta has already beaten the odds by playing this well. That has to be a good sign. You don't beat the odds like that without either regressing fast and hard or keeping up the trend for the long haul.

It certainly doesn't guarantee anything, and he could quite possibly suddenly start jacking up maddening 20+ foot jumpers, but I can't help but think that if in two weeks he still has a TS% of 57% or higher, it might be time to celebrate the coming of Monta Ellis: assassin.

I mean, he's keeping up the good stuff. His percentages stay high, his assist percentage hasn't been dropping, and he's already performing well outside of expectations. In fact, he's doing so well that it might be time to start questioning whether or not the improvement is actually entirely a function of context, or whether or not we may be seeing a new and improved version of "Monta Basketball," if only for the sake of the accuracy of the narrative.

Speaking of adjusting the narrative:

That's it right there: that's Monta's goal. Or, it should be. There are a lot of reports that Monta is working to prove the doubters wrong this season, including one report that Ellis is keeping a collection of negative writing about him pinned up in his locker for motivation.

Well, If he wants to prove the doubters wrong, this would be the best way to do it. The math says that he's got a 4 in 100 chance of being truly efficient this season. Well, so far so good, and hopefully, he's gunning for that 57% or above mark. Personally, I absolutely think he can do it.

This brings up an interesting point, though. If he does actually manage to keep up this shooting mark for the duration of the season, we all will have to concede that this really is a "whole new Monta," not the same old guy playing for a better team. Which I'm loathe to do. I've rallied against that idea rather vehemently elsewhere.

But, these numbers don't come out of nowhere. The incredibly low odds of him maintaining his True Shooting % are less an indication that he can't do it, but rather, a reminder that if he does do it, he's changed something about his play so fundamentally that he's now performing at a level that, mathematically, makes it appear as if he's a totally new player from who he's consistently been before.

On the other hand, perhaps this number might also be seen as a warning. We must be wary of some things (such as abnormally high shooting percentages), as they are not necessarily all as they appear.

I choose to be optimistic, in this case. I'm choosing to think that this calculation is mostly an indication of how badass it could be if he proves the odds wrong, rather than thinking that his numbers might actually trend downward.

More than anything, I want Monta to have it all.

Some Other Fun Numbers