Ranking the Rankings, Week 4: Movin' on up

It's nice to be liked.

Share All sharing options for: Ranking the Rankings, Week 4: Movin' on up

Week four power rankings are in, and this week has some fun moves up and down to discuss - including our dear little plucky Dallas Mavericks. 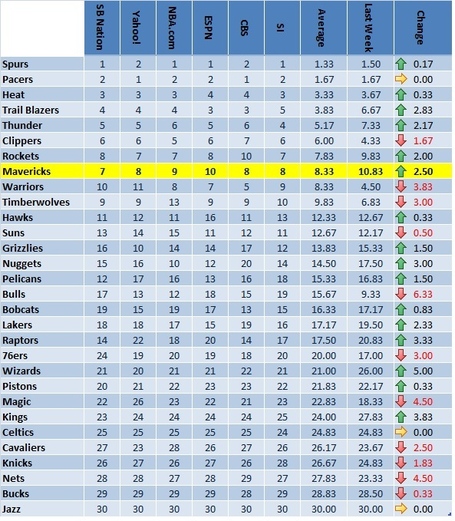 MONTA ELLIS HAVE IT ALL. Ellis has been incredibly awesome this season, with averages of 23.6 points and 5.4 assists. And most important, he has been efficient! This dude must have been really checked out in Milwaukee.

You could almost look at Monta Ellis' assist numbers to know if the Mavs won or lost. They're 8-0 when he's recorded five or more dimes and 1-5 when he's had four or less. His two assists to Shawn Marion that put the Mavs ahead in the final two minutes of Wednesday's win over the Rockets were particularly sharp. Fifty-seven of Ellis' 76 assists have come in the restricted area or from 3-point range.

Gotta go all the way back to 1999-2000 for the last time Dirk Nowitzki didn't lead the Mavs in scoring. Yet I assure you he's happier than anyone that Monta Ellis has been everything Dallas could have hoped for -- so far. For a long, long time, Dirk has wanted a sidekick who can get his own shot.