Vince Carter and Dirk Nowitzki give back to the community

It's not always about basketball.

Share All sharing options for: Vince Carter and Dirk Nowitzki give back to the community

We focus so much on basketball, stats and games around here, it's nice to see a change. Although this isn't a full list of Maverick players giving back to the community in some way, here's a couple who have made the news recently.

Vince Carter has teamed up with Sun Life to support nonprofit organizations with a total of $110,000 in grants and scholarships. He was on hand at a private basketball clinic to present two $5,000 scholarships.

Here's the rest of the press release:

The private basketball clinic took place at Paul Quinn College Tuesday night, where Carter was on hand to lead more than 35 Dallas youth from both nonprofits in a variety of basketball drills and games. After the surprise announcement, Carter also conducted a Q&A session with the youth, giving them insight to his background growing up, and what it takes to succeed in life and in school. 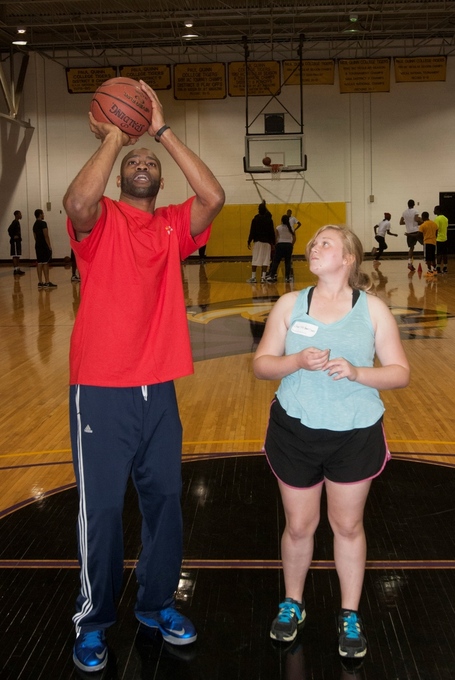 This year, Sun Life will provide nearly $1 million in grants, scholarships and other resources to outstanding organizations and students in Atlanta, Boston, Chicago, Dallas, Los Angeles, Nashville and South Florida. By the end of 2013, Sun Life will have invested nearly $4 million to recognize a total of 70 students and 63 nonprofit organizations in 14 U.S. cities, since the program began in 2010.

Also making news is Dirk Nowitzki, who is donating $20 to the iBellieve Foundation for every two pointer the Mavericks make this month. The foundation supports research on "MPS II, also known as Hunter syndrome, a rare and progressively debilitating genetic disorder that almost exclusively affects males."

The iBellieve Foundation was started by Simon Ibell, a Toronto native born with MPS II who was named the 2003 Canadian Spirit of Sport Story of the Year after biking 500 kilometers in 10 days to raise for MPS diseases alongside a number of athletes, including Nowitzki's then-teammate and close friend, Steve Nash. Through the Canadian point guard, Nowitzki and others, including Mavericks owner Mark Cuban, got to know Ibell's story and mission, and became involved in his cause.