Share All sharing options for: Dirk Nowitzki this season: a statistical breakdown

It's hard to accept, but once noticed hard not to admit, that Dirk Nowitzki isn't quite the player he was three years ago. It's not news to anyone, it just sucks.

Those of us who argued that the last two seasons had a lot to do with injuries, with a compressed season, with no training camp have more or less been vindicated. His TS% has rebounded from 56.4 the last two years to 59.8, just steps behind his 61.2 in 2011. He's not fallen off a cliff and he's not falling off a cliff. You want that, take a look at Kevin Garnett, currently scoring 6.7 points on 36% shooting. The 37 year old Garnett is at 1337 games for his career, and it shows,

But there is no getting around it. There are some shots this season that Dirk would never have missed three years ago that are good, but not great propositions now. He had to, for example, take that shot against the Hawks, singled against Jeff Teague 10 feet from the basket. But would 2011 Dirk have missed a 10-foot shot against a guy he could barely see, important or not? Maybe memory paints a rosier picture than reality was. but...let's just say "no".

The major thing that seems to be going on is that Dirk's game has simply changed, adapting itself to what his body can and can't do. And we can show that in the best possible way. With charts! 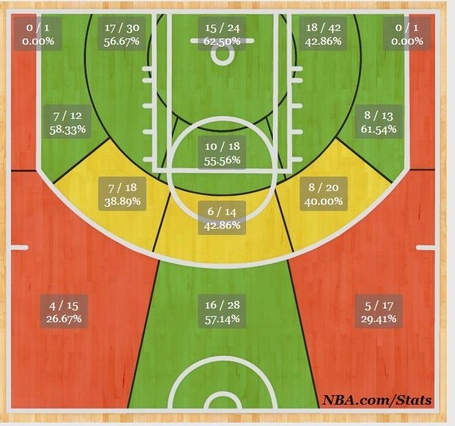 As you can see, he's shooting well from a lot of places, as usual. He's not been real good at the oblique threes his entire career, and he hasn't taken any corner threes which, at certain points in the last few years, was a staple of the Mavericks offense. However, he is shooting less well from his bread and butter shot, the long two, of which, of course, his shot over Teague last night was one compared to 2011. That shot chart looks like this: 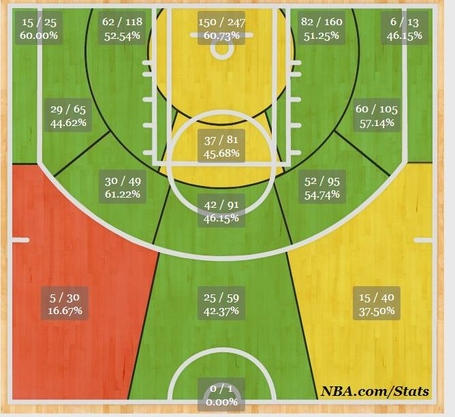 The biggest dropoffs--and it certainly feels like it from the old eye-test--are in that region. From averaging 53% across that three segment region in 2011, he's dropped to 40%. We can see as well the drop off in corner three attempts. Wasn't a huge part of his arsenal in 2011, but he shot very well from there, and it's 0/2 this year. Now, of course this is a small sample size, but that's also part of the point. It's not just the fact that the season is only 1/5th done that's making the sample size small, it's also Dirk's game. Here are the places Dirk's shooting from so far in 2013: 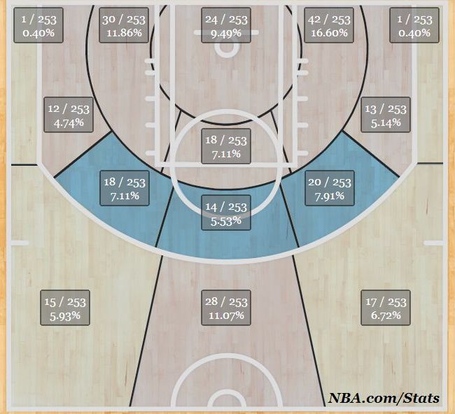 And here's where his points are coming from:

The first thing to note is that Dirk is taking a lot of threes. Over 20% of his shots are threes, and 21.6% of his points are from there. This is consistent with his aging game, threes are certainly an easier shot to get for an older player and he's shooting them very efficiently so there's no reason why not. Although it feels like he's missing his signature baseline fade more often than not, in fact we can see from the combination of charts above that he's still taking nearly 30% of his shots from those regions and still shooting unusually well from them. However, if we take a look at 2011, like so: 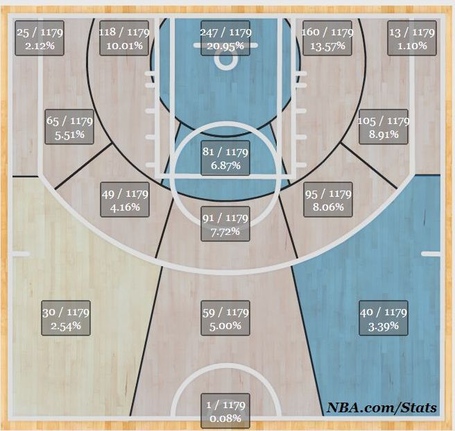 Now, you may not know this, but three-pointers count for more points than two-pointers which means that stats like points per game and ts% are to a certain degree costuming a decline Dirk's ability to do the major thing that I associate with Dirkianism, impose his will upon the game by finding high-efficiency shots no matter the defense. That is, it takes fewer made shots to get to 20 ppg if you shot 20% of your shots from three than if you shoot 14.2%, especially if you shoot it well. Therefore, we arrive at the conclusion from a variety of different angles that Dirk's ability to score in non-three ways has apparently declined this season, and that that's the biggest difference in his game.

Without the ability to improvise and create 2-point shots out of seemingly thin air, it's harder for Dirk to drive, and harder to draw the double-team but mostly it's harder to win close games. For years and years, Dirk at the top of the key or on the baseline extended with the clock ticking down was the surest bet in the game. Now, maybe, it has to be downgraded to "one of the better ones".

No real surprise. In fact in general It's no surprise that an aging player relies less on his quickness and flexibility and again, by any measure, Dirk is still a load for opposing defenses. But it will be interesting to see what adjustments Dirk and the Mavericks will make now that the points may not come whenever he calls.

Update: Someone suggested to me that the changes in Dirk's game could be a response to Monta Ellis's presence on the court opening up some things and clogging up some others. As you can see here, the up-tick in threes was a feature of Dirk's game last year as well: 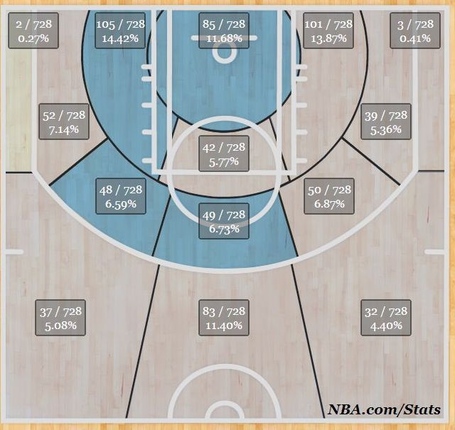 As was the decline in his percentages from long-2 regions: 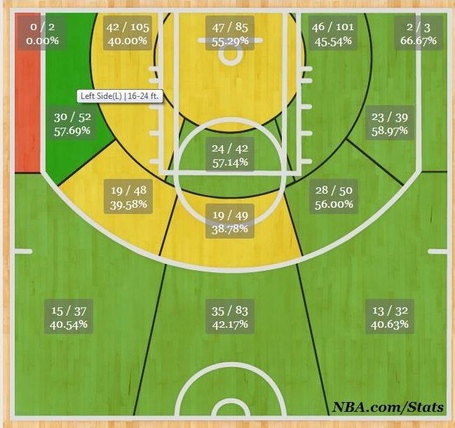