Ranking the Rankings, Week 1: Mavs firmly in the middle

In a new weekly MMB feature, we take a look at the different power rankings from across the web and how the Mavs are faring.

Share All sharing options for: Ranking the Rankings, Week 1: Mavs firmly in the middle

Nothing gets people going more than power rankings, right? And this is going to be your weekly safe space to discuss them!

In an effort to keep you, our fantastic readers, fully informed, we are going to start collecting the power rankings every week. This may evolve a little bit over the season, but the basic concept remains the same. All 30 teams, the rankings from six of the bigger sites averaged out and a little bit about how the Mavs are doing. Next week, there will be an added column comparing Week 1 to Week 2. Got it? Good! 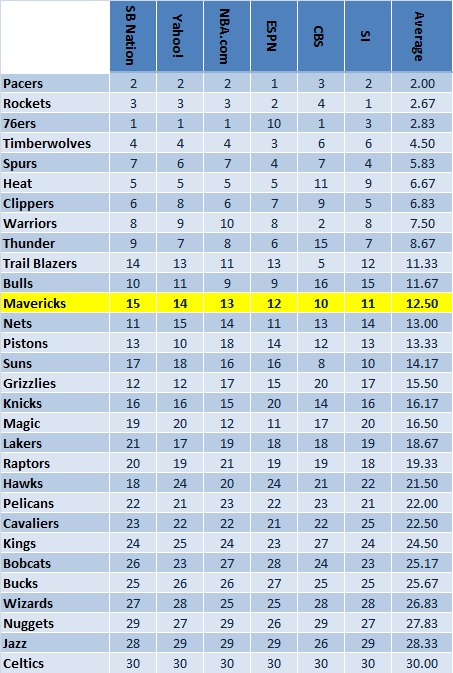 Monta Ball has been prevalent this first week, and it has actually been quite successful.

Monta Ellis is passing, Dirk is Dirking and this team looks like the good version they hoped for, early.

Three games into the new season, Dirk Nowitzki has already matched his longest streak of 20-point games from last season.