Ranking the Rankings, Week 6: So close, yet so far away

With their win over the Blazers, the Mavs move firmly into "almost top tier" status.

Share All sharing options for: Ranking the Rankings, Week 6: So close, yet so far away

It's been a weird few days here in the Metroplex. "Icemageddon" has had me mostly stuck in my apartment since Thursday night, with only my dog, League Pass and Twitter to keep me entertained. I'm a little stir crazy, but let's face it, that doesn't sound like a bad deal.

And it certainly hasn't been a bad deal for the Mavs this week. They've managed to string together some nice road wins, and make a nice move up in most power rankings this week. Let's get to it. 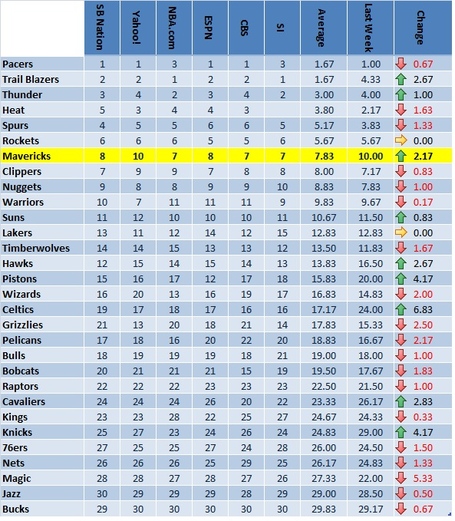 Though their defense comes and goes, Monta Ellis' game-winner in Portland on Saturday basically announced the Mavs as a team to be dealt with in the Western Conference. And though Ellis hit the big shot, it was one of Dirk Nowitzki's best offensive performances of the season. In fact, it was the first time he's recorded at least 25 points and seven assists since the Mavs' championship.

He wasn't exactly struggling before, but Dirk Nowitzki has been uber sharp over the last four games. With their main man averaging 24.3 PPG on 53 percent shooting in that span and Monta Ellis throwing in buzzer-beaters, Dallas found some road success after painful L's in Denver and Atlanta.

Rick Carlisle knows how to get a team to buy in, no matter the limitations.

The Mavericks are playing some of the best basketball in the league, but they're a center short of being considered a top-tier team. It might be worth calling Houston to see what the asking price is for Omer Asik, who would seem to be a perfect fit next to Dirk Nowitzki and the team's bevy of shooters.