Share All sharing options for: Shane Larkin: The Mavs' best draft pick since....

The Mavericks' last good draft pick, Josh Howard, was drafted the last pick of the first round in 2003 (second to last? Devin Harris?) . I imagine it surprises some of you to recall that J-Ho was drafted the same year as LeBron, Wade, Carmelo, etc.  So was Kendrick Perkins and Travis Outlaw, by the way. This means we've both had LBJ around a lot longer than it seems and that the Mavs drafts...well, you know.

One of my clearest memories of the early J-Ho days is that he and Marquis Daniels would do this thing I called "the Rookie Run". Even back then they were the only fast guys on the team, and if one of them got a steal, they'd both take off and I loved it because at no point would either of them pass to each other.  Every single time, whoever had the ball would fake it to the other and then try to lay it in.

They were often pretty successful, but, you know. That's what being a rookie is all about. Taking off without knowing where you're going to land.

So last night, when I saw Shane Larkin streaking off with a turnover in his hands, and then, at 100 mph, looking behind him to see Jae Crowder, and throwing a perfect pass that disabled the defense for a Crowder lay-in, I literally stood up.

It's been 10 years since the Mavs' last good draft pick. Allow me to introduce you to the next one: Shane Larkin.

So far, Larkin's committed the difficult to pull off double of managing to look pretty darn good every time out and also not necessarily...doing all that much. Last night against the Warriors, for example, I thought he did several things that caught my eye, but it translated to a 1-2 shooting night, with 4 assists, 1 steal, and 2 turnovers, in 11 minutes.

His career averages so far are an inspiring 3.5-1.9, with an 8.65 PER.  But despite missing all of training camp, and several weeks of the season, despite the fact that he is as green as they come on a team full of grizzled veterans, Larkin stepped on the court for his first game with a poise and confidence that the late, lamented Roddy Beaubois couldn't find after his 40-point night.

Poise goes a long way for PGs, I'd argue it's the major thing that Gal Mekel brings to the table. But Larkin also brings a deadly outside shot. Early returns from three have not been encouraging (a Jae Crowderesque 33), but he's been very good from a couple of spots on the floor, and since this is what he's advertised as being able to do, he'll probably improve. Along with that, he brings speed like only a few guys in the league have, and a willingness to get to the rim. 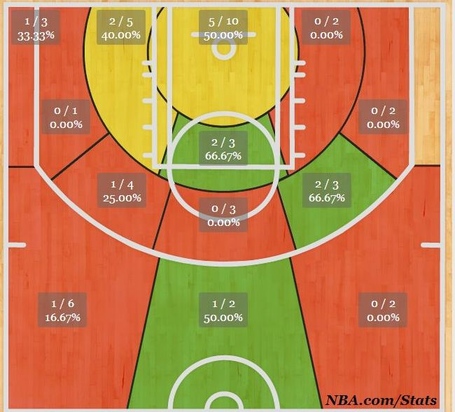 (see, there's some green there)

We need more results from Larkin, obviously, and he'll probably never be a star. If anyone else had though he'd be, he wouldn't have been available at the magic falling draft position the Mavericks had to burn.

But he has the skills to make it in the league, and he doesn't need some part of his game to appear out of thin air to make it happen. Everything he can do, he's already shown. Just has to figure out how to do it consistently and with fewer mistakes.