Getting Vince back on track

A change in role could be just what the doctor ordered for the 37-year old.

Share All sharing options for: Getting Vince back on track

No Maverick has gotten off to a more disappointing start than Vince Carter. Through 23 games, he is averaging 11 points, 3.5 rebounds and 3 assists on 38% shooting, the worst numbers of his career.

For the most part, the only thing amazing about "Half-Man, Half-Amazing" this season has been his shot selection. The obvious question is whether this is it. No one lasts forever and Vince is one of only six players left from the 1998 draft.

At 6'6 220 with a 6'11 wingspan, he has elite size for a perimeter player, one of the key reasons for his longevity. A shooting guard when he first got into the league, Vince is bigger and longer than a lot of small forwards. He can shoot over the top of anyone who defends him - a "skill" that doesn't decline with age. Even without the athleticism of his youth, he's declining from such a peak that he can still hold his own.

That, at least, was the story in his first two seasons in Dallas. However, in their late 30's, even the greatest players can fall off a cliff. His Synergy stats for 2013-2014 tell the tale; one of the NBA's greatest isolation scorers has not been able to create efficient 1-on-1 offense this season: 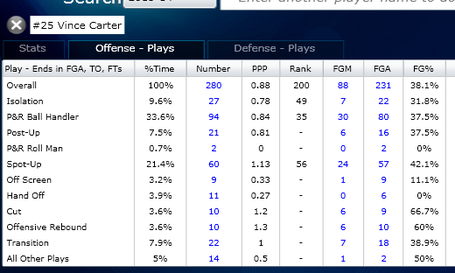 It isn't all bad news, though. The spot-up numbers are still pretty good.

You can see the pattern play out in the line-ups he's played in this year. In ones with more than 10 minutes played, the worst offensive rating (.75) is Larkin-Vince-Crowder-Dirk-Blair. That's one where he has to do the bulk of the work initiating the offense. The best offensive rating (1.29) is Calderon-Ellis-Vince-Dirk-Blair. In that one, the defense can barely afford to worry about him. He's the fourth or fifth option.

His performance on Saturday, in Brandan Wright's return, is encouraging. The two UNC products were great coming off the bench together, with a +18 rating in 16 minutes. Vince had 15/6/9 on 5-10 shooting. It was the Milwaukee Bucks, but still.

Going forward, Vince should be one of the main beneficiaries of the return of Wright and Devin Harris. Instead of having to carry some fairly uninspired offensive line-ups, he'll be a cog in one of the most potent benches in the NBA. Basketball is much easier if you catch the ball when the defense is scrambling as opposed to set. When Vince can attack a close-out, he's still a triple-threat player - shoot, put the ball on the floor or find the open man.

The ability to do multiple things is part of what made him such a great player. For all the knocks about how he relies sorely on his athleticism, he wouldn't still be around if he didn't know how to play the game. Vince didn't forget to play over the summer -- he just has to adjust to a new role.