Ranking the Rankings, Week 7: Mavs slide after up and down week

BWright may be back, but the rest of the week hurt a little.

Share All sharing options for: Ranking the Rankings, Week 7: Mavs slide after up and down week

You guys, I have some good news and some bad news. The good news is, Brandan Wright is back, and was able to carry a Dirk and Rick-less Mavs team to victory the other night. This can only mean good things for the team going forward. The bad news is, it didn't happen in enough time to offset two gut-wrenching losses.

Let's go to this week's numbers... 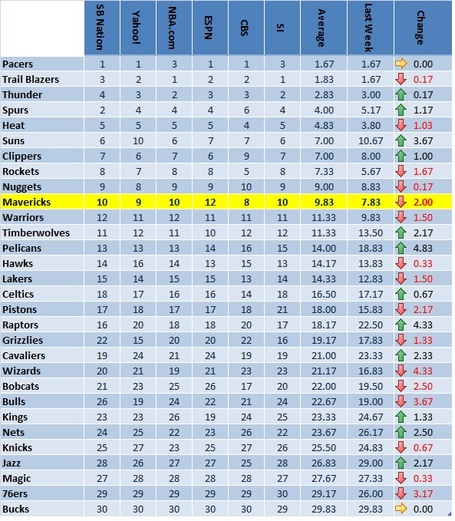 For the NBA Trade Theme Day, most of the SB Nation NBA sites talked about their team's status in the trade market and what scenarios might make sense. Here's an index of the posts.

As odd as it sounds, the Mavs appear to favor using Monta Ellis to take the big shot at the end of games rather than Dirk Nowitzki.

Sickening week for the Mavs. The Golden State collapse was their third road L by two points or fewer, following up earlier crushers suffered at Denver and Atlanta, before Dirk Nowitzki and Rick Carlisle were waylaid by twin illnesses that made the Cowboys' latest unraveling seem pleasant.

Jose Calderon, the solution to, and cause of, all their season's problems.

With Monta Ellis leading the team in time of possession, according to NBA.com, Jose Calderon has seen his playmaking numbers decline. Calderon's assist rate is only 22 percent, down from 39.8 percent last season in Toronto and Detroit, and his average of 4.5 assists is well off his career mark of seven. But Calderon is still making an impact as a shooter, recording career highs of 46.9 percent from long range and 2.7 three-pointers per game.