The Mavs take a small fall in our composite rankings this week, as expected.

Share All sharing options for: Ranking the Rankings, Week 8: A little expected fall

Merry Christmas Eve, Mavs Moneyball readers! We love you dearly. Because we love you, here is your weekly dose of power rankings. Keep in mind that these rankings do not reflect last night's win over the Rockets -- which should certainly help matters next week. 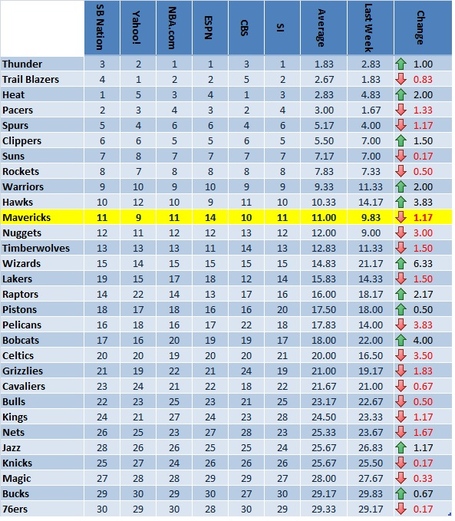 Shawn Marion and Dirk Nowitzki start every game together and have played about the same number of minutes. Yet one is a minus-100 and the other is a plus-138. Nowitzki's obviously the better player, but that discrepancy is kind of crazy. The Mavs have outscored their opponents by 16.0 points per 100 possessions in 309 minutes with Jae Crowder and Nowitzki on the floor together.

Not much has gone right since that signature win at Portland on Dec. 7. Samuel Dalembert is suddenly losing minutes to both DeJuan Blair and Brandan Wright, while the Mavs' porous D, after failing to hold nice leads at Atlanta and Golden State, just let a fat cushion slip at home to Toronto.

They seem like a better-than-.500 team, but their efficiency differential is less than a point. I need to see more of them before I can figure out what they are.