After a rough stretch of games, the Mavs fall back down to earth a little in the rankings.

Share All sharing options for: Ranking the Rankings, Week 5: the roller coaster begins

Hello everyone! This week has been a tad rough for watching Mavs games, though the win last night was certainly a welcome change (I guess. I missed the first half but I hear it was atrocious. Thank goodness for Dirk, huh?)

Let's take a look at how our rankers dealt with the stress of the Mavs falling back to earth a little bit. (Just a reminder, these rankings do NOT reflect last night's game.) 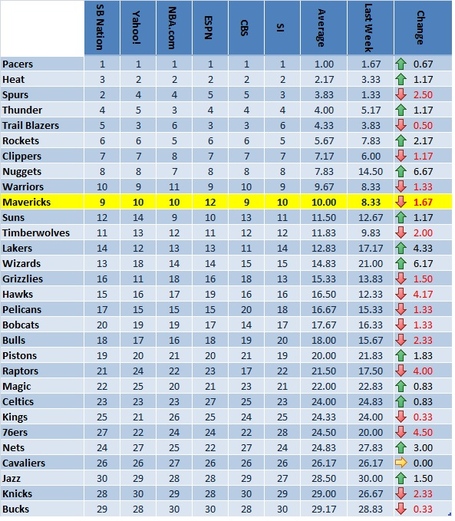 After a 6-1 stretch, the Mavs have lost four of their last five. It's been a mix of bad offense and bad D, so there are no easy answers, though they could just blame the schedule, having played six back-to-backs in November and 11 of their 18 games against teams at or above .500. But they have another back-to-back early this week and then head out west to face the Blazers, Kings and Warriors.

The Mavs have scraped through a November that served up six back-to-backs in passable fashion, but the reality is they haven't played well since that stirring fourth-quarter comeback at home against Houston, losing their grip on what would have been handy road wins in Denver and Atlanta.

Their defense has started to hemorrhage. They have to score the pants off everyone in order to not lose their shirt.

The Mavericks can't foul their way to respectable defense. Dallas has allowed the most free throws made and attempted in the league, while owning the No. 27 unit in defensive efficiency (104.8).