Part two of my weekly series highlighting some key stats. Some observations from the early stages of having a legitimate Sample Size.

Quick Note: I'm sorry that I didn't get an edition of statsketball up last week, for anyone who might have been looking for it. Real life got in the way, but I'll try not to let it do that too often.

After the incredible win against the Trail Blazers on Saturday night, the Mavericks have played 21 games in the season, and are out of the realm of small sample size data. We're at the point in the season where we can start looking at shooting percentages and other stats as legitimate and sustainable for the course of the season (sorry, JR Smith).

As Mavs Outsider contributor -- and friend to Mavs Moneyball -- Bobby Karalla (@BobbyKaralla) pointed out to me, 14ish games is usually a good point at which to start considering the statistics legitimate, because very few hot or cold streaks last longer than 14 games. This is true, and a great measure if you're just eyeballing some stats.

In fact -- and I'm going to do my best to keep this simple and short -- there's a lot of math to defend the argument that 12-14 games is a good point at which to consider the number of games played as a legitimate sample size to draw conclusions from.

The logic works like this: stats are legitimate when you can look at a stat and expect that it will be maintained as the average for the rest of the year. If we can look at Dirk's stats and say, "yeah, a 60.1% True Shooting Percentage sounds like what he'll shoot for the rest year," then you've got a legitimate sample size. 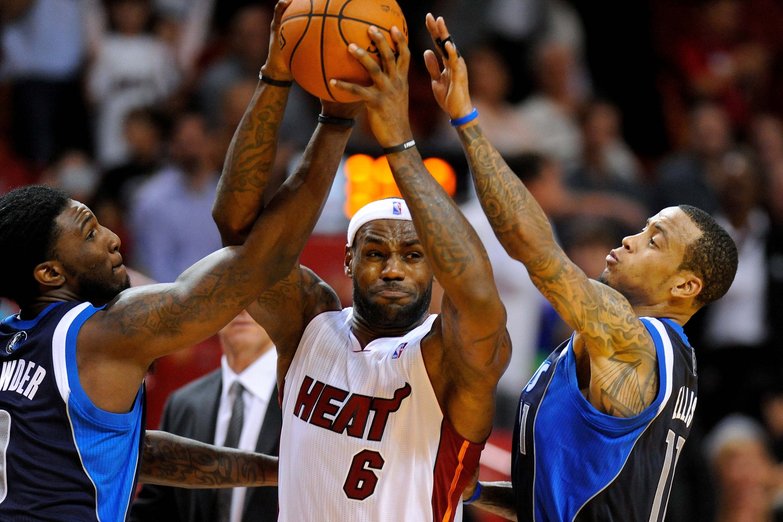 The First Edition of Statsketball

In math terms, that means that you have a real sample when the expected value of a certain shot (i.e., when every time Dirk fires a shot you EXPECT it to go in half the time) is the same as the average.

I'll spare you the specifics of finding out when samples are legitimized, but, for shooting percentages, it turns out to be right at 12 games for the entire league (though here's a link to a good math-heavy explanation if you're curious, and you can always reach me on twitter or by email for explanation).

When it comes to other stats, like +/- or SportsVU data, the sample can actually be much smaller and still be legitimate. At what point, exactly, is unclear, but I'd venture that it's around 6 or 7 games.

So here's why I wait until 20 games: at 20 games, there's a roughly 95% confidence that any player's shooting percentage is an accurate average for the whole season. At 12 games, there's below 90% confidence. Meaning, that while the averages are statistically significant at 12 games, they aren't necessarily going to be maintained long-term (though the likelihood is good). Correspondingly, the confidence that PER and the like are maintainable for the course of the year is nearing 100% by now.

So, it is at this point in the year that we can start looking at shooting percentages and being comfortable that they're an accurate reflection of each player, with the caveat that basketball has so many players and so many variables that a lot of this is subject to some change. That said, that aspect of these kind of stats calculations makes it all particularly interesting, because a player "beating the odds," so to speak, tells you a lot about their improvement, drive, work ethic, and so on.

Essentially, we're at a point where we have to start thinking about shooting stats as sustainable. That means that Monta's 56% True Shooting %, Jae Crowder's 58% TS%, and Vince's 37% FG% all have to be taken with a requisite seriousness now. These guys are for real, one way or another.

So, without further ado, some observations now that we're officially dealing with legitimate sample sizes.

Wow, the defense is really bad

This tells us a few things: first, holy crap, the defense is so bad that Dallas is hanging out with the likes of the tanking Orlando Magic and the "dumpster fire" New York Knicks.

But, this is a two sided coin, and it's hard to know whether to take this optimistically or as a warning. On the one hand, the fact that the Mavericks still have a positive point differential despite the league-bottom defense suggests an incredibly high-octane offense. We knew, more or less, what we were getting into before the season started, and a blistering offense and embarrassing defense was a part of the package. The positive point differential is all that matters, right? Mavs are generally outscoring teams, right?

That's probably the case, ultimately. The Mavs will sit in the bottom 10 in defense and top 5 in offense and eke out a pretty damn good record in the process.

The low-probability concern is that if every other bad defensive team is also just a bad team, there's the chance that the Mavs' success is a fluke, and they'll either improve defensively, or find themselves losing games.

Just something to watch going forward.

This is not ideal. The Mavs are giving up an absolutely appalling amount of transition attempts and defending them at a league bottom rate. Usually, that's a recipe for disaster.

The mitigating factor, here, is that any team that plays with a high pace and gets a lot of transition opportunities is going to give some up on the other end. The Mavs play fast. It makes sense that the other teams play fast against the Mavs, too.

But still, ideally, if the Mavericks are scoring on a high percentage of their transition opportunities, they should still be slowing the other side down when they get the ball, a la Miami or San Antonio. But, instead, the opponents are actually averaging slightly more transition opportunities per possessions than Dallas, and they're converting them at a way-above-league-average rate.

It's interesting that, per Synergy, the Mavs' defense isn't terrible everywhere else, and that just making transition shots and then stopping the ball after the make could make a massive difference in Dallas' defense. Containing other teams in the open court could boost the Mavs' defense all the way up from 9th worst to decidedly middle-of-the-pack.

Some full court presses after transition shots might be in order.

Wow, This Offense is Amazing

I'm not going to belabor many of these points, because a lot of this is stuff we already know. Mostly, I just wanted a chance to celebrate what this team is doing well, in addition to worrying about the other stuff.

Dallas is fun. The fact that the Mavs score so well, and particularly that they score well through creation for others, transition opportunities, and Dirk post-ups, is why they're so much fun to watch.

It's worth keeping an eye on that the Mavs have the most efficient transition offense in the league while only actually being 9th in pace. It'll be interesting to see whether transition attempts increase and efficiency falls or whether the relationship stays the same.

This is particularly interesting and telling because a high True Shooting Percentage tends to indicate really good shot selection, since it biases three point shooting and free throw shooting. "Good shot selection" is a far cry from last year, when the Mavs were at the top of the league in long mid-range jumpers. Now, the offense is much more inside-out driven.

It's also a little funny that a team that prominently features Monta Ellis, Vince Carter, and Shawn Marion would have what most teams consider "good shot selection," but there you go.

Dirk is currently the only player above 30 years old with a top 20 PER (Player Efficiency Rating, John Hollinger's holistic measure of NBA talent), and he's 35. 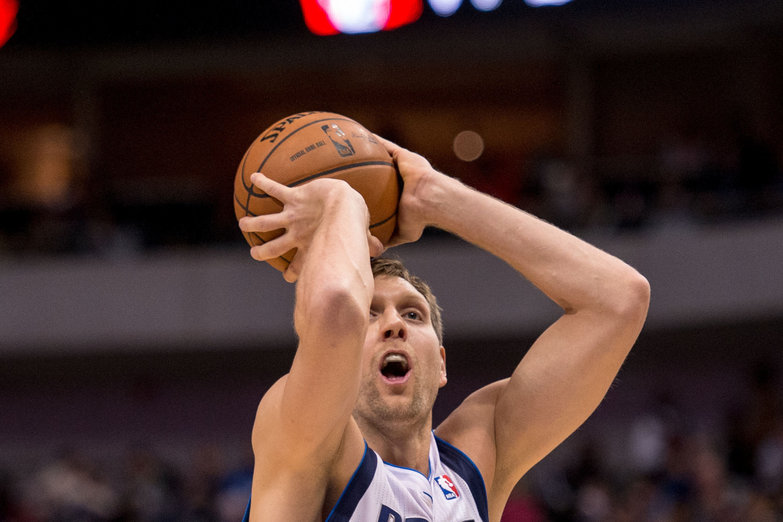 As mentioned earlier, Dirk is the 3rd most efficient iso/post-up player in the NBA, per Synergy.

Dirk is the 3rd best scorer coming off of screens, per Synergy. He's the 26th best scoring roll-man.

He has a True Shooting % above 60. The Mavs are 7.5 points per 100 possessions better when he's playing.

And, despite everything, it seems like he has still lost a step. Dirk is amazing. We're all lucky to have him.

What in God's Name Happened to Vince Carter and Why Does His Offense Look Like a Deer That Just Got Run Over?

Look, this sucks. I love Vince as much as the next guy. Especially last years' Vince. This is hard for me. So, instead of talking about this, I'm just going to show you these two shot charts.

This is the Mavs' starting lineup: 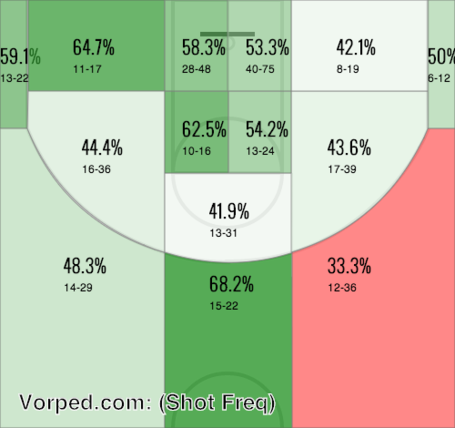 And then this is the Mavs' starting lineup with Vince Carter substituted in place of Shawn Marion: 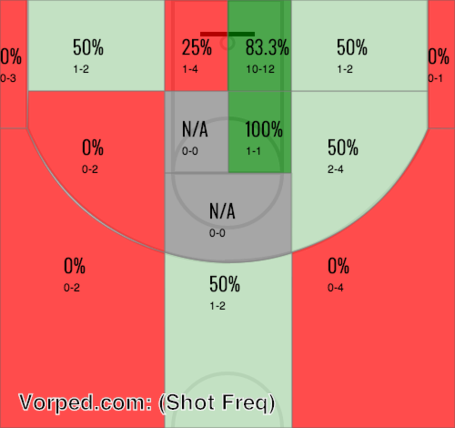 Perhaps the most concerning part of now having legitimate sample sizes is the real possibility that Vinsanity could be playing this badly for the rest of the season. The other MMB guys and I were talking, though, and the odds are pretty good that Vince rebounds into form at least a little bit. He is a career 40% 3 pt shooter, and shooting doesn't tend to decline with age. His 34% shooting from deep should get some small bounce.

That said, it's not really his long-range shooting that's the problem. The real problem here is that Vince is shooting only 37.8% from the field.

Almost 21.5% of Carter's attempts are coming off of Isolations, Post-Ups, or crazy end-of-shot-clock plays. That number is far higher than your average guard, and he's averaging below 80 points per 100 possessions on those attempts.

One of those numbers is far too high, and the other is far too low. Vince has gotten incredibly trigger happy when he's moving away from the basket in the midrange, and he needs to pass out of those situations. The one foot fading leaners have to end. Similarly, Carter is taking too many shots where he could step back past the three-point line. He seems to be lacking an awareness that he had last season, and it's incredibly frustrating.