In a close game that goes down to the buzzer, everyone likes to second guess the final moments. Except a basketball game is much more than that and the Mavs had some bone-headed possessions that ended up costing them in a 1-point loss to the Spurs. Plus, some extended thoughts on Carter's shot

When Vince Carter's potential game-winner bounced off the rim and the Mavericks lost a grueling contest to the Spurs on Thursday night, much of the outcry came from the final moments and Carter's shot. While it's easy to point to that play as the reason the Mavs lost (conventional basketball wisdom says shooting a 3-pointer down one point is SOFT AND WEAK), the loss was much more complicated than that.

Two plays in particular come to mind. In a close game, every possession matters. And when you're a relatively average team (like the Mavericks depressingly are) going against an elite one (who once again the Spurs frustratingly are) there is almost zero margin for error.

Before we get to the two plays in question, some thoughts on the final shot from Carter.

While any last-second shot that isn't from Dirk Nowitzki can be deemed a poor play call, our own Tim Cato summed up the play quite well. The Mavericks don't have anyone to reliably handle the ball and initiate offense. When Jason Kidd was around, Carlisle crafted a beautiful and simple measure of getting Dirk the ball with under 10 seconds left by using Kidd as the inbounder:

Here's one against the Bucks:

Here's a slightly different version, but the overall theme remains the same with Kidd initiating the play:

Without Kidd, who is Carlisle supposed to ask to inbound the ball? Darren Collison? Mike James? There's no one left that Carlisle can trust (another issue altogether), so the play the Mavs got last night is the result. Also, I'm sure Carlisle knows as well as we do that Dirk simply isn't moving around like the old Dirk. Carlisle noted it in last night's presser that with that few of time left, and against a team that knows the Mavs as well as the Spurs, Dirk was going to get instantly swarmed or have a difficult time making a move from outside 3-point line.

Then there's Carter's shot altogether. Why did he shoot a three? Why didn't he just drive past Tiago Splitter and pull up for a closer shot? Here's why: 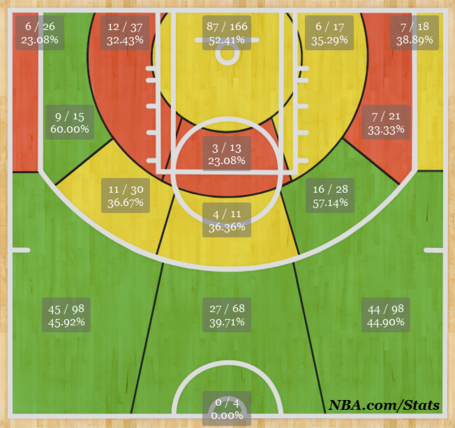 Believe it or not, Carter is actually a significantly better shooter on above-the-break 3-pointers than a majority of spots inside the line. Carter was moving to his left off the pick, which is right into his wheelhouse. Let's not forget, Carter won the Mavs previous game against the Bucks by nailing three 3-pointers in the fourth quarter, with them coming off the same action as last night's shot. My Synergy Sports also says that Carter is shooting an insane 20 for 45 on three points as the pick and roll ball handler (44 percent).

So the shot was a good one in the grand scheme of things and relative to Carter. What's worrying is that the Mavericks don't have a way to get Dirk the ball with under 10 seconds left. That falls onto Carlisle and he has to scheme up a new way to make sure Dirk isn't a decoy on every single last-chance shot. It doesn't help that these Dirk quotes after the loss are especially worrying:

"I was kind of in [Carter's] way, I don't think I necessarily liked the play call. We knew they were switching, I probably should have got out and let him create with more room up there."

Now onto the two awful plays:

via assets.sbnation.com and the handsome Ben Swanson. Click to animate!

I'm going to be blunt here: Kaman's attempt at a one-man fast break in the third quarter was one of the most selfish, idiotic and worst basketball plays I've seen at a professional level. Am I being too harsh? Most assuredly. But when the Mavericks are scraping and clawing against a team that is better than them on the road, they cannot survive mistakes of this magnitude and suck-titude.

At no point does Kaman even make an attempt to slow the ball down or even hand it off to Mike James who is running with him to his left. He doesn't even appear to be looking at his options, just a full-bore, head-down sprint to the bucket. It's like he doesn't even see Spurs guard Cory Joesph in the way (spoiler alert: he doesn't) and he just barrels into him for one of the easiest charge calls of this generation. He appears to give a quick glance to James before plowing into Joesph, but it's too late.

This play, along with Kaman's final line (14 minutes, 6 points, 1 rebound, 3 turnovers) should have him banished to the bench for the rest of the season. Never before has the one-year contract plan been so personified: it just looked like Kaman gave no thought about the team and just wanted to grab the score himself while maybe trying to convince a senile 70-year-old scout that he's still young and spry. After that play, I wanted to hurl my remote at the TV and while I'm being insanely over-dramatic, I never want to see Kaman on the floor again.

If the Mavericks are serious about fighting back into the playoff picture, they need to weed this type of play out. That play just highlights what's wrong with this team and how some players just don't get it.

This happened toward the end of the third quarter, with Dallas grabbing a steal and off to the races, with Mayo leading the charge and Elton Brand and Darren Collison on his wings. Manu Ginobili is the lone defender and Mayo gets into the paint, just below the free throw line before deciding to loft a jumper that misses short badly. Another wasted chance at a score.

Mayo gets a little less scrutiny here, mainly because Kaman's play just overshadows it in overall suck-ness. But it's still an awful play. Mayo has been hitting jumpers very well in transition this season but those are usually 1-on-3 or 2-on-2 situations. This time, Mayo had to find a way to get the ball to the rim. It wouldn't have been hard, just drop the ball off to Brand and Ginobili would have been forced to foul (I say Brand and not Collison since Ginobili would have an easier time contesting that shot without fouling).