Dallas and Cents: Dirk Will Save Us

After a huge win, some links around the internet

Share All sharing options for: Dallas and Cents: Dirk Will Save Us

Before getting to the links, I awoke this morning to the above photo-shopped picture of everyone's favorite German, Dirk Nowitzki. The picture was made by a college friend of mine and Blazer fan, Jeffrey Rozman. He actually sent me this gem as well, but it didn't look as sharp on as the main photo... 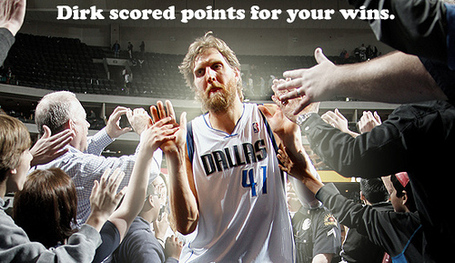 So thanks Jeff, this was a fun photo. And it's also the perfect transition into our first link.

1.) The fantastic folks at Deadspin put together a picture history of Dirk's beard here. I keep expecting something to jump out of it, like a hawk or something.

2.) Kelly Dwyer over at Yahoo's Ball Don't Lie with a good take on Lamar Odom's confused position on apologies and responsibility.

Point fingers & talk shit, I can handle it!!

We WILL sir. We will.

4. The comments from Blake Griffin and the Clippers regarding the offensive foul Griffin committed at the end of regulation are absurd. Let's chat more about all the terrible calls that went against Dallas and were either missed or incorrectly called throughout the game. Dallas beat the Clippers.

5. Grantland has another little bit about Dallas worth checking out.

6. Want a Mavs Moneyball shirt? Of course you do. Hit us up in the comments for any suggestions about item designs if you have any

7. Ron Artest is out indefinitely with a knee injury. I hate to see anyone get hurt, but I'd be lying if I said this was anything but good for the Dallas playoff hopes. The Lakers can't defend anyone and having a solid defender go down only makes them worse.