Should the Mavericks draft a "tweener", "stretch", or "combo"?

Share All sharing options for: Should the Mavericks draft a "tweener", "stretch", or "combo"?

One of the things the Mavericks do a lot of, draft wise, is look for guys who present match-up problems. Whether it's a combo guard-generally a guy with good handles who's a bit large and strong for opposing PGs to defend (DoJo, Cunningham, Foster, Ager)-or stretch guys (Nick Fazekas, et al.) they're always looking for someone who can make unimposing defense sweat.

We could put this question another way: are the best players in the NBA matchup problems because of their skill set because of who they are? Obviously, there is no easy answer.

All these guys are matchup problems, so it can hard to know whether it has more to do with their physical skillset or unusual game, or because of their unusual talent in traditional roles. True, for example, Deron Williams at 6'3" and stocky is a pretty big PG, but here's his shot chart: 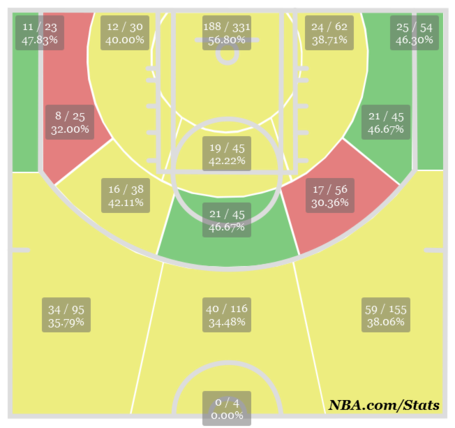 As you can see, he didn't do a whole lot of posting up; at least not effectively.

The physicality of Kevin Durant and LeBron James are obviously big aspects of their offensive abilities. Kevin Durant's height and guard-like quickness complement his incredible shooting touch to make him the most devastating scorer in the game. LeBron is a guy who can play four and maybe even five positions on offense and guard five on defense. If the Mavericks can draft LeBron or Durant, I advise them to do so.

However, I would argue that Chris Paul, James Harden Stephen Curry and Kobe Bryant are very traditional players. Paul is a pure point guard as they come, Curry is getting better on that end, while Bryant and Harden are pretty traditional twos. True, both have uncommonly high assists totals for shooting guards, but neither is in the top twelve among 2s in assist to turnover ratio-in fact, both finish behind the Mavericks' own OJ Mayo.

Tim Duncan, obviously, is as traditional center as they come (even though he is supposedly a power forward). I'll grant you that Brook Lopez is a stretch five if there ever was one. But despite his impressive PER, he's not in the top ten for win shares, offensive win shares, or offensive rating, although he does seem to have improved his defense.

To me, what the interest in players who play out of position suggests is a focus more on what a coach can do then on what a player can do. Given the good coaching he Mavericks have enjoyed for so long, and where they typically draft, there is something logical about this. More than that, they have made at least a token effort lately to draft big men who play like big men, Bernard James being the major example, but even a guy like Ahmed Nivins. They tend to do this pretty late in the draft, but then, they tend to draft pretty late into the draft.

I think it's still likely that the majority of players who contribute in the NBA, probably a vast majority, are players who perform the traditional roles associated with their position. Correspondingly, it's likely that if the Mavericks want to finally strike some draft gold, they should steer clear from guys who do unusual things at usual positions and just grab a guy who can do the usual.