Cuban has recently said that he's no longer interested in signing players for one year at a time. What does he plan on doing then?

When confronted with the question of whether or not the Mavericks will land a max-level player, Cuban responded by saying :

We can play it both ways. We can go and put together a better team by signing multiple guys to multi-year contracts. We won’t sign anybody to a one-year deal. They’ll all be four-year deals because that gives you the most flexibility if you stretch them...Just to explain some more, you can sign a guy to a four-year deal and only have $10 million dollars guaranteed. If you cut him and want to stretch him, you take the guaranteed money only and divide it by the number of years times two plus one. So you can stretch that contract out over nine years as long as you do a four-year deal. There’s a finite amount that you’re allowed to total and stretch, but that’s more of a financial issue more than anything else.

In the words of our own Josh Bowe: "The one-year deal thing is dead."

Personally, I disliked the one-year deals as much as everyone else, so I'm thinking, "good-riddance." I know that a lot of people hated what the deals did to team chemistry and whatnot, but personally, I just hated having the team in flux.

It's hard to get excited about and really root for a team that you have to spend the entire year judging and measuring for next season. It's like having a rental car. Usually, there's nothing wrong with rental cars. Hell, most rental cars are much nicer than my car. But something about the fact that your ownership of the car is temporary, and something about knowing that your ownership is temporary, makes driving the rental that much less satisfying. It's just hard to root for a team that you know won't look even remotely similar in less than a year.

All of that said, my concern here is that if there was ever an offseason to do the one year deal, it was this offseason.

I've written a couple pieces about the 2013 free agent market now, and every time I write a new one, I get at least one person who says, "Jesus, the market isn't really going to be that bad is it?"

Well, yes. It is going to be that bad. Sorry.

Everyone knows the two superstars on the market, but Chris Paul has reportedly told the Mavericks to, essentially, not bother, and it's unclear whether or not the Mavericks even have the money to pay Dwight -- even if they could get him interested -- whereas the Rockets and Hawks definitely have both the money and the appeal.

Other than those two, there's really no one out there. A budding superstar who very possibly may not actually play to his full capacity ever again in Andrew Bynum; the perennially injury plagued Greg Oden; consummate bad decision makers in Brandon Jennings, Nate Robinson, Jerryd Bayless, JR Smith, and (to a lesser extent) Jarrett Jack; some aging defensive players in Dalembert and Allen; and then nobodies like Nazr Muhammed. Yes, there are more players than that, but is there anyone more interesting? Anyone really worth mentioning or discussing? I didn't think so.

This would be the perfect offseason to do something completely insane while there are no better options, like giving Jennings the near max, or signing Bynum and JR Smith TOGETHER, but for only one season so it doesn't hurt long term.

Instead, Cuban has decided that this will be the offseason in which he commits real money. Perfect.

Of course, Cuban does lay out his "backup plan," so to speak, in the case of the long-term signings going awry: sign each player specifically for four years, partially guaranteed, so that if/when the player doesn't work out, Cuban can just waive them and use the stretch provision.

Using Cuban's example, let's go ahead and say the Mavericks sign someone to a four year, 10 mil guaranteed contract. At best, this is a partially guaranteed deal with Jarrett Jack, but it could also be fully guaranteed for someone like Gary Neal. So let's say Jack/Neal shoots 30% from the field, never passes the ball, refuses to play D, and is just generally horrible, so Dallas waives him. Even once they've used the stretch on that 10 mil, the Mavs now have 1.11 million a year committed for the next 8 years in the future. Over what? A failed point guard who lasted half the year?

That may not seem like much, but remember that the Mavs are seriously considering trading the 13th pick to make cap space for Howard. The cost for that pick is estimated at 1.66 million on the rookie deal. If spending one and a half million for two years of real potential long term talent is too much, then why are we even considering putting two and a half million on the books for EIGHT YEARS for a highly dubious gamble? In 2014, that 2.5 million could very easily be the difference between landing Kyrie Irving and Kemba Walker.

I say all of this without even mentioning the PR damage that Cuban and the Mavericks would incur from signing three guys to four-year, partially-guaranteed deals and then waiving two of them. Who would sign with the Mavericks after that, knowing that Cuban could pull the trigger on them at any moment? It's not exactly the best plan for building an attractive free agent destination.

And lastly, what does the office do if they decide to waive one of these guys mid-season? Who do they pick up? Another Mike James?

Realistically, part of the problem is that the front office is stuck between a rock and a hard place. The Mavericks are officially out of the playoffs and into "rebuild" mode, but the city and fanbase still have the memory of the Championship fresh in mind, and want success now. Sadly, good rebuilds take time. 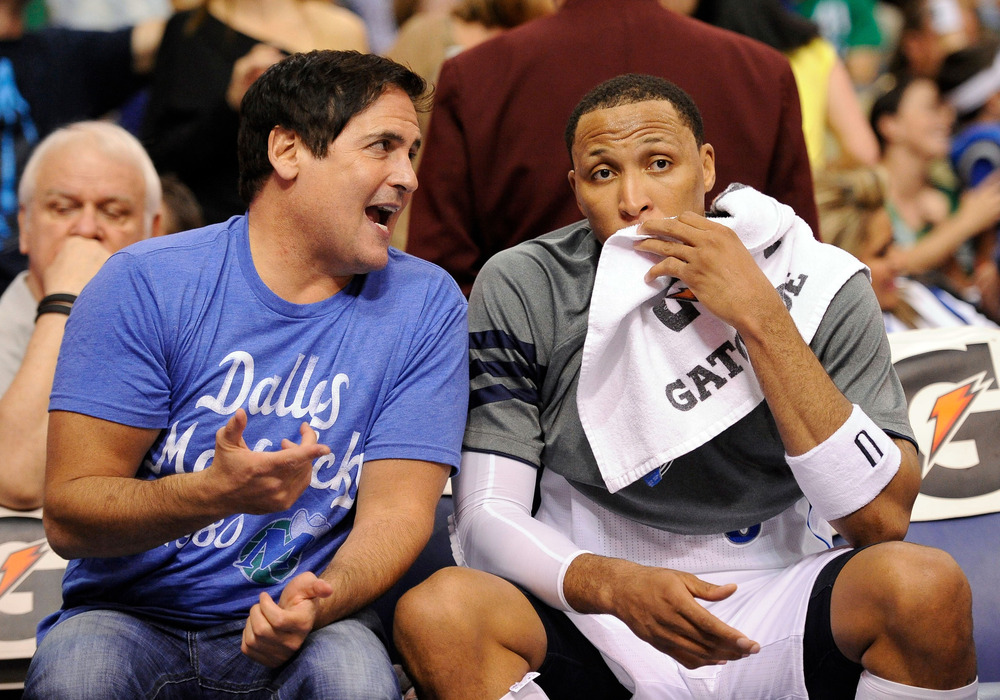 Plus, on top of the pressure, Cuban is still a fan first, and a fan who probably wants to be good again more than any of us can imagine. So, he's strictly adhering to the "two year rebuild" plan.

The premise of this rebuild just sounds really flimsy to me, though. Essentially: sign a bunch of guys to four year contracts this off-season, waive the ones that don't work, hopefully have a 1st, 2nd, or 3rd option in the bunch. Next season, land another main option. Bingo, the Mavs are competitive again.

But...how does Dallas sign another core guy going forward if he has no confidence in our team or our office, and how does someone buy into the concept of a bright future for Dallas if there's no money to keep building?