There are a lot of rumors that the Mavs will dump their highest pick in 13 years to clear cap space. Let's hope they aren't true.

Share All sharing options for: Don't Punt The Pick

Almost as soon as the lottery ended, speculation began that the Mavs were looking to move out of the first round. The logic is simple. Sitting at No. 13, Dallas appears locked out of the top-tier of a draft that isn't considered particularly strong. And with the team set to pursue Chris Paul and Dwight Howard in free agency, every bit of extra cap space helps. However, as great as a second star would be, pursuing one has become the Mavs white whale. Once again, the organization is putting the cart before the horse.

A year ago at this time, Deron Williams was their top priority. As a native son playing for a team with no clear path through the Eastern Conference playoffs, he looked like the perfect fit. Much has been made of Mark Cuban filming a reality show instead of wooing Williams personally. In reality, if he thought Dallas was the best place to compete for titles, he would have gotten over it. The real issue, as Williams told the leering press, was "the future of the team, other than Dirk."

Once again, the organization is putting the cart before the horse.

When Williams looked at the Mavs, he saw a team built around a 34-year old star without much young talent. If he signed with Dallas, what would happen if Dirk missed a significant amount of time? A year later, there's still no real answer if Paul and Howard ask the same question. While a rookie isn't likely to sway their decision one way or the other, the No. 13 pick is an asset that can be turned into a quality young player, something the Mavs desperately need. There's no reason to just give it away.

The 2013 draft is relatively weak, especially in comparison to 2012 and (most likely) 2014, but there will still be plenty of well-regarded prospects available at No. 13. It's somewhat misleading to look at the average return for that draft spot, because there are good players taken well into the 20's every single year. The 2011 draft, considered the weakest in recent memory because of the impending lockout, is a good example: Kawhi Leonard (15), Nik Vucevic (16), Iman Shumpert (17), Tobias Harris (19), Kenneth Faried (22), Reggie Jackson (24) etc. etc.

Given how unsettled things are in the Top 10, it's hard to say exactly who will be available when Dallas goes on the clock. The "beauty" of the Mavs situation is that it doesn't matter. There are so many holes on their roster that, regardless of who falls or rises over the next two weeks, they will be able to sift through a number of options who can help right away and well into the future. They can sit back at No. 13 and let the draft come to them. That's what happens when you have questions about three different positions -- PG, SG and C. 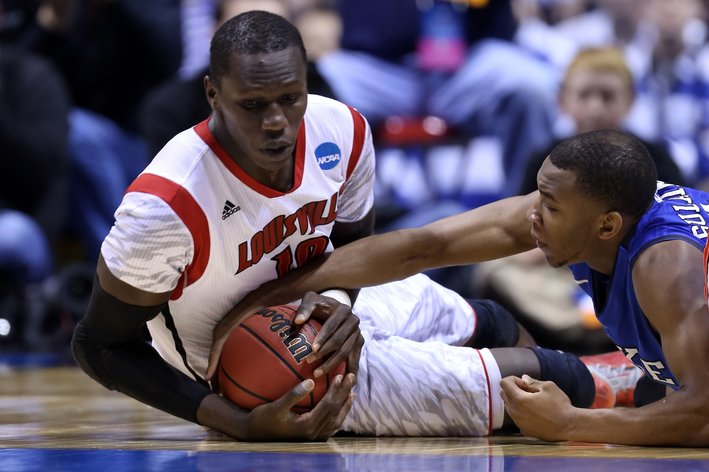 Why Louisville's star center is one of the safest picks in this year's draft.

Among this year's PG's, Trey Burke is the only lock for the Top 10. Even if there's a run behind him, at least one of Michael Carter-Williams, CJ McCollum and Dennis Schroeder will be there at No. 13. Of the three, Carter-Williams is the most intriguing physically, McCollum is the best shooter and Schroeder might have the best all-around package of tools. Personally, I'm a big Carter-Williams fan. However you rank them, though, all are far better options than what the Mavs currently have at the position, which is essentially nothing.

SG, meanwhile, might be the deepest position in this year's draft. Even after Ben McLemore and Victor Oladipo, there are a number of starting-caliber players on the board. Kentavious Caldwell-Pope, a 6'5 205 former McDonald's All-American with an NBA-ready three-point stroke, is projected to go in the 10-15 range. Jamaal Franklin, a jack-of-all trades dynamo, would have been a sure-fire lottery pick with a more consistent jumper. Allen Crabbe and Reggie Bullock, 6'6+ pure shooters with size and athleticism, will be there too.

Perhaps most intriguing is the center position. Asides from one glorious year with Tyson Chandler, C has been a black hole for the entirety of the Dirk era. You have to overpay them in free agency and even mediocre ones are rarely available in the 20's, where Dallas has picked for the last decade. This year, they could play it safe with Gorgui Dieng or Mason Plumlee, experienced centers who can contribute immediately on both sides of the ball, or roll the dice on a high-upside gamble like Steven Adams or Rudy Gobert.

The bang for your buck opportunity is too good to pass up.

No matter how you view the various options, the bang for your buck opportunity is too good to pass up. These are the cap charges for last year's No. 13 pick: $1.6 million as a rookie, $1.7 million as a second year-player and $1.75 million as a third-year player. It's essentially impossible to find a starting-caliber player in free agency at those prices, much less one with any upside. Having quality young players on cost-controlled contracts is how a team becomes a free-agent destination in the first place.

I'm not nearly as up on cap matters as some of the other writers here, but Tim Brown had a good piece on the different ways the Mavs can clear cap space this off-season. Point being, there are ways they can do it without punting their highest draft pick in 13 years. Even if the math for keeping the pick doesn't work out, they can still take a European player and keep him overseas (read: off the cap) next year. At the very least, they could take a flyer on Giannis Adetukonbo, an 18-year old from Greece with tremendous upside potential.

As someone who covers the ins and outs of the NBA draft year round, I like to imagine I have some feel for this year's crop. Nevertheless, I'll admit that projecting 18-21 year old basketball players is inherently risky. Even the Spurs don't get every pick right. The key is giving yourself as many opportunities as possible to find young talent. Years of neglecting the draft are why the Mavs so desperately need to hit a HR in free agency this year anyway. They might still miss on the pick, but there's no excuse not to even try.