The Mavericks have one of the most talented summer league rosters in recent memory, but one player in particular stands out.

Share All sharing options for: Why Jae Crowder is the most important player to watch during the summer league

At 5 o'clock (CST) today, the Mavericks' summer league team will get into action for their first game in 2013's trip to Vegas. Despite the disappointing news that Shane Larkin will be sidelined with a broken ankle, the Mavericks still have a host of interesting names and players on the roster, such as the enigmatic Ricky Ledo or the foreign Gal Mekel.

However, I think the most interesting player is one Maverick fans are quite familiar with -- second-year player Jae Crowder.

Crowder had a weird rookie year as a second-round pick who broke into the rotation of a veteran-friendly coach to the tune of 78 appearances and 17.3 minutes per game. Despite the big minutes, his stats show that he was relatively ineffective -- 5.0 ppg on 38% shooting from the field and 32% from behind the line.

As I said continually throughout the season, Crowder excelled at doing the little things -- as any four-year player at Marquette ought to -- but struggled at the "big things", like shooting. While it's refreshing to see a young player who already knows how to slide over to take a charge or is smart enough to cut to the basket when Dirk is doubled in the post, it's more important that you have a true shooting percentage over 50% (Crowder's TS% was a morose 49.1%). Although it seemed like Crowder finished the season on an upwards trend, his offensive game actually peaked in February and tumbled back down the final two months.

But Crowder is young -- he turned 23 earlier this month -- and has a great work ethic. Playing that much as a rookie means the Mavericks and Carlisle clearly saw something in him, and eventually they have be right about a young talent, right?

Playing that much as a rookie means the Mavericks and Carlisle clearly saw something in him.

If you've read virtually any basketball blog over the past few months, you've surely heard of the expression "3-and-D". For an example, look no further than the NBA Finals, where Miami trotted out Shane Battier and San Antonio started Kawhi Leonard and Danny Green. Each player is a prolific shooter who helps spread the floor (crucial in today's NBA) while pestering and aggravating the best wing (usually) on the opposing team. Thus, three and D(efense).

The best of these players are good or great at both; less talented players can still do the same by being great at one and average at the other. For example, the Mavericks nabbed Wayne Ellington earlier this off-season, a guy who can stroke from downtown and, though not a lock-down defender, can hold his own on the other end.

But the thing about these players is you can never have too many. And that's why Jae Crowder becomes the most important player to watch during the summer league and the rest of the off-season -- he's capable of turning into just such a player.

First, let's address his shooting. Last year's 32% from beyond the arc was painful, but check out his shot chart, via NBA Stats: 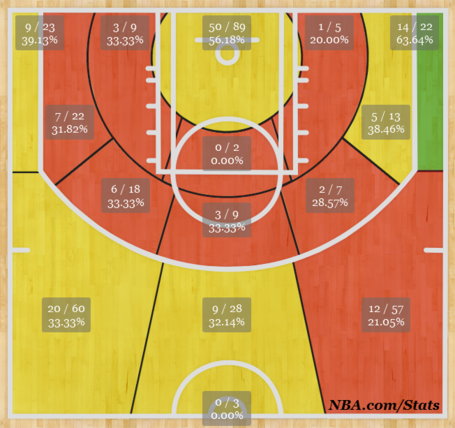 Despite shooting 28.8% "above the break", Crowder hit a very solid 23-45 (51.1%) from the corners. The Marquette product is on the right track, and while he will need to improve his efficiency, it's reasonable to think that Crowder could turn into an average (say, 36-37%) three point shooter next season -- especially if he's able to utilize the shot from the corner more often.

On the other hand, defense is an area Crowder already has a good handle on. Before we proceed, it's apt to realize that Crowder played about 18% of his total minutes (via 82games) at the PF in small ball lineups, and was horrible defensively while doing so. I know, it's shocking.

Playing the 4 isn't for him, clearly. But at 6'6" and 235 pound, Crowder fits the mold of a physical small forward quite well. Dallas was 1.07 points better defensively when he was on the floor and he held opposing SF to a PER of just 12.5 (as always, 15 is the average).

Crowder would match up with Kobe and Durant last season and did a pretty damn good job.

Hey! There's some defense! On a team that has seemed to have forsaken that side of the floor, Crowder's contributions to help stop opposing teams will be very important. Crowder would match up with Kobe and Durant at times last season and did a pretty damn good job for a rookie.

If you come away from this article expecting Jae Crowder to morph into Kawhi Leonard for 2013-14, you're going to be sorely disappointed. Crowder's rookie season left plenty of room for improvement, and it's up to him to make up the difference this off-season.

But with his drive and work ethic, I also wouldn't count him out. There's no way of telling just how much Crowder will be able to progress, compared to how much he will even be capable of advancing, and that's why he's the most important player to watch this offseason.