With the Mavericks in limbo in wait for Howard's decision, some reasons why the star free agent would fit in perfectly.

Share All sharing options for: NBA Free Agency: Why Dwight fits in Dallas

There's no telling where Dwight Howard ends up. Maybe it's Houston. Maybe it's back to the Lakers. Or maybe it's, somehow, Golden State.

Dallas has been but a footnote in the Dwight discussions, mainly because of the Mavericks tight-lipped stance when it comes to off-season moves. So while we wait for Dwight, here are some substantial numbers that actually prove why Dallas is a great fit, rather than just lip-service.

One of the biggest arguments made for the Mavs has been Dirk Nowitzki's ability to adapt to a second star. Dallas hasn't been shy about letting the league know that Dirk is ready for a second-fiddle role, more than willing to unload the title of franchise player to someone else. 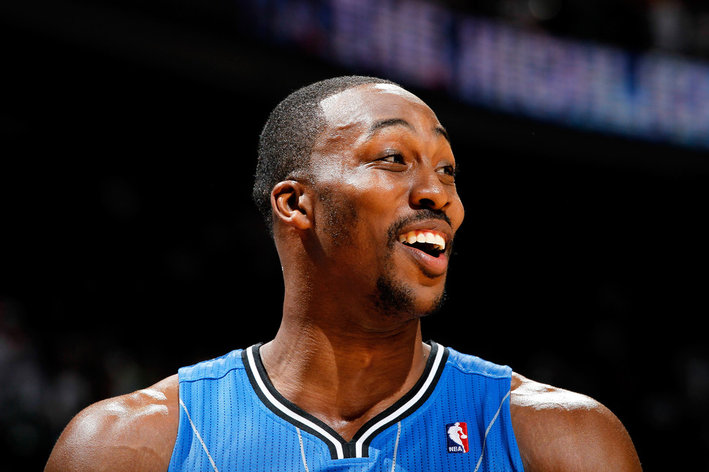 A scattered accounting of internal dialogue(s) on D-Day, 2013.

But Dirk has done more than just talk about that. He's showing it on the court. Take a look at Dirk's post-up to spot-up ratio in the last four seasons, per Synergy Sports. Note that these are plays with Dirk that end with a shot, free throw attempt or turnover:

A few caveats: Dirk's numbers were skewed a bit in 2012-2013 because of his injury. He wasn't the focal point of the offense because he wasn't fully recovered.

But the larger point of the data shows that Dirk has slowly but surely cut down on his post ups while relying more on spot up jumpers than ever before. He's also an insanely deadly spot-up shooter, something that Dwight SORELY missed last season in Los Angeles.

And if you want to point to the injury for skewing the numbers, then look at the championship season. Dirk was spotting up more than ever before. The reason? Because the Mavs ran a ton of Tyson Chandler pick and rolls in the middle of the floor, while Dirk camped in one of the corners. It was the missing piece of the Mavs offense from years past, with teams having to choose to either take away Chandler rolling to the basket and help off one of the greatest shooters of all time or stay glued to Dirk and let Chandler finish at the rim or at the free throw line.

Dwight can do that in Dallas. Now, there were some grumblings about him not just wanting to run pick and rolls, to be able to post up and take the bulk of the shots. Don't let the pundits fool you, because Dwight is more than capable of being an offensive centerpiece (you don't average over 20 points per game on crazy-high shooting percentages without having a good game around the basket.)

Look at Chris Kaman. Last year, the Mavericks center seemingly hijacked possessions with errant shot attempts. Was it by design, however? Kaman averaged 16.3 shot attempts per-36 minutes last season, the second most in his career! MAYBE THE MAVERICKS DID THAT TO SHOW DWIGHT THEY GIVE THEIR CENTERS THE BALL.

Joking aside, here's a real observation of the Mavericks changing their style to fit personnel...look at their pace from the last few seasons.

With the ground-bound core of Jason Kidd, Jason Terry and Dirk Nowitzki, the Mavericks almost never ran. (Don't mistake "not running" for "being bad in transition," however.) Their pace was always middle of the pack at best. But last season, Rick Carlisle said the Mavs needed to run with the younger legs on the roster (Darren Collison, O.J. Mayo, Jae Crowder, etc.) It's an inside joke among NBA fans that teams always talk about "pushing the tempo/pace/basketball" in the preseason and then never doing it. It's become a cliche buzz phrase to deflect any serious questions about strategy.

Carlisle was actually telling the truth though. In 2010-11, the Mavericks were a blistering 19th in pace. They were 16th the next year. But last year, when Carlisle made a vow to run more? The Mavericks jumped up to eighth pace. That's an 11-to-8 rank jump! And pace is a huge thing! It's basically the identity of your basketball team. To change that many spots in one season is incredibly drastic. So when the Mavericks tell Dwight that they'll give him post touches and style the team around his game, they can show these numbers to him as well.

As for the other teams that are making promises the change their style, how can Dwight possibly trust that to be true? The Mavericks at least can show him numerical evidence of their star and team changing their style of play.

Does Dwight really want to be on the Lakers again, with Kobe's 31.8 usage percentage last year? What about Harden's 29 percent, COMBINED with Jeremy Lin's 20.8. Dirk last season? His usage percentage was 24 percent. Just saying.

Again, Dwight could very well announce any team other than the Mavericks at any time. And there will be good reasons for that. But the Mavericks have surely done their homework. Don't count them out yet.