Dwight Gone, Calderon In: Where do the Mavs Stand?

Now that the Dwightmare is over, and the Mavs have agreed with Jose Calderon to sign him for 4 years, $29 million, what do the Mavericks have left in the tank?

Share All sharing options for: Dwight Gone, Calderon In: Where do the Mavs Stand?

The Dwightmare is over. Hug your wives and children, it's done.

And, in the wake, the Mavs have finally done something really smart with the free agency: they immediately signed Detroit point guard Jose Calderon. Calderon was pretty clearly the best point guard on the market behind CP3 with maybe the only exception being Jeff Teague. I, for one, am glad that they immediately boarded the Caldy train.

However, between the two major events -- not to mention the Bucks signing Mayo and DAL reserving the rights to Gal Mekel -- there's a question still to be answered. What do the Mavericks have left? How much money do they have? What spots do they need to fill? Is it enough?

Interestingly, the Mavericks had not formally committed to any salary clearing moves, like a Marion trade, before the Dwightmare as they were expected to. So, even after Dwight committed to the Rockets, the Mavericks still had about as much cap money as they did before he "spurned" us. Officially, since neither B. Wright nor Mayo had been renounced before the Dwight signing, that cap number still comes out to $13,052,958.

However, immediately after the Dwightmare, the Mavericks did renounce their rights to Mayo, and he signed with the Bucks. Dallas does, though, still have the Mini Bird Rights for Brandan Right, and thus, his cap hold.

Then, the Mavericks signed Calderon to a 4-year, $29 million dollar contract. It's unclear, at the moment, what exactly the specifics of that deal are. It's possible, as the Two Man Game's Brian Gutierrez has pointed out, that the contract is front loaded, so that the last two years don't hurt so bad, and are easier to stretch with the stretch provision. Meaning, that the early years might cost significantly more than the last years.

However, since we don't know the specifics yet, I'll assume that it's a 4-year deal at $7.25 million a year. That, plus the roster charge that signing Caldy gets rid of, would give the Mavs $10,136,778 in cap space for the rest of the offseason.

The good news is, the deal with Gal Mekel doesn't infringe on the cap space at all. The deal at the moment is entirely verbal, and since he's going to be signed to the veteran minimum, he can be signed once Dallas has already spent up to the cap.

The big spots the Mavericks still need to fill right now are Center and 2 Guard: between Mekel, Larkin, and Calderon, PG is pretty much nailed down. Wing/PF has always been strong for the Mavs, and even if Marion is traded, there's still Crowder to play SF and stretch four. As well, Vince spent a lot of time at the wing last season. But, other than the newly drafted Ricky Ledo, there's no one to play SG and there are absolutely no Centers on the books right now.

The first, and most obvious, move to make is to re-sign Brandan Wright. Wright may not be -- and probably shouldn't be -- the starting Center that the Mavs want, but he already has a cap hold for about $884,00 and as far as I can tell no one else is particularly courting him. However, as we've discussed several times now, Wright is incredible in limited minutes, with a true shooting percentage well into the 60's, a PER over 20, and a touch from the Dead Zone that confuses even the best NBA defenses. To get him on the cheap would be a huge steal, and with part of his contract already on the books, it wouldn't hurt too badly either.

After all, remember that not three months ago we Mavs fans were saying that Wright could easily pull $10 million on the market. If his name isn't getting tossed around right now and the Mavs got him for $3-$5 million a year? That'd be a big deal.

So, best case scenario says that Wright doesn't draw too much interest and the Mavs sign him after they're over the cap, so that's one Center on the books.

Who does Dallas get for Starting SG, presuming that they'll pick up Ledo? Starting Center? Those two positions are all that they desperately need with the rest of the roster as it is. 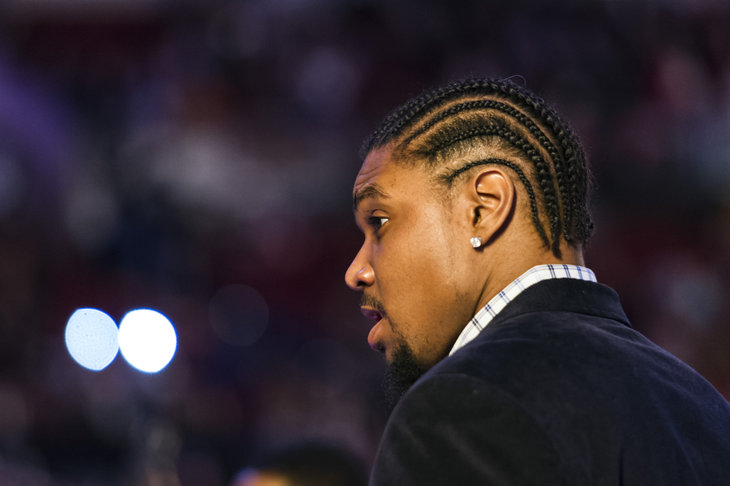 News on Mavs' Interest in Bynum

So let's say that the Mavericks have an interest in Bynum. Signing him, realistically, would at the very least cost the Mavericks the rest of that $10 Million in cap space. Probably a little more, actually; it might even necessitate a sign-and-trade with Marion (though, if it does, there had damn well be some cap space left over after, if you ask me).

Picking up Bynum would most likely only leave the mini Mid-Level Exception ($2.652 million) and veteran minimum contracts left with which to sign the SG and any last deep-bench pieces. And that's not necessarily terrible. After all, Anthony Morrow could very realistically be signed with that MLE, and for the rest of the bench pieces, veteran minimums are really all you'd need anyway.

That said, that team I just described, Calderon-Larkin-Morrow-Ledo-Dirk-Crowder-Vince-Wright-Bynum-Maybe Marion is a defensive disaster. It's really, really bad. Last season, the Mavericks were actually a pretty good offensive team. Top 10 once Dirk was healthy. But they were a defensive horror show, and that potential squad above is just as bad, if not a little worse.

What the Mavs need now, as the roster stands with Caldy-Marion-Vince-Dirk-Larkin-Ledo-Crowder-and Maybe Wright, is defense and some more three-point shooting. Maybe I'm being presumptuous, but I really think that's all the Mavs need.

This is his shot chart from last season in Toronto and Detroit. It's BEAUTIFUL: 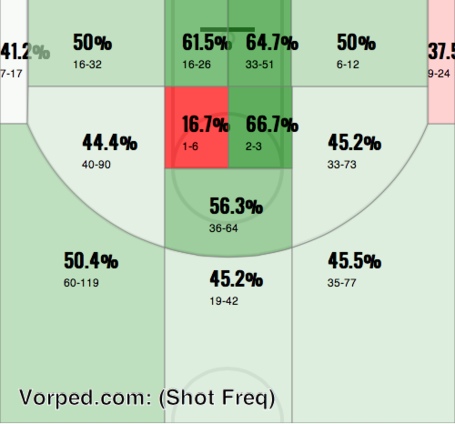 Similarly, Caldy is one of the best passers/ball handler of the last 6 years: he's been in the top four players in Assist/TO ratio for the last 6 years in a row, including second best three times, and #1 once.

Calderon is a one man floor spacing machine, as is Dirk, but since Dirk likes to camp out in the midrange and Marion/Crowder/Center can't shoot, just one more really good three point shooter is all the Mavs need to be able to draw defenses to wherever Dallas wants the defense to go. One more three point shooter is the difference between Caldy-Shooter-Vince-Dirk-Center lineups and Caldy-Vince-Crowder-Dirk-Center lineups.

But, again, these lineups are all defensive disasters, so for any of this to work, that shooter needs to also be a really good defender, just as well as the Center needs to be defensively sound.

More: What Jose Calderon Brings to the Mavericks

So: who do they pick up with $10 million and Marion as a trade chip to fill those two holes?

Money-wise, the most efficient way to do this would be to pick up one of these major pieces, either the Center or the SG, in a trade for Marion. That would leave the Mavericks with the full $10 million left in space. Maybe they trade Marion for Asik, as they're hoping to. Maybe they sign-and-trade Marion for AK47 on the cheap, fill in the two spot with an Anthony Morrow type, and then do just YOLO and sign Bynum or Oden outright.

Maybe the Mavs just use the $10 million to sign Carlos Delfino and Elton Brand and Samuel Dalembert all outright. As lacking as it might seem, a Caldy-Delfino-Marion-Dirk-Brand lineup would be pretty damn efficient.

It's hard (or, you know, impossible) to know where exactly the Mavericks will go from here, but it is clear where they stand. They have $10,136,778 in straight cash. They have Bird Rights for Brandan Wright that can be exercised when all is said and done. They have Marion's expiring contract to deal. They have the $2.652 million Mini MLE, and they only need two more pieces.

The question remains: how do they do it?

The Mavericks have apparently agreed upon a 3 year, $9 million dollar deal with former Maverick Devin Harris. Accounting for the roster charge that Devin Harris now supplants, that gives the Mavericks $7,626,958 in cap space left.

The Harris signing does a really good job of providing some more perimeter defense (presuming they keep a defensive oriented SF) and a little flexibility. They may still want a morrow type player to fill out the wing, however, with the mini MLE, and they definitely still need lots more in the big man department.

It's possible that now, with more ball handling in the bag and only $7.6 mil left, the Mavericks are looking to shop a package of Larkin and Marion for one big and use the rest of the money for the last big man. It's also possible that they'll use the money to sign to budget defensive bigs, Brand, Dalembert, or (god forbid) Jermaine O'Neal Style.

The good news is, Harris plays two-guard often and fills a lot of Dallas' holes, and there's still a lot of flexibility for finishing the roster, though the holes are, in fact, closing fast.