Why I am Super Duper, Unbelievably, Incredibly Giddy About Devin Harris

I am very, very happy about the Devin Harris pickup. Why? Read on!

Share All sharing options for: Why I am Super Duper, Unbelievably, Incredibly Giddy About Devin Harris

As I'm sitting down to write about why I think the Devin Harris pickup is so freaking fantastic, I'm incredibly tempted to just write:

LOVE THE HARRIS SIGNING SO MUCH (sorry I'm late guys).

Instead, I'll try and give you a real, honest basketball-reasons defense for why I think this is a brilliant signing.

The question of need is obviously essential. As I discussed in the summary of the Mavericks' free agency situation up to now, the Mavericks needs were clear: solid defense and 3-Point shooting at the starter SG position and a strong, defensive Center.

Devin Harris addresses the SG need brilliantly. I know, he's not a great 3-point shooter. But he works anyway. Let me prove it.

It's pretty clear that Harris has been signed to start at SG, while spending some time as the primary ball handler so that Calderon doesn't need to exceed 29 minutes or so. The argument I'm making, essentially, is that Harris was a better choice to fill the SG spot than any other option on the market, because, certainly, Harris isn't anywhere near perfect. But he's better than anyone else might have been, by the time they chose to pick him up.

So, really, who was Harris' best competition for the spot? I did a poll on Twitter and got a lot of votes for Nick Young, Gary Neal, Corey Brewer, and especially Monta Ellis. From the other writers, I heard hints of Wayne Ellington, Ronnie Brewer (though it was acknowledged that he is broken), Anthony Morrow, and Daequan Cook. From EVERYONE, I heard Gerald Henderson. I'll get back to those guys.

First, the spacing and the defensive prowess that the two-guard needs to provide are roughly equally important to the Mavs' success. 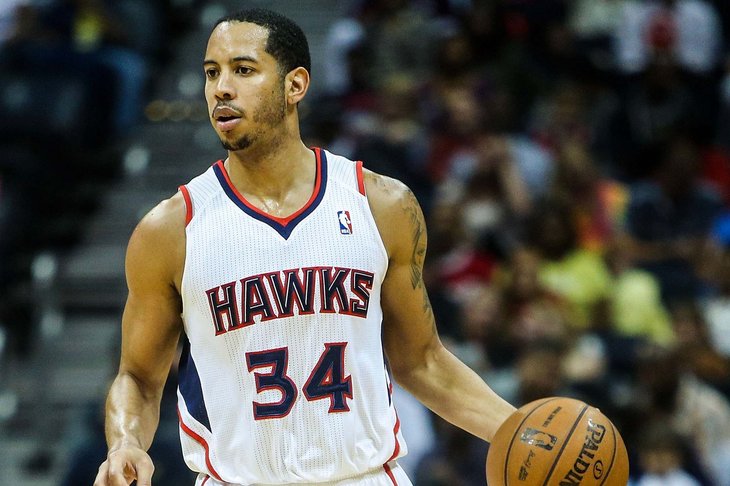 Offensively, right now, Calderon and Dirk and Vince off the bench are really the only major offensive threats (though they're also basically the only players). But Marion, Crowder, Larkin, and Harris himself could all be really valuable offensive weapons so long as they have enough room inside and around pick and rolls to work. Dirk and Calderon will create a ton of space just in and of themselves, but they need one more shooter to create the requisite space. Someone who can camp out in the corner with Dirk on the elbow and Jose at the wing, so that the defense in the paint cannot collapse. It's the difference between having a stagnant offense with a few sets, and having a whole wealth of options.

On the defensive end, having the defensive oriented two-guard is the difference between being horrific/mediocre or average/above average. With a blegh defender to pair with Calderon, the Mavs backcourt would consist of two really bad defenders and just Marion (or slightly worse, Crowder) to have to clean up the mess.

The frontcourt who would be trying to mitigate this disaster would be, barring a miracle than lands Omer Asik, Dirk and an aging defense-first guy.

Marion and Samuel Dalembert cannot defend for the Mavericks alone.

With a defensive SG, things begin to look much more positive.

The backcourt would be more full of defensive prowess than devoid of it. With two players who can defend (and with another on the bench in Crowder), for every switch or hedge that Marion/Crowder needs to make, the new guard could pick up most of the slack. As a result, it becomes much easier to do things like hide Calderon on the weak offensive player.

Similarly, having some old Center as only one defensive member of the frontcourt becomes significantly more tenable, since that guy would have to spend significantly less time compensating for the perimeter's mistakes.

Now, who out of the aforementioned list of players brings high value to both of those needs? Nick Young, Gary Neal, and ESPECIALLY Monta Ellis are terrible defenders. None of them can keep in front of their guy for anything. All have the tendency to get blown by, and in doing so, give up even trying to recover on the play. Monta can't even shoot the 3 well, based off of his 31% career number. Neal and Young are good shooters, but both have terrible shot selection, and so probably wouldn't even create the necessary space.

Ellington, Morrow, Cook, and Brewer are all better fits, in that they do one of the jobs very well, and aren't bad at the other, but none of them do both well. Cook and Morrow are both outstanding three-point shooters, and Ellington is pretty great himself. However, neither Ellington nor Morrow have had a season where they defended better than 109 points allowed per 100 possessions defensively, 4 worse than average, and Cook at his defensive best tied Harris at his average. Brewer has a serious gambling problem when he plays defense, but more problematically, he shoots less than 30% from 3.

Gerald Henderson indeed might have been awesome, but he's a restricted free agent and probably Charlotte's best player so it's not like he was gonna go anywhere anyway.

Devin Harris, comparatively, is not great, but is pretty goddamn solid at all the things the Mavs need him to be good at. I like to think of Harris as the kind of player who has way more impact than it ever looks like he's having.

Reaction: Why Harris is Back in Dallas 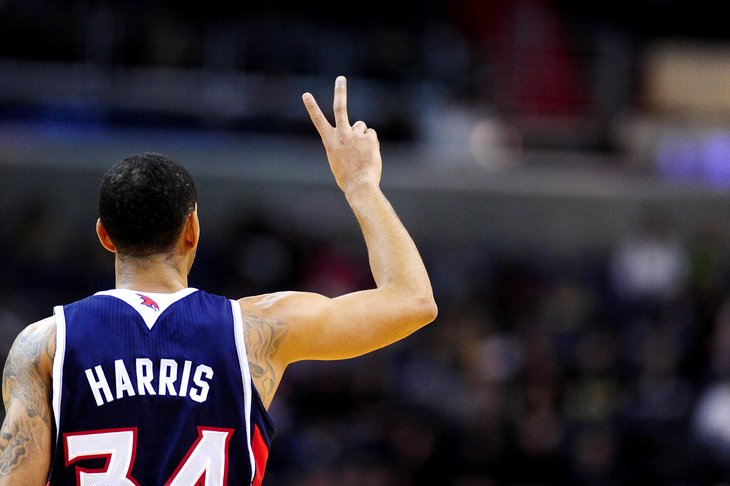 Here's my favorite stat regarding Harris' defense: he spent the entire first round of the playoffs guarding Paul Freaking George, and averaging more minutes per game than anyone else just to guard him, and he still, somehow, had the third best +/- of anyone who logged more than five minutes a game, behind only Kyle Korver and Josh Smith.

Remember, too, that the Hawks lost. So, everyone should have had a really bad +/- by default, especially the guy guarding Paul George who played 37 minutes per game. Harris' -3.3 (only!?) is amazing, to me.

Last season, by efficiency, Harris had an average season, only 105 points allowed per 100 possessions (though it's probably worth noting that that's still better than any of the suggested alternatives). However, he held opposing players to a paltry 13 PER, and with Harris on the court, the Hawks only allowed 101 points per possession to their 107 with him off the court, per NBA.com.

It's also probably worth noting that previously with Dallas, Harris only had one season where he logged less than 104 points allowed per 100 possessions.

A very valid concern, however, may be with his defense prior to last year with Atlanta, and after his years with Dallas, during his long stint as primary ball-handler and pseudo-star for the Nets. While the concern certainly makes sense, I'd argue that his role when he was with Dallas before -- but especially his role in Atlanta last season -- is much more like what his role will be like this coming season, and so those numbers are likely to be more consistent.

But then comes his shooting. No, he is not a deadeye shooter in the vein of Cook, Morrow, or Ellington. What he can do, however, is create space the way the Mavericks need it to be made.

He's a 32% career 3-point shooter. That does not inspire confidence. What should be more encouraging, though, is that two years ago he shot 36% on 3.4 3's attempted per game. Last year? 34% on closer to 4 shots per game. Those numbers aren't great, but they're good enough, because Harris is smart.

Really quickly: the expected value of a shot is a number that says how many points that taking the shot is likely to add to your team, and it's calculated by simply multiplying the FG% by the amount of points you'll get from it. So, in his record year, a free throw from Jose Calderon would have netted an expected value of .98 points, for example.

Recently, someone did the math and discovered that a three-point shot with only a 28% likelihood of going in is still more valuable than the average two-pointer. Let that sink in for a moment.

I think, on principle, that someone shooting less than 33% from 3 is probably wasting his time by taking a 3, but as long as someone like Devin Harris chooses his shots intelligently, having him stretch the floor and shoot threes is NOT A BAD IDEA. And if he's taking 4 of them a game, and if they still add more value to the Mavericks than another shot, then defenses have to account for a three-point shooting Devin Harris.

The key, in this case, is making sure that Harris doesn't take dumb YOLO 3's; if he does that, the percentage on his shots drops and there's no longer a need for defenses to actually defend the shot, and the entire principle is moot. But this shot chart for Harris is telling on that point: 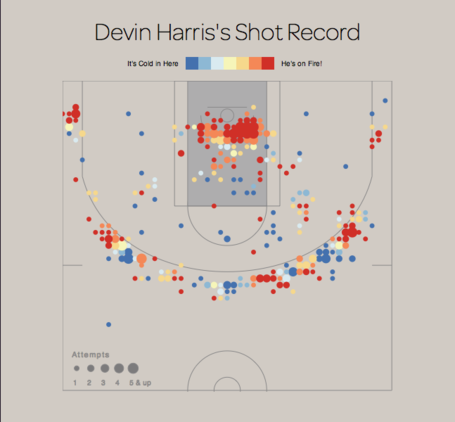 Notice where Harris is hot, and then where he's cold, and how much he takes of each. I can only find one space, on the right wing, where he takes more bad shots than he does good ones. Look at the left corner: he actually shoots almost 50% from there (remember what I said about needing a corner shooter earlier? So yeah, Harris can do that). Notice the blue spot on the left wing? I actually find that encouraging, because it's so close to his hotspot in that area. He knows where his shots are strong.

But, most importantly, look at the relative lack of long two-pointers. That is exactly what you look for in a smart shooter, and it's the kind of decision making that creates space in and of itself.

In that way, Harris' three point shooting is much less of a detriment to Dallas' needs than someone else's poor defense.

Watch here, too. He takes one awkward off-dribble 3, but you might notice the 4.5 seconds left in the shot clock when he releases. Otherwise, he makes 4 3s in this game, and 3 of them are wide open spot ups.

Devin Harris is such a great signing because as long as he continues to defend and shoot intelligently, then he fixes Dallas' deficiencies in a way that no other player on the market could, and he does it on a contract that still leaves a lot of flexibility for the rest of free agency. Then, on top of all of that, he plays a position that allows for Larkin to be considered in potential trade deals (a positive for me, if it lands someone like Asik) which opens up a world of possibilities to round out the team for these next fews weeks.

Welcome back Devin. It's about time.