The Good News and Bad News: Thinking About the Mavericks' Young Prospects

If we're putting our future in Brandan Wright and Jae Crowder's hands (God help us), how good do they actually end up being? I try and figure it out!

Share All sharing options for: The Good News and Bad News: Thinking About the Mavericks' Young Prospects

Somewhere past the middle of last season, I tried some math to see how good all the young Mavericks (OJAM, Collison, Jae, B.Wright) would likely end up being at their peak. What I did ended up being vaguely interesting, but limited, and I couldn't run the numbers for Crowder or Wright due to sample size issues.

Recently, I figured out a way to do a similar thing for both Crowder and Wright, and it seems to have worked about as well as predictive stats crunching like this can.

Distributing the Future: Does the Mavs' Young Talent Improve? 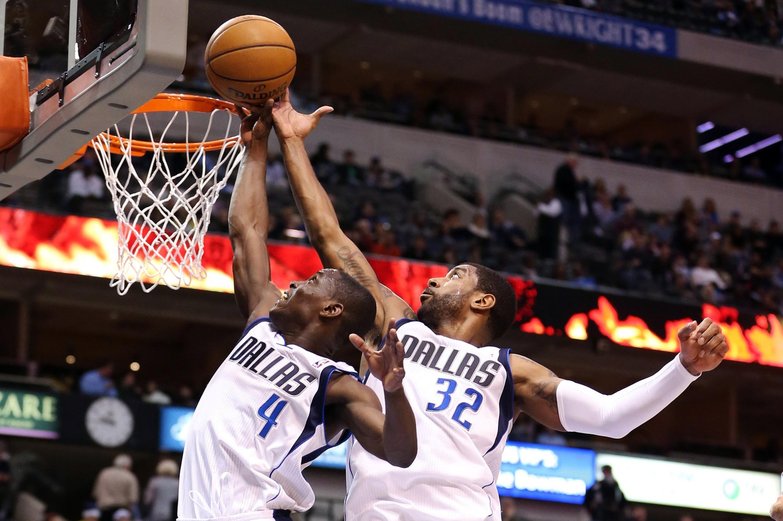 The Way it Works

What I realized, is that just looking at a player's PER and then saying "well, he's had PERs of 16, 14, 15, 21, and 22, so if I punch those numbers into a calculator I'll get a vaguely applicable graph/equation" ends up being difficult because we have no idea when that player will actually peak.

So, for all we know, the calculator will just spit out an equation that increases until Brandan Wright has a PER of 35 in his 13th year in the league. As wonderful as that would be, I think we can all agree that it's wildly unlikely.

According to some wonderful basketball statisticians on Basketball Reference's blog, the average basketball player actually peaks at the age of 27 with a standard deviation of 3.6. Meaning that 2/3 of players peak between the ages 24 ½ to 30 ½.

Age is obviously not the only factor in peak performance, though; experience and context play a huge role. Some players just peak when they move to a team that fits them better, or after getting over injury troubles, or after getting more playing time. Others come into the league either late or early and just learn as they play more and more.

Context is impossible to predict mathematically, in this case, so I'm assuming that it'll be accounted for in the error, and at any rate, it'll show up again later, I promise.

Regarding experience, though, after combing Basketball Reference for all players who played more than ten seasons, I found that most players actually peaked after 5.8 seasons in the league with a standard deviation of 2.2 (meaning that 2/3 of players peak between the 3.6 years in the league and 7 years).

What I did, then, using the average peak age and experience data, is I plugged the players' growth1 from one year to another, along with the probable peak season, into my calculator to get a basic equation describing the players' growth. Using that equation, I could then do just a little bit of calculus to get a projected career performance arc.

I did this for PER, Net Efficiency in Points per 100 Posessions (Points scored per 100 possessions minus Points allowed per 100 possessions), and Win Shares per 48 minutes. I used those three because they're all "comprehensive" metrics to tell us how good a player is, but they all tell us slightly different things.

PER tries to tell us how good a player is, objectively, but is still remarkably bad at accounting for defense. As well, because PER doesn't really take minutes into account, it's bad at telling us the impact a player has on a team. Net Efficiency, on the other hand, does tell us about defense and impact, but since it's basically just an upgraded +/- system, it does a very poor job of telling us just how good the player is, isolated on his own merits. Win Shares is a nice mix of the two, really.

To test that this would, in fact, work, I tried it on a player who's already retired: the Mavericks' own Mark Aguirre. He was a particularly good case for this, since he peaked at right around the average point in both age and experience. As well, he spent most of his time on one team and without major injury, which helps reduce context error. I only used Aguirre's stats from his first 4 seasons (one less than B Wright has played). Then, I compared my projection to his actual career stats.

Here are the projections for all three metrics, compared to his real stats in all of those categories: 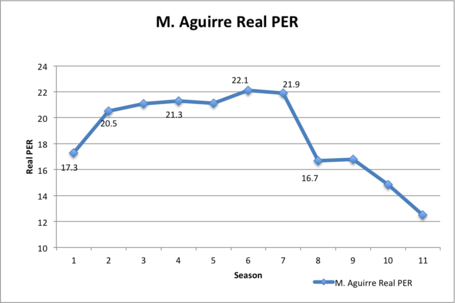 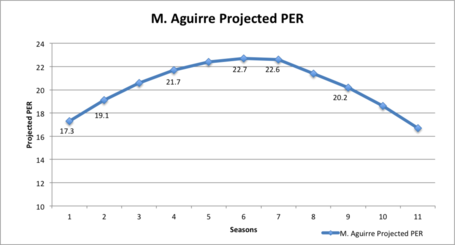 This one worked pretty well, I think: notice that it projects his peak PER and how long he maintains that peak to within .6. It doesn't predict the sharp drop-off in Aguirre's 8th season, but at least it predicts the downslide starting in that season. 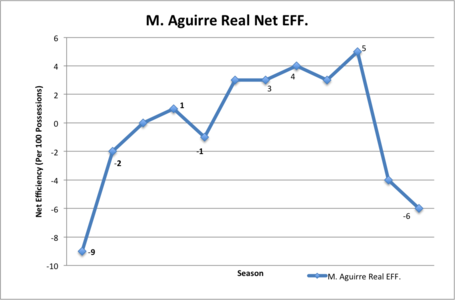 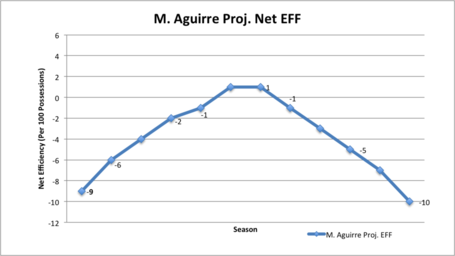 This one seemed to be the least helpful of the group, I think, but it still has some real value. Aguirre's actual net efficiency only peaked at 5, which is really a mediocre team impact. 20+ would be the typical superstar impact. So, in the spectrum of efficiencies, the projected peak does actually a decent job of letting us know that he was both in the negative in impact for awhile, and that even at his peak, efficiency wasn't his strong point. Efficiency in general is hardest to project for, because it's the most context dependent out of these stats. 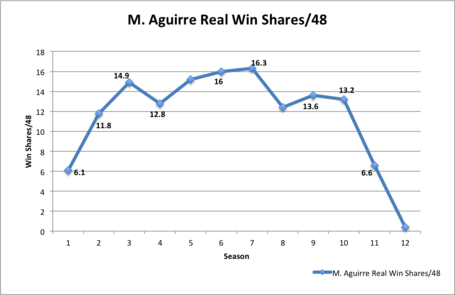 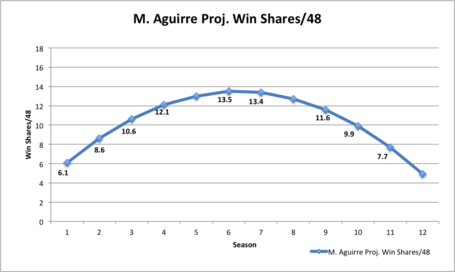 It's flawed, but it has some pretty darn good value as a predictor of peak production.

Wright is an example of the kind of guy whose production has been influenced by context. Between his major injury and moving from Golden State to Dallas, there was a massive increase in his production from his 3rd to his 4th season, and the kind of dip-to-leap in production that he had before Dallas is really hard to replicate in stuff like this.

The long and short of that is, despite how much I want to not believe it, his numbers are going to be a little high on the projections.

Here were B Wright's projection graphs, with comparisons to his first 5 seasons included. 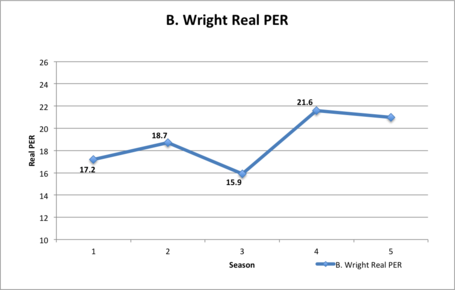 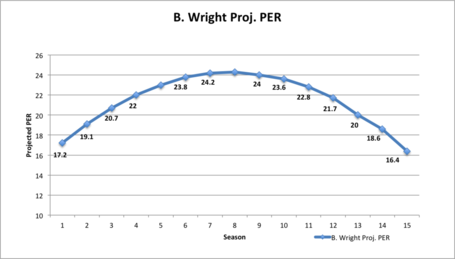 Wait. He's projecting a PER over 24 for the next 5 seasons? Yesyesyes. 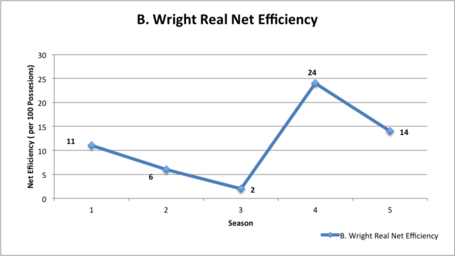 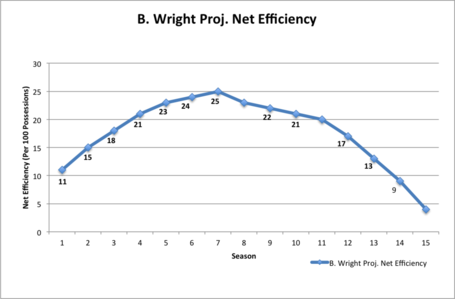 Holy shit, he peaks at 25 more points scored than allowed per 100 possessions?! So this one is clearly pretty excessively optimistic, but still super fun to look at! Go Brandan Wright! 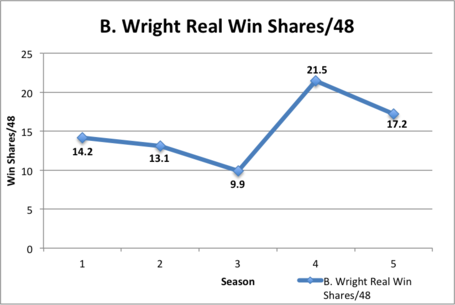 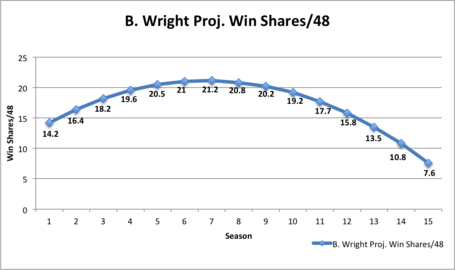 This looks really good. I like this. Fairly reasonable, pretty accurate, and really encouraging.

So all of these numbers are incredibly encouraging. Maintaining a PER of 24 or above for the next 5 seasons seems just a little farfetched to me, but not excessively so. If he keeps up his performance from the last two seasons with extended minutes, it doesn't seem wildly unreasonable to think he might do it once or twice.

The efficiency projection, though, in particular, is a little extreme. 25 more points scored than allowed per 100 possessions are Jordan-esque numbers (though, of all of Jordan's feats, that's by far the most doable). The 24 net efficiency mark that Wright put up two seasons ago is enormous, but he only played 800ish minutes that season. His defensive efficiency per 100 possessions is better than he gets credit for, but he still isn't enough of a defensive stalwart to put up those numbers consistently. The 14 net efficiency he ended up with last season is a much more reasonable mark.

If nothing else, the Net Efficiency graph is a reminder that these type of calculations can, in fact, be pretty flawed. Otherwise, it's just another case for giving Wright way more playing time, as long as you don't expect him to actually put up numbers that are that crazy.

The Win Shares graph, I think, is actually the most encouraging of the set, and also happens to be the most reliable. 20+ per 48 minutes is easily an All-Star number. As our own Alan Smithee mentioned in an email chain, Win Shares is really the stat to look for with Wright going forward. We know he can personally blister in the short stretches he's played for, but how much is he really likely to impact the team long term?

The answer to that isn't readily apparent, here, since a change in Wright's role might change the projection too, but nonetheless, it's really encouraging, especially since the Win Shares projection chart here has the highest correlation, and seems to be the most reasonable going forward.

All of this is encouraging, in fact. The numbers are all a little high, probably, but even if you drop them a notch or two they're really, really good. Wright is projecting to be a franchise staple one way or another, given more minutes. Even if he doesn't play up to quite these standards, that's really good news.

Unfortunately, Jae Crowder's numbers were not quite so encouraging. Since he only has one year of experience in the league, I couldn't project for PER or do real life comparison graphs, but I could get Efficiency and Win Shares projections.2 Here's his data: 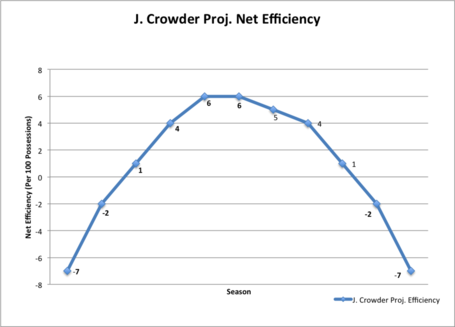 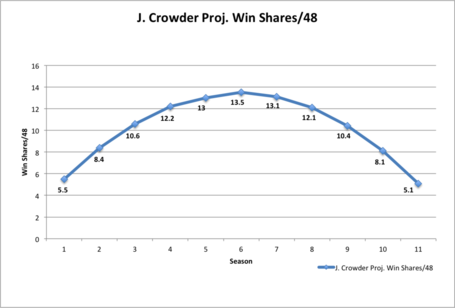 Jae's stats aren't really bad per se. I don't think they're particularly optimistic, unlike Wright's. I don't think Jae's ever likely to ever be a crazy-talented player, but he is growing at a pretty surprising rate if you look at his production at the end of last season as opposed to at the beginning.

At the end of last season, Crowder wasn't good by any means (he finished with a PER around 10, in case you were curious). He was, however, useful to the team in the last two months, as measured by +/- and Efficiency. He spaced the floor - to the extent that defenses worried about 3's, and less to the extent that he made 3's - and he defended, both of which helped a lot.

His data shows more or less the same trend continuing on for his career. He peaks at 6 more points scored than allowed, and we can be glad that, at least, that number is positive. His peak of 13 win shares per 48 isn't going to shock anyone, but it's over 10.

According to this, Crowder will probably grow into a slightly better, more niched version of the same role-player he was in his rookie year.

If you wanted Jae to be a real asset, these numbers are disappointing: they essentially tell us that Crowder will never be a particularly great player, but he'll be useful, sometimes, in stretches.

That's not really awful news, but it's just not that hopeful.

I have absolutely no idea why Crowder has been getting significantly more playing time than Brandan Wright, and Rick Carlisle should probably be ashamed about it.

1) I had to do growth, because it was the only way to easily establish their peak season, otherwise it would have been a mess. The idea was that, if Wright had a PER of 15 in his rookie season and 17 in his next season, the first point on the growth equation would be "2." Occasionally, the growth equation wouldn't have given me the right final shape on the projection -- as in, the arc would have been upside down, though otherwise totally valid -- so I had to move it a bit. In those cases, I made the slope of the equation negative and then moved up the line, so that, in the end, the player still peaked at the right time.

2) NBA.com has a great per-month breakdown of Efficiency and Win Shares stats, so I could still get plenty of data to project for, where PER is only accessible annually (at least, without Synergy). After I got my initial growth equation, I did have to translate the graph a little so it gave me data in terms of years, not months. Also, for the data sample reasons, Crowder's graph is probably a little less reliable than the others, but the results look reasonable to me, to be honest. That's probably a bad measure of success, but we just can't say for sure with Jae one way or another until he's been in the league a little longer.