Positional Strength: Breaking Down the Centers

The Mavs are not in the best position here.

Share All sharing options for: Positional Strength: Breaking Down the Centers

In the previous editions of "Positional Strength," we've seen that the Mavericks are doing surprisingly well for themselves at a lot of positions: 7th in the West at PG, 6th at SG, and 4th at PF. That's not bad; "playoff qualifying" at almost every position -- though we're probably a little biased.

Then, there's Center. When Brandan Wright is playing Center, the Mavericks will score a lot. Otherwise, the Center position is just going to be a shitstorm. It's really that simple. The Mavericks are not good at the 5.

As we've pointed out on this fine website a number of times, Brandan Wright has been incredibly good in the stretches that he's played for the Mavericks.

If you somehow still don't believe us at this point, I'll let these numbers speak for themselves:

Per 36 minutes last season, Wright registered 17 points and 8 rebounds on 59.8% shooting. Per Basektball Reference, he had a PER of 21 and an elite personal score of 119 points per 100 possessions.

The concerns with Wright are, of course, that he only played 18 minutes per game last season on 64 games, and it's hard to know whether or not his numbers will translate to starters minutes. Taken out of the "only playing with high-octane-offense" contexts, Wright's utility will likely take a small dive. 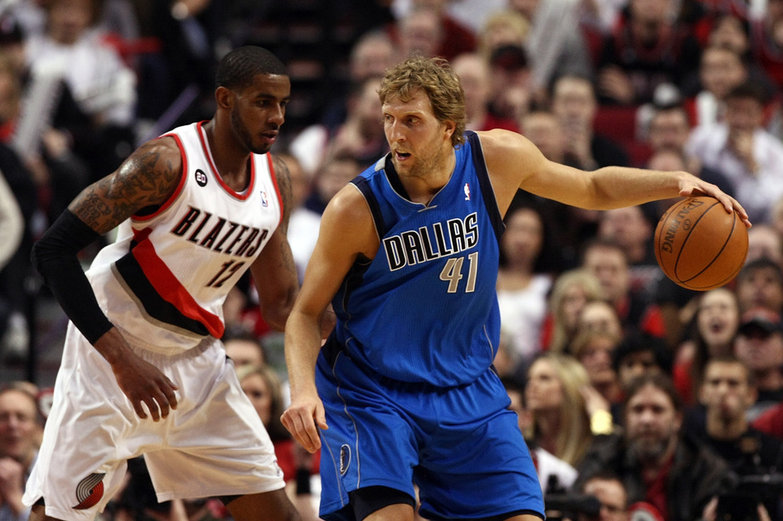 Wright's defense, too, has been slightly problematic. His numbers are better than people give him credit for, but it's true that his placement on defense is just not what it should be to be a good rim protector. It likely won't matter too much: when he's on the court the Mavericks will score enough to render their not-that-good defense irrelevant.

If Wright is seeing starter's minutes, the Mavs will score like it's 2006 again. They also will defend atrociously, and that's not promising.

The backups don't offer much encouragement: Samuel Dalembert has some pretty good numbers from last year, but other than a stretch of 16 games starting for Milwaukee, he hard a hard time getting off the bench at all. In fact, he hasn't put up good numbers in significant minutes since 09-10.

Then there's Dejaun Blair, the talented backup C from the Spurs who eventually got buried on the bench in even Popovich's trusting rotation. That does not bode well for Blair in Dallas.

Expect to be really frustrated by the Center rotation, unless Wright has a truly breakout season.

1) Memphis Grizzlies: Barring Dwight Howard starting this season like it's 2010 again, the Grizzlies have the best center in the league in Marc Gasol. Gasol is, at the moment, a savant from the Center position, both defensively and offensively. He won Defensive Player of the Year last year, and though he's not a consummate scorer, he passes at a rate approaching many point guards. I would argue that the Grizzlies have one of the best benches, too, with the shocking underrated Kosta Koufos and Zach Randolph ready to spend time at the 5.

2) Houston Rockets: If Dwight Howard comes back at full strength, they easily top this list. Even if he doesn't, though, the Rockets could easily make a push for the number 1 spot: even injured and a shell of his former self, Dwight was very, very good last year; still a top-5 center. Add in the fact that Omer Asik, breakout micro-star, is their bench go-to, and the Rockets will be scary from the 5.

3) San Antonio Spurs: Tiago Splitter is fine, probably more mediocre than anything, but the Spurs get up so high on the coattails of Tim Duncan. Duncan actually spent more time at Center than at PF last year, per 82games.com, and as long as Duncan is playing Center, the Spurs are going to be in the top 5 of any list, plain and simple.

4) Minnesota Timberwolves: Nikola Pekovic just got a huge contract from the Timberwolves for the next 4 years, and not just because he's a terrifying Montenegrin man that Flip Saunders is probably a little afraid of: Pekovic is very, very good. He's had some issues on his pick and roll defense, though his post defense is very good. Add in the fact that Kevin Love is likely to spend time at Center, and these guys are probably doing just fine.

5) Golden State Warriors: Andrew Bogut is an incredible defender when healthy, and from a few reports, he's really happy and excited about his health going into next season, which should scare a lot of teams. Having the Warriors play 4-out with Bogut in the middle was absolutely deadly in the playoffs last year. With a fully healthy Bogut? Look out. Jermaine O'Neal might be a surprisingly decent backup, but not more than that.

6) LA Lakers: With Dwight out of town, Pau is likely to see more time at Center again, which should be the one bit of good news Lakers fans have heard for the offseason. Pau has never been as effective from the perimeter as he is in the paint, but when he is in the paint, he's deadly. It's never a good idea to sleep on this future hall-of-famer.

7) Sacramento Kings: There's a lot of debate as to the actual effectiveness and input of DeMarcus "Boogie" Cousins, and I think an argument could be made to put the Kings both higher or lower on this list. Nonetheless, despite his defensive problems and his poor decision making, Cousins can be a best-in-the-league threat at the height of his potential. We still have to see him commit to that potential, though.

8) New Orleans Pelicans: With the trade that sent Robin Lopez to Portland, the Pelicans are betting on Anthony Davis working out for them at Center. Consensus seems to believe that Davis is looking at a breakout year next season, and even if Center isn't his best fit, he should be outstanding nonetheless.

9) Portland Trail Blazers: Robin Lopez is a solid defender and rebounder, but the real reason that I put the Blazers so high is LaMarcus Aldridge. Per 82games.com, Aldridge spent almost as much time at the 5 as he did at the 4, but the numbers for LaMarcus at Center are astounding. From the Center position, Aldridge recorded an absurd 27 PER with a sky high efficiency. That is a scary thing to look out for.

10) LA Clippers: The Clips and Mavs are probably exchangeable, but my premise is that DeAndre Jordan was actually surprisingly good last season. He was the second most efficient center in the league, per Basketball reference, and in the top 5 in both defensive and offensive rebounding. He's improved by a wide margin as a defender, and if he can continue his improvement, can be an incredible asset.

11) Dallas Mavericks: Brandan Wright rocks, but has his warts, and it's unclear whether he'll actually be as good in real minutes as we want him to be. I had a hard time justifying putting the Mavs too much higher than this.

12) Denver Nuggets: I'm basically ranking the Nuggets here under the premise that Brandan Wright is better than Javale McGee. McGee has some really obvious flaws -- but like Wright -- McGee had a surprisingly good year last year (top 5 rebounder, top 4 offensive rebounder, top 5 scoring efficiency). Timofey Mozgov is their next best bench option, though, and there's no way to know whether the McGee experiment will work out.

13) Phoenix Suns: Marcin Gortat has been a shell of his former self for the last while, and he looked even worse in EuroBasket this month than he did last season. The bench for the Suns is nonexistent, and it's hard to feel good for this team in the slightest.

14) Utah Jazz: Enes Kanter is going to be very, very good. He might even be that good next season. He's still developing, though, and he has no backup. It's hard to know whether he's ready for that starter role.

15) Oklahoma City Thunder: Kendrick Perkins actually had negative win shares for the playoffs last season. Meaning the Thunder would have been better with a four person squad then playing with Perkins. Nick Collison is probably worth a higher ranking than this, but Perkins is probably the only genuinely bad player on this list, and so they get last place.