Dirk Nowitzki is traveling back in time...or being cryogenically frozen

Dirk posted a picture on Twitter earlier this week. It was strange. Let's get down to the bottom of this.

Share All sharing options for: Dirk Nowitzki is traveling back in time...or being cryogenically frozen

So this happened today... #timemachine pic.twitter.com/vJie04yQ2U

IS DIRK TRAVELING THROUGH TIME?

This is the most obvious reaction, as Dirk says so himself. A time-traveling Dirk isn't uncharted territory. Just ask Andrew. 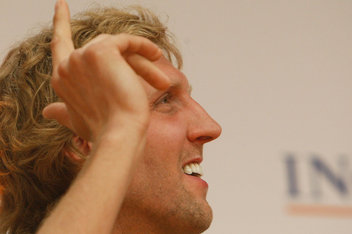 In this Fan Fiction Friday installment, Dirk awakes to a new life.

If Dirk is indeed time-traveling, where is he going? Is it indeed to the 14th Century so peasants can marvel at his size and skill? Does Dirk even have a say in where he's going? Maybe he's going back in time for basketball related reasons. Maybe he's going back to the Summer of 2004 and telling Mark Cuban to match whatever the Suns offer Steve Nash.

Maybe he's going back to May 2003 and warning his 2003-self to not go up for a rebound against Manu Ginobili, when he injured his knee in Game 3 and missed the rest of the Western Conference Finals against the Spurs. Maybe he'll also go punch Steve Kerr hard in the face before Game 6 of that series.

I feel like if Dirk could travel back in time though, he wouldn't do it to affect his career. He'd probably go back to the early 90s and catch a grunge rock show in Seattle, or something low-key like. Maybe play a handball game in Germany back in his hometown.

IS DIRK BEING FROZEN FOR THE FUTURE?

Hey...has anyone seen Dirk since this picture was posted? Maybe Cuban's freezing him until the Mavs finally sign that big-time free agent.

PLEASE. I DON'T ASK FOR MUCH YOU GUYS.

I'm sure this is just some cool, Mark Cuban-endorsed thing that helps keep bodies in shape or something. BOOOOOOOOOO I WANT A TIME MACHINE CUBES.