The Texas Legends Experience: It's the best kind of insane

A trip to Frisco to see the Texas Legends was entertaining, to say the least.

Share All sharing options for: The Texas Legends Experience: It's the best kind of insane

Behind one basket, inflatable bounce houses hung out side by side. On the opposite end, children congregated with basketballs, beach balls and trampolines designed to amuse them. And in between these two was a basketball court, where the Texas Legends took on the Rio Grande Valley Vipers in a D-League showdown.

The Dr. Pepper Arena could only be described as organized chaos, exploding with colors and noise that made a professional arena like the American Airlines Center seem serene.

Gallery: Photos from the Texas Legends

Click here for a full gallery of my shots while I was at Dr. Pepper Arena for the Legends' game night against the Vipers.

Gallery: Photos from the Texas Legends

The arena is located in Frisco, just 30 minutes from where the Mavericks were also playing a game against New Orleans at the AAC on the same Saturday night. This is where the Legends play their home games: in a wild atmosphere that employs all five senses from the moment you arrive. A couple of inflatable blimps float around the court prior to the game. Kids shriek and holler, as kids are ought to do. A Kia Soul hangs above the court as part of a giveaway contest -- resting just 20 feet above the court until minutes before tip-off, when they finally raise it into the rafters.

It was all somewhat fitting for the game that was played. For those unfamiliar with the Vipers, they run a super-paced offense with lots and lots of 3s-- 125.3 points and 45.8 3-point attempts a game (they should shoot 45 more in this game, making 13). It's quietly drawn some attention from around the NBA and even Grantland's Zach Lowe.

Texas already churns out a high-producing offense at 111.2 points a game, so it was easy for them to join in on the up-and-down style. All nine players who took the floor attempted a three point shot, including the team's center, Marcus Hubbard, who made 1-of-4 of his attempts behind the line. 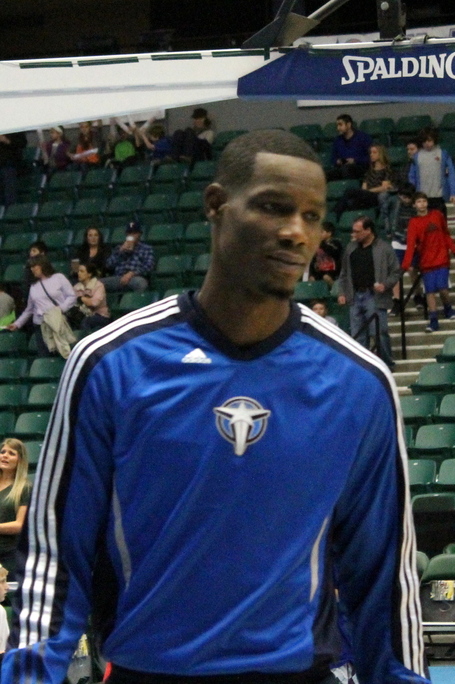 Ignoring the missed threes, Hubbard was easily the most impressive player. Despite joining the team just days before -- he still has yet to participate in a full practice with the team -- Hubbard fit right in on his way to 26 points and 14 rebounds on 10-of-16 shooting. The 6-foot-9-inch forward demonstrated NBA athleticism from his very first high-flying dunk in the pre-game layup line. Accompanied with his length on the glass and flashes of an outside game (he shot 42% from deep earlier this season with the Springfield Armor), it seems like his NBA future might not be so far away. Amidst the tumult, Hubbard stayed centered for his first game in a Legends uniform -- number 23, without his last name on the back because his personalized jerseys hadn't arrived yet.

Of course, that issue will be fixed before long. New jerseys are a way of life for the Legends. The Texas squad rotates through jerseys on a game-by-game basis, depending on the theme of the night. Since it was Hispanic Heritage Night, the jerseys were green with yellow lettering. The Legends are sponsored by the city of Veracruz, Mexico, which includes the name and city motto "Veracruz Imcomparable" right on the jersey. This practice is common at the D-League level, and every team donned a small advertorial logo during the playoffs.

There was no relief for the clashing colors at floor-level, either. Between the two teams, there was red and black D-Rose's and the new Hyperdunks, muted black-and-white Adidas and vibrant yellow-and-blue Nike's, and even a black pair of low-tops that looked like they might have been tennis shoes when I spotted them across the court.

After his team trailed for most of the first half, Devin Ebanks opened the second half with a three-pointer for Texas. The former Laker is the star of this Legends squad, and finished with another monster night of 34 points and 16 rebounds, helping his team surge back from a halftime deficit to take a 93-88 lead into the final quarter.

Between quarters, I heard the season-high attendance of 6,954 that visibly filled a majority of the seats. The game night emcee led a raucous "we are Legends" chant. Music flowed through the speakers at any and every break in the action, bass pumping. Dunker, a huge blue "dog" with floppy ears that served as the team's mascot, traversed the arena without rest, always doing his best to make the fans happy. The video board kept cutting to the miserable attempts to stay on a mechanical bull by the young'uns, before they inevitably fell to the inflatable padding below. 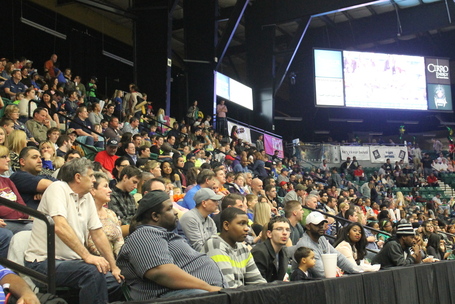 Later in the second half, a beach ball accidentally made its way onto the court and stopped play before being mercilessly kicked away. Apparently, this situation wasn't exactly unusual -- in a home game earlier this season, I was told a toddler ran onto the court and was almost run over. A referee scooped the child up and carried him out of danger, saving the day. The gif would have gone viral within hours had that happened in the NBA.

Despite their lead, the Legends couldn't keep up with the heart attack tempo of the Vipers in the final 12 minutes, losing 131-122. Still, the nature of the D-League means success can be found even with a losing score.

A solid individual night for players like Hubbard and Ebanks goes down as a "win" because it furthers their chance of finding their way to an NBA roster. A entertaining, compelling game that was competitive from start to finish was great for the fans. If this game was played to convince me to return, it made a compelling argument. The experience probably wouldn't work for the Mavericks or another professional-level team, but it was perfect for these two D-League teams trading blows back and forth.

If you're able to make it out to the arena, just remember that among all the madness surrounding it, there's still a serious game being played. After all, these guys are playing for their shot at something bigger.

Check out all 17 images published in a gallery here to get a better feel for the arena.