Ranking the Rankings, Week 11: Hangin' around

The Mavs again move up a tad bit, mostly because no one can figure out how to rank them lower.

Share All sharing options for: Ranking the Rankings, Week 11: Hangin' around

We're halfway through the season folks, and the Mavs are still that pesky team that everyone likes but no one wants to QUITE invite to their party yet. Some more on that below. But hanging around is perfectly fine with me, so long it keeps the team in playoff contention.

And a friendly reminder that these rankings don't reflect games played yesterday, including the Mavs' win over the Magic (which was, I suppose, expected and wouldn't change much of their ranking anyway). 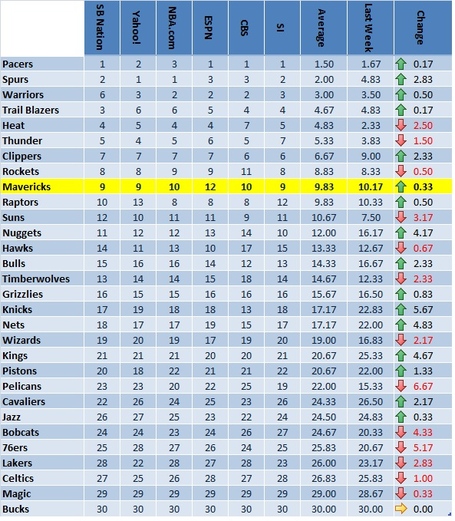 A couple of games against the injury-riddled Pelicans was a nice remedy after a blowout loss against San Antonio. Dirk Nowitzki was vintage Dirk in the second game of the home-and-home, notching 40 points in a three-point win.

For the second time in two weeks, the Mavs got away with a last-second foul that wasn't called. Kevin Love and Austin Rivers would have had to make all their free throws just to send either of the two games into overtime, but those results will obviously be on the minds of the Wolves, Pelicans or any other teams involved if the final playoff spot in the West comes down to a game or two.

Only three players in the past 25 seasons have posted a 40-point game at an older age than Dirk Nowitzki, who clocked in at 35 years and 206 days when he uncorked 40 in a narrow (and fortuitous) win over New Orleans. Michael Jordan did it at 40, Karl Malone did it at 39 and Shaq O'Neal did it at nearly 37.