In which I study some quirks of the Mavericks' lineup usage so far.

After the last few weeks of Statsketball, I've gotten a few requests to look at the Mavericks' lineups so far, and how they've been used. So, today, I have obliged.

How Carlisle manages player minutes and lineups is crucial to how the Mavericks perform. The bench this year is surprisingly shallow - Brandan Wright has been great, but Vince has only been a shell of what he was last year, especially when Wright isn't with him, and Larkin has been a good rookie but otherwise meh backup - and so the team's success largely falls on Carlisle's ability to stagger everyone's minutes in a way that gets maximal utility on the floor as much as possible.

To some degree, he's successful. Carlisle is one of the best coaches in the league at keeping his player's minutes managed while still keeping good players on the floor. That said, he has his weird quirks with lineups, too, and it's not always clear why he does things the way he does them.

I don't envy him of his task. As far as I can tell, it's impossible to keep only good lineups on the floor without playing Dirk Thibodeau-ian minute loads. Nonetheless, I'm a little baffled as to why, for example, Marion is still playing at Power Forward almost half of the time he's on the floor.

What follows is my attempt to look at what lineups have worked so far, and what hasn't worked quite as well.

It has seemed like, for the most part, the Mavericks tend to start off games better than the teams that they play against, and this stat is a nice confirmation of that. It's comforting, too, that the Mavs' main core is a solid net positive. It's not a great net positive, and it's not a positive that's going to win championships, but with better backups and if aging didn't exist, this could be a core that makes it to the second round of the playoffs. Hurrah!
It's also worth noting how much of an impact Dalembert has on these lineups. The starting lineup's offense is marginally better with Blair inserted for Dalembert (pushing it to a blistering 112 points per 100 possessions), but the defense is significantly better with Dalembert in over Blair (103.8 points allowed per 100, as opposed to 108 points allowed per 100).
Well consider me shocked that the Mavs defend better with a 7 foot tall center protecting the rim over a 6' 7" center. It's pretty amazing.
Crowder is a very good defender, but I don't think he's as good as these numbers would suggest. I'd be willing to bet that Crowder is the beneficiary, here, of Carlisle's wild lineup finagling. Lineups like the Caldy-Monta-Crowder-Dirk-Dalembert lineups defend so much better than the same lineup with Shawn Marion in for Crowder probably because this lineup plays against other team's bench units, where mistakes are far less costly. 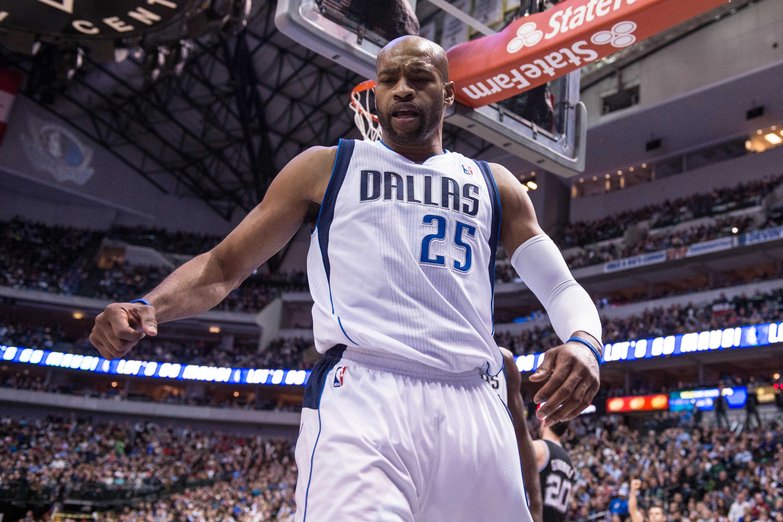 Last week's Statsketball on the Mavs' odds of making the playoffs
Then, the Mekel lineup does so much better than the Larkin lineup because, well, Mekel is a far better defender than Larkin, and the scoring in those lineups is 100% completely dependent on Dirk anyway.
As a side note, Vince and Crowder have a particularly nice chemistry on defense, as they keep opponents to 100 points per 100 possessions together; one of the most effective 2-man defenses on the team.
The moral of the story here is that Jae Crowder is not completely useless. He's a wonderful defender against bench players. As long as he's a 7th piece, who isn't asked to score at all but just fill in and keep the team's defense afloat, he's great!
Now, that sounds super snarky (and it kind of is), but here's a look at the defensive efficiencies of the 5 most frequent lineups that feature Jae Crowder: 103.6, 90.6, 99.3 99.3, and 96.6 points allowed per 100 possessions. That's fantastic. I'm the first to argue that Crowder's minutes should come down from almost 20 per game, but at 12-14 minutes per game, he could have real value.
For the love of God guys, just give Brandan Wright all of the minutes. Just all of them. Or, maybe vote him into the All-Star game. Frankly, I really don't care, just do something to appreciate how awesome he is. Celebrate him. Sing when he scores. Whatever. He's so good. He makes this team so much better.

HAHAHAHAHAHAHAHAHAHAHAHAHAHAHAHAHAHAHA
Now, this lineup is a victim of small sample size. I'm sure, really, it's not this bad. I wouldn't want Carlisle to keep using it, but it's not this bad. Still...I've never seen a number that small, I think.
I get that the Mavs are a little deficient in their frontcourt depth behind Dirk, and I get that Crowder is even worse at the 4 than Marion is. Still, as far as I can tell, there is absolutely no reason to make Marion play the 4 for 16 minutes per game. Dallas has 3 centers right now, and none of them are the permanent solution for the position. Two of them, however, could very easily be the solution to the backup Power Forward behind Dirk.
Blair, in particular, is only 6' 7" and makes much more sense as a Power Forward anyway; the only reason he isn't used at the 4 is that he has no particular jumpshot to speak of. And, admittedly, that's an issue. But in his brief time at the 4 so far, the Mavericks have been really good! At any rate, just given his elite rebounding, the Mavericks can't be worse with Blair playing the 4 instead of Marion.
For god's sake, if we can get Blair playing Power Forward more, it would ensure that Wright gets more minutes too, which is brilliant. Or vice versa.
There's just no reason to ever make Marion play the 4 again. Just stop it and make it go away. 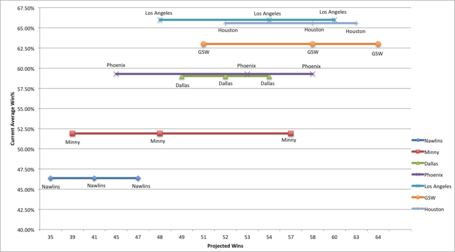 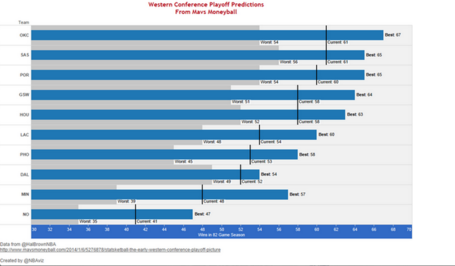 So, that's really cool, and I really appreciate his help with that. 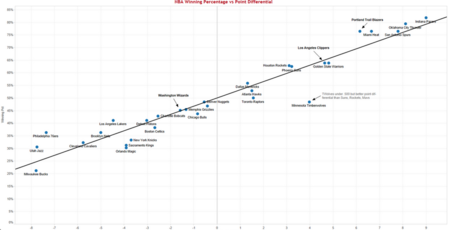 The graph is a visualization of each team's Win% (the percentage of games they've won) with their Point Differential (how many points they beat teams by per 100 possessions) so far. Point Differential tends to be one of the best predictors of how many games a team Wins, and there's usually a pretty direct relationship between wins and PD. That's, in part, what this line shows. Most teams fall right within the correlation.

What you'll want to note, then, is the that the Timberwolves are wayyyyyy off of the line. Odds are, that'll correct itself over time, and they'll end up along that main line somewhere. There are three possibilities for them, given that: the Wolves might start winning more, to match their point differential (which is, depressingly, a little more likely); they might start winning by fewer points and losing by more, so that their Margin of Victory (same thing as Point Differential) matches their Win%; or a little bit of both might happen. 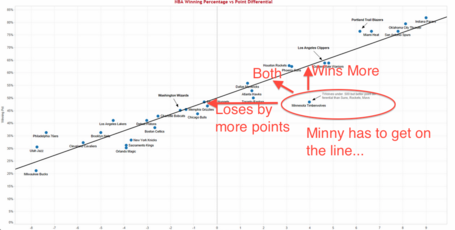 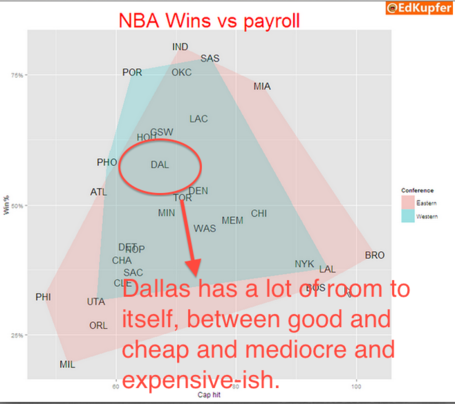 It's hard to know how to feel about Dallas given their position here. They're close to the Houston, Golden State, Phoenix group that has to feel great about themselves as both fantastic teams and cheap. They're not really in that group, though, as Dallas has a more expensive payroll than PHO and HOU and is pretty decidedly worse so far than both (given a healthy Bledsoe).
Dallas is also decidedly better than the Denver, Toronto, Minnesota group, who are all not as good as they want to be with probably not enough flexibility to make something happen.

So Dallas is somewhere between being in a really fantastic position and a really, really worrying one. So that's helpful.