Behind enemy lines with the Dallas Mavericks at STAPLES Center

The traveling press corps is an interesting contrast from being home at American Airlines Center. Go big or go home: I went to Los Angeles to find out how the other half lives.

Share All sharing options for: Behind enemy lines with the Dallas Mavericks at STAPLES Center

This season has been my first to attend Mavericks games as media, and if you've been a MMB reader for a while, you've seen any number of our writers recount their "first time." I've been resident on press row at American Airlines Center for almost every home match-up this season, and after the first two or three games, you have the routine pretty much down. It's addictive and fun, and standing a foot away from Dirk in the locker room while he talks after the game never loses its wonder.

I'm from Southern California, and a trip home this past week coincided with Wednesday night's Mavericks-Clippers game. I figured since I am a bigshot on can navigate press row in Dallas, I would find out how the other half lives. The Mavericks' wonderful Director of Communications, Sarah Melton, graciously set me up to join the team in Los Angeles on the 15th. 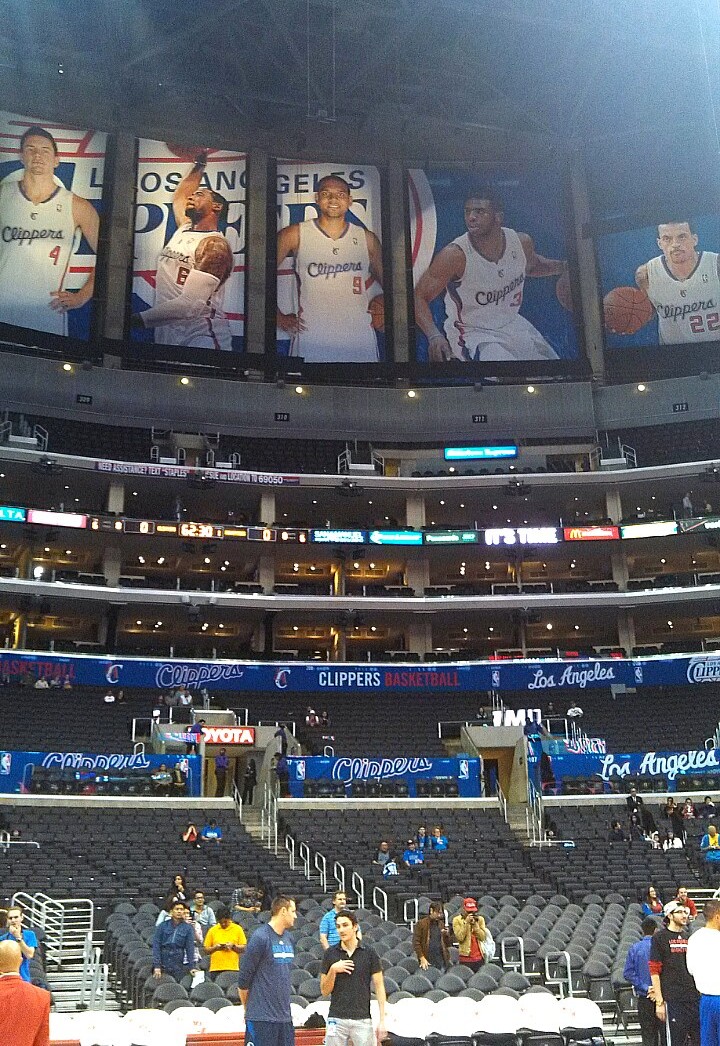 "I'll put you on the travel list!" Simple as that.

So to the City of Angels I went. I know where everything is at AAC after doing this half a season: parking options, the press entrance, the cookies; the elevator attendants know I want the press box or event level without me having to ask; most of the regular media knows me by appearance if not by name.

Well, my first challenge at STAPLES Center was just getting in. After a couple wrong turns and asking a few people, I finally found the media entrance. It wasn't remotely in the same place as the AAC media entrance, and I'm not sure why I assumed it would be. But it was next to a general entrance, and man, is it fun to go straight to the front of the line and just casually say, "yes, Rebecca Lawson, I'm on the Mavericks' travel list."

The media room was fortunately easier to find. Being from California I know everything is typically more expensive there, but media dining was surprisingly half the cost of AAC's (and better? Maybe that depends on the day though). But no free cookies or brownies -- at least, that I could find. So maybe it's a push. I do like cookies.

At this point I was looking for people I knew. The Mavs have a couple writers who travel with the team, and Earl K. Sneed of Mavs.com was fantastically helpful to me all night long. We headed up to the court looking for Cuban, who was in town for a taping of The Tonight Show. Instead, we found this:

(Take a moment with that video. Go ahead, I'll wait.)

The fun thing about the travel press corps is that it's just you and a couple other people. Unlike the AAC, where local media is everywhere, you get slightly better access to Mavs players and staff. For someone like me, who doesn't do this for a living, that was amazing.

Cuban joked with us for a little bit in the locker room, on the record first, then telling a few stories off the record. After locker room availability, I headed back to the media room to meet up with Steve Perrin, the manager of Clips Nation. You may recall that Steve and I have traded a couple of Q&As about our respective teams this season already.  It was like seeing an old friend, even though we'd never met in person. He gave me the grand tour of STAPLES Center, and it's very impressive, if not as nice as AAC. (Before you think I'm biased, the Clippers' Director of Communications positively raved about AAC as one of the nicest arenas in the NBA when I met him. So we Dallas-based Mavs fans are quite lucky in that respect.)

Thanks to Steve, who has been doing this for a long time and knows everyone there and can seemingly get through any door, I got to see quite a bit of the swank side of STAPLES. We checked out the Hyde Lounge, which is a swank (and very exclusive) bar/club that overlooks the court. Steve, of course, knew the guy in charge, who offered to buy us a drink and let me put friends' names "on the list" in case I wanted to come back later. We ran into the Clippers' president, Andy Roesner, and chatted with him for a while. Clips owner Donald Sterling was hanging out just a few feet away. Glitterati, y'all.

I'm used to sitting in the press box in the rafters at AAC, and assumed that would be the case at STAPLES as well. But that day, to our surprise, we were assigned to one of the press boxes right off the court. You walk out of the tunnel, down the length of the court behind the benches, up a couple steps, and sit down.

Way to impress a girl, Clippers -- this was my view: 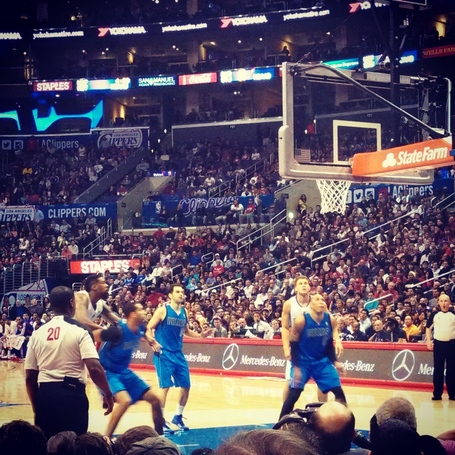 Sitting that close to the court, which I've never gotten to do before, gives you an interesting perspective. We all know that that game got particularly heated, and for once I was close enough to see the players' facial expressions as they fought through. Blake Griffin yelling at refs, their reaction to him, the Mavs players all yelling at Blake Griffin -- it was all right in front of me.

I struck out on my own at halftime to meet a friend who was attending the game that night and predictably got lost a few times trying to find my way back to the court. I finally found the tunnel, and just walked right out down the side of the court again, as the game was ongoing. I'm sure I'm probably on TV somewhere. That was quite a trip.

Y'all know the result of the game, so I won't make you re-live it. Afterwards, though, the difference in media access was again an impressive contrast to what I've experienced at home. As one of about three or four Mavs press there, Cuban talked to me just like he talked to the others. He actually asked me my opinion about a play involving Marion, which I remembered, but promptly froze and couldn't think fast enough to give him the "right" answer. I thought I sounded like an idiot, but he came back up to me specifically later to tell me something else, so I suppose I was fine. (Let this be your lesson, ladies and gents: dressing to impress and acting like you belong works.)

At AAC, the regular press folks all know that Dirk is the last player to come out and speak to media. We frequently have to wait quite a while. As we were waiting around in the visitor's locker room for Dirk, the L.A. media kept wandering in and asking if they missed him.

"Dirk will be a while -- he always is," I told one of them in response to that question.

And I smiled quietly to myself. With all the ridiculous access I had gotten all night, that might have been my favorite moment. Because I may not do this for a living, but right then, I knew as much as everyone in the room and a little more besides.