At the midway point of the season, the Mavs aren't moving much, but with one or two exceptions, neither is anyone else.

We made it to the midway point of the season you guys! This week's set of power rankings only really have one or two stories of note, as most teams seem to have reached a comfortable level of "this is who we are" (including the Mavs?). More on that below.

As per usual, these rankings don't reflect Monday's win against Cleveland. (Maybe that's a good thing. It certainly wasn't a convincing win.) 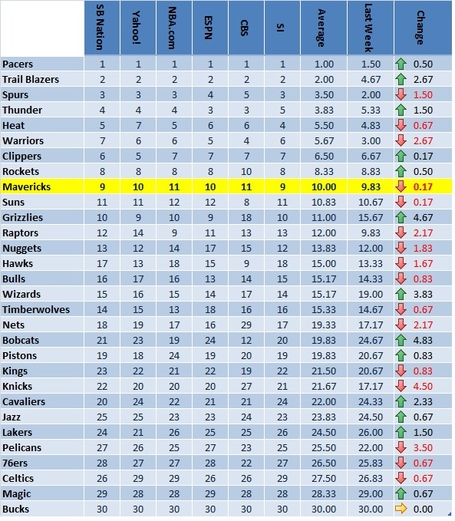 The Mavs' defense has been pretty atrocious the past few games, but on a more positive note, rookie Shane Larkin has put together back-to-back strong performances. Larkin had his best outing of the year in a win over the Suns, notching 18 points and five assists.

Same 'ol story for the Mavs. Their offense has been great, but they gave up 23 points in 4:36 to manufacture an epic collapse against the Clippers on Wednesday, and then got smoked by the Blazers on Saturday. The D has been particularly bad with Jose Calderon and Monta Ellis on the floor together, so Devin Harris, who played his first game of the season on Saturday, can only help.

If the Mavs wind up narrowly missing the playoffs, their list of regrets will start with the two games they squandered against the CP3-less Clips. Before blowing Wednesday's 17-point lead with 4:36 to go, Dallas was seven games over .500 for the first time since the 2011-12 season.

The Mavs have been sharp their last six games, winning four and averaging 11 three-pointers on 44.3 percent shooting. But their hot hand still wasn't good enough to beat the Clippers or Blazers, a fact that might encapsulate their entire season.