Devin Harris to save Justin Bieber

The hottest sports takes, the broadest pair of shoulders.

Share All sharing options for: Devin Harris to save Justin Bieber

Among many heartbroken Beliebers across the world, who couldn't Belieb it the first 30 times they heard that Justin had a problem with pills, was one back-up Mavs pg, Devin "Young Gun" Harris. But unlike those lazy adolescents who have nothing better to do, and no better strategy than to stand outside the court room with signs that say "Free Bieber", a sentiment that hardly passes for a defensive legal strategy, Harris, hero, poet, statesman, has a plan.

According to TMZ, he's offering Bieber a chance that our dear friend, Mavs contributor, poet, statesman Hal, would rob several nunneries to get: some sweet Devin Harris workouts. And why not? Some discipline, some goal, might well help our lost Canadian sheep, who has wandered too far from the fold and into a huge sward of new growth amphetamines or whatever.  At the very least, consistent gym time might get him to a point where he's again capable of actually walking up the Great Wall of China on his own actual legs. And you know what they say. Walk the Great Wall on human legs, don't end up becoming the male Lindsay Lohan, or whatever. Its a famous proverb. 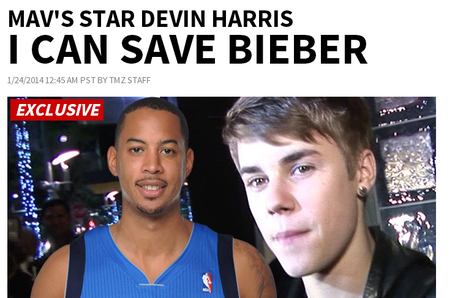 Devin Harris, we salute you, and your work with our troubled neighbor to the north. If there is room in your heart, and room in your gym, feel free to invite Rob Ford as well although that particular ghost ship of cannibal rats is probably also already too wildly adrift and about to crash into England. A national treasure needs saving. It's not our nation (thank god) and I don't treasure it. But if anyone can do it, it's Devin Harris, and I don't know any legal expert in the world who doubts that.

In fact, American legal system, why not just place the Biebs in Harris custody? And then film a reality show? And then send me some royalties? I'm not asking for too much. Just a Devin Harris-Justin Bieber roommate reality show which makes me a millionaire. Let's do this.

P.S. This is not a fan fiction Friday, and is a thing that apparently actually happened.