Ranking the rankings, Week 13: Mavs fall a little with a tough week

With a couple teams making big moves, the Mavs fall back for the first time in a few weeks.

Share All sharing options for: Ranking the rankings, Week 13: Mavs fall a little with a tough week

Hello beautiful people! It's your weekly dose of power rankings. This week, the Mavs have fallen a little bit. That is sad, as they've been on a steady climb/at least not moving down for most of the season. However, some reasons for optimism from our rankers and from me below. These rankings DO reflect the Pistons game from Sunday, in case you were wondering. (Because of Monday games lately, that has not been the case in recent weeks.) 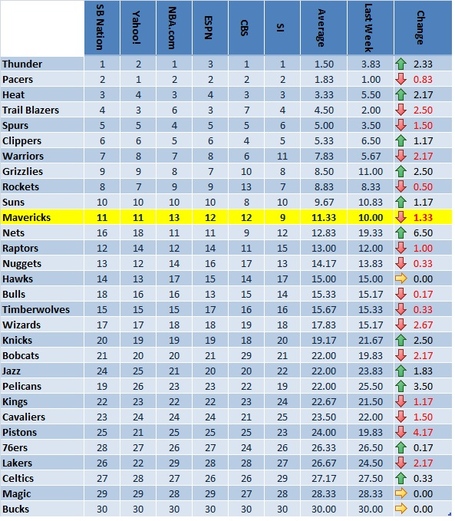 Dirk Nowitzki had been struggling of late, but the big German bounced back in a victory over the Pistons, scoring 28 points and grabbing nine rebounds. Even at age 35, Nowitzki is still performing at a high level, with shooting percentages above his career marks.

I still see Phoenix as more likely to drop out of the top eight than Dallas in spite of the Suns' more favorable average nightly point margin (plus-3.1 to the Mavs' plus-1.4). Fact is, though, no one in the West's top nine has a worse record against .500-or-better teams than the Mavs' 9-15 mark.

They're in the bottom 10 in defense, but their offense simply cannot stop hitting its mark. They've got a death grip on that playoff spot right now.

The Mavs may have already made their big addition for the stretch run before the trade deadline. Devin Harris, who made his season debut Jan. 18 in his return from toe surgery, scored 14 points in back-to-back games off the bench last week. The former All-Star could be a valuable, versatile third guard behind Monta Ellis and Jose Calderon.