The Mavs are holding steady in the composite rankings after a 2-2 week ten.

We had so much great content yesterday that we decided to save your weekly dose of power rankings to give you some reading while you wait for tonight's match-up with some team called the Spurs. They're not good, right? Mavs should win this one pretty handily? That's what I thought, great. Glad we're all on the same page.

So, rankings! Keep in mind this does not reflect last night's game against the Lakers. Here we go... 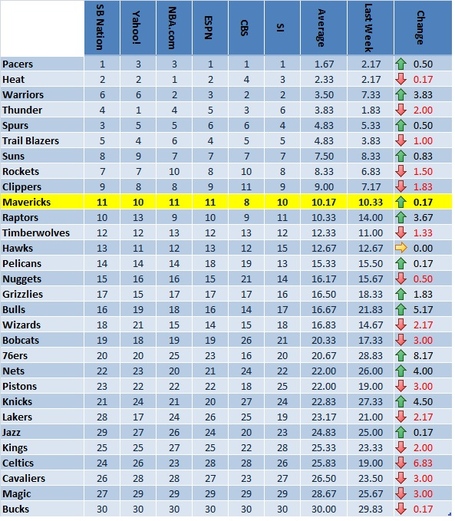 The good outweighs the bad, but the Mavs continue to be a hard team to figure out. They've won four straight on the road (scoring 109.4 points per 100 possessions) and have lost four straight at home (allowing 111.7).

It took the Mavs until Feb. 1 last season to win 20 games. So after they blew home dates with the vulnerable Clips and shaky Knicks, right on the heels of teasing road wins in Chicago, Minnesota and Washington to get to 19-13, who could be surprised that the ever-blunt Dirk Nowitzki erupted?

Showing some grit to hang on when things got rocky there for a bit. The defense is still the weak point, that's not changing any time soon.