Dirk Nowitzki is back

At 35, the Big German keeps humming along like people his age aren't supposed to.

Share All sharing options for: Dirk Nowitzki is back

Here at MMB, many of us have been confidently proclaiming that the Nowitzki of the last two years was a mirage. The argument, and it was a good argument, went like this: more than anyone in the game, Dirk depends on his unique leg strength and balance to find his offense. Leg strength and balance take training camp. Because of the strike-shortened offseason/ year, and because of his injury, Dirk hasn't had training camp in two years. Ergo, Dirk's falling numbers--down to 17.3 last season--were not a sign of Father Time, as Barkley put it, but a product of circumstances beyond control.

But nobody actually knew for sure, of course. But now, Mavs nation can confidently declare that Dirk is back. Not only that, he's playing so much better than anyone else near his age that it's absolutely ridiculous.

To take the first part first, Kirk Goldsberry, over at Grantland, posted this today on the best shooters in the NBA, and it actually features two Mavericks. Dirk at #2, and Jose at #3. But Jose, of course, can pick his spots more than Dirk, he's far less the focal point of opposing defenses than Dirk. As you can see from that chart, Dirk is ridiculous everywhere except for, for whatever reason, left-arc three-pointers. 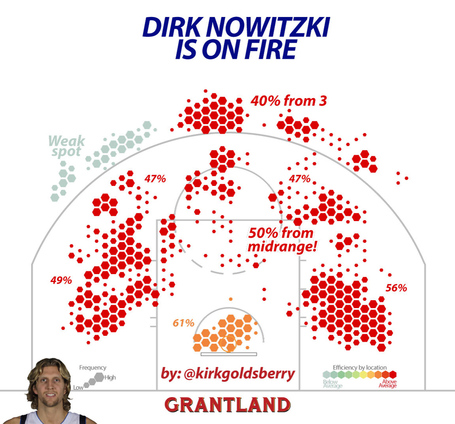 With Dirk, it's never been how good he is at shooting, it's how good he is at shooting from EVERYWHERE. And as we can see, that chestnut is still popping on the open fire, or whatever the metaphor is. LeBron may average just that much more points per shot, and the other four guys on this list are very good at taking their shots from where they are efficient -- but it doesn't matter to Dirk. He's efficient everywhere. He's making it from everywhere. He's the Visa Card of shot charts.

As for the 2nd, you know, we don't want to go crazy here. Dirk obviously has been affected by time. Sportsriters outside of Dallas like to pretend that Dirk was never a good rebounder. He was. He wasn't a great rebounder, but from 2000-2009 he averaged 9.2 boards a game, which would be good for 17th in the league this year. Good. Definitely good. But now he actually is a bad rebounder, grabbing just 5.9 which makes him 25th among power forwards.

But oh, that efficiency, at that usage rate.

Just how unusual is Dirk's success at his age? The absence of Kobe, this season, is not great for the league. But if it's good for anything, it's good for appreciating how completely ridiculous what Dirk's doing is. As of right now, Dirk is 14th in the league in scoring at 21.1. But there's only one other player in the top 20 in their thirties and it's the 30-year old Kevin Martin. David Lee, at 23rd, is 30. Tony Parker, at 33rd, is 31. Zach Randolph is 32 and Jamal Crawford is 33. Dirk is the oldest person in the top 40 scorers in the league by two years, and five years older than anyone in the top 30.

He is ridiculous. And he's most definitely back. At 35 years old, I'd still take him over any PF in the league not named LaMarcus Aldridge (except when LBJ or KD play the 4). And even if you add a couple more names to that list--Kevin Love being the obvious one--it's clear the Mavs still have, for the moment, a star to build around. As long as he stays good, that window stays open.