Player Preview: What more can be said about Dirk Nowitzki?

The greatest player to don a Maverick uniform is about to suit up for his 17th year.

Share All sharing options for: Player Preview: What more can be said about Dirk Nowitzki?

Our season preview sign up sheet is crowded. With a new season just around the corner, your Mavs Moneyball staff will be putting out amazing content over the next month as we work our way towards the season. The Dirk Nowitzki preview, though, remained open. As of yesterday, no one had signed up to preview the Big German. Why?

I imagine it's because after 16 seasons of brilliant basketball, writing about the greatest basketball player to ever put on a Dallas Mavericks uniform is a daunting task. He's been a part of my life longer than anyone to this point who isn't a relative. Thank goodness this is a fan blog, because writing about Dirk objectively is nearly impossible. What more can be said about the figure who has defined Dallas sports for over a decade?

There aren't more than a handful of players in NBA history who have played at an All-Star quality basketball past their 15th season. Dirk Nowitzki is about to enter year 17 while playing at an absurd level.

The 2012-13 season was the year of doubt for Dallas and Dirk. It was the first season in over a decade without a playoff berth, largely due to an unforeseen knee surgery which caused Dirk to miss more than 30 games. He entered the 2014 season with large questions surrounding his age, his production and impact in a conference that only seems to get harder every year. 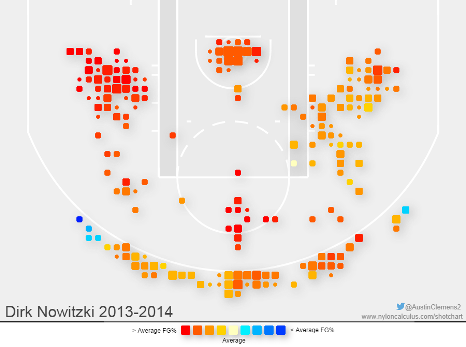 Much of this renaissance can be attributed to simply being healthy, but a great deal of the credit also goes to last year's teammates. The Monta Ellis-Jose Calderon back court opened things up for Dirk. Toss in Brandan Wright and Vince Carter during closing stretches and the Mavericks were nearly unstoppable on offense. Though Dirk still led the team in scoring, Monta Ellis proved his value with his 19 points per game.

At this point, every year with Dirk feels like a gift. Last pre-season, we were all simply hoping for one more year of Dirk at a high level. We got it. Asking for more at this point seems greedy. And yet...

The team, as it has been reassembled, looks really promising on paper. The weaknesses of last year's squad, small forward and center, were addressed via the additions of Chandler Parsons and Tyson Chandler. Dirk's weaknesses at this point in his career (mainly lateral movement on defense and rebounding) should be bolstered by his new front court teammates.

At this point, every year with Dirk feels like a gift.

Pair this with the explosive pick and roll combination Dirk has with Ellis, and Dirk could very easily see another 20 point per game season on absurd shooting numbers. Of course, the plan should include getting Dirk to the 28 minute per game mark, down from his 32 minutes per game over the the last three seasons.

The structure of the team could allow Dirk to be even more efficient, while playing less and staying fresh as the season wears on.

Dirk suffers an early season knee injury that knocks him and the Mavericks off course. The lack of a true power forward backup results in Parsons and Aminu playing out of position. Dirk misses 4-6 weeks and Dallas isn't able to get on track until February, missing the playoffs just barely after a late season rally. That's the most obvious route to disaster.

Realistically, Dirk's season relies more and more on the play of his teammates. Tyson's health and Monta's effectiveness will be massively important. If either falters due to health or if Chandler Parsons can't shoulder the load, things could go south for Nowitzki. He can always carry the team for short spans, but the days of Dirk dragging the team to wins night after night are gone.

There's also the slight chance that Dirk erodes just enough to limit his effectiveness everywhere. During the playoffs against San Antonio, the Spurs provided a strong blueprint for guarding a less mobile Nowitzki (which may explain why he's tinkering with his release). This forced more of the offensive pressure on Monta Ellis, which wasn't ideal for Dallas. A decline in Dirk could cascade to problems for the whole team.

When does the party stop?

This is just a season preview, so thinking long term is a bit against the rules. But we're now close to the 17th year of this crazy ride, which is such a fringe experience as a sports fan. When will it end? Are we close? Does Dirk's play style, size, and shooting ability make it reasonable that he could play for two, three, or even four years? Is FIVE more years of Dirk Nowitzki possible?

Declines in sports usually happen abruptly, but in basketball we're seeing more and more athletes who are able to extend their careers by years simply by transitioning into smaller roles (Ray Allen, Kevin Garnett, Tim Duncan). Dallas is going to try that this season, but taking a more balanced approach to scoring. I'm skeptical, if only because Dirk's needs the ball a great deal to be effective.

So what more can be said about Dirk? Plenty it seems. Dirk is here with us now and that's both important and wonderful. This season has the potential to be special and, as always, Dirk Nowitzki is a the driving factor.