After all the exchanges between Cuban and Morey, how do the Rockets actually stack up on the court? Turns out they'll still be a major threat in the West.

Oh boy. It's safe to say the Mavericks and the Rockets rivalry has heated up a bit, no? These two teams have always shared some battles on the court in the past but now it's starting to spill over in the front offices.

Among the shots fired from Mark Cuban and Daryl Morey, Chandler Parsons free agency, and the fact that both teams are expected to battle for home court in the brutal Western Conference, there will be no shortage of storylines when these two teams meet.

Let's take a closer look at the Rockets, shall we? 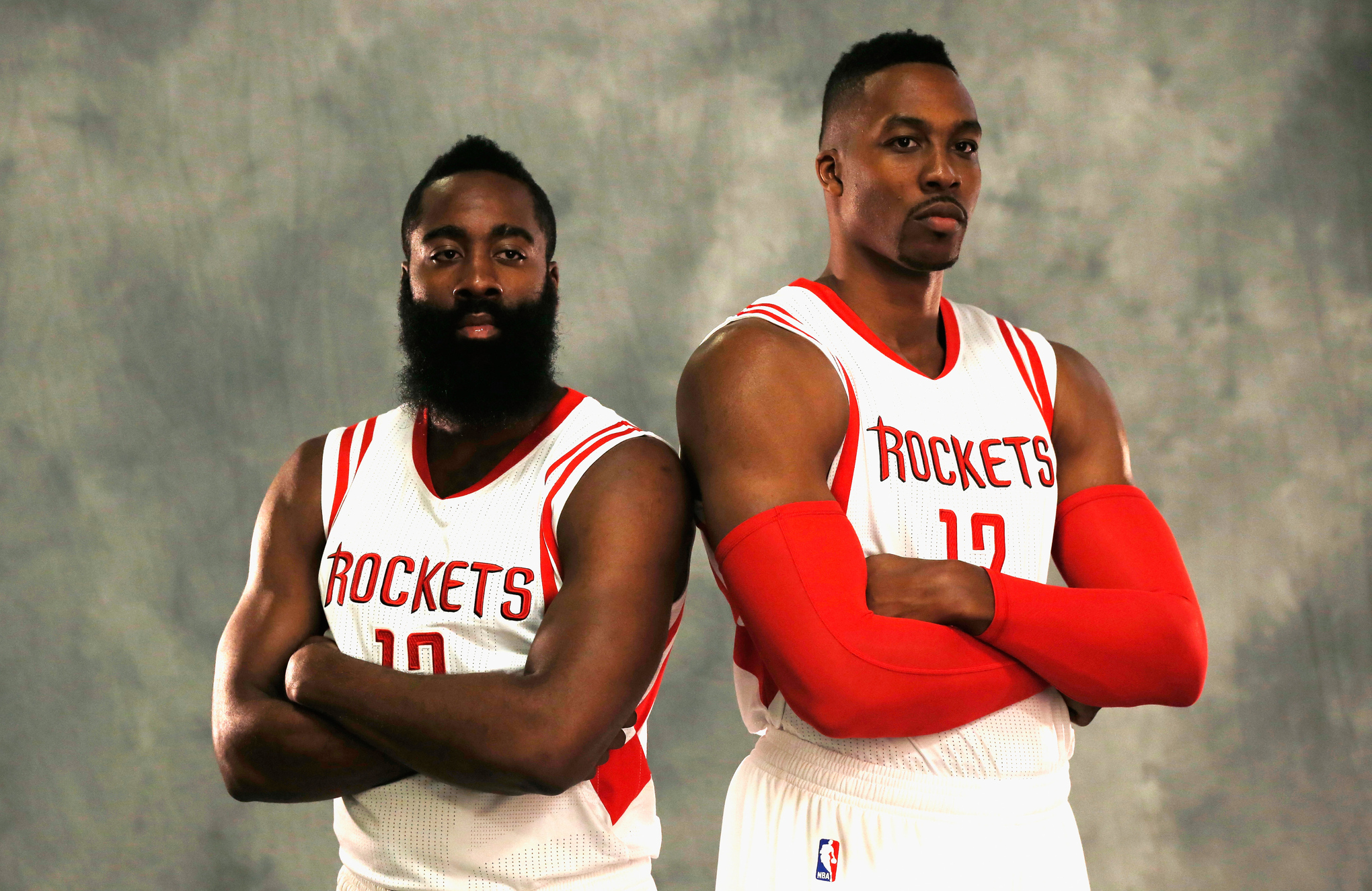 To call Houston's offseason a disaster is probably overstating it a bit, but it really didn't look good. The Rockets seemingly were poised to become the darlings of the NBA summer for the second-straight year, a lock to snag Chris Bosh from the LeBron-less Heat and field one of the most devastating five-man lineups in the entire league.

But Bosh shockingly chose his comfort in Miami, not to mention the comfort of more money. The Mavs pounced on Chandler Parsons, signing him to a max offer sheet loaded with little tricks that made the contract that much less desirable for Houston.

Houston decided to sign Trevor Ariza to a 4-year, $32M deal and let Parsons walk. The loss of Parsons hurts combined with the fact that Houston traded away valuable players like Omer Asik and Jeremy Lin for nothing of on-court value for this upcoming season.

The Rockets made some small tweaks to their bench as well, getting former Mavs hero Jason Terry in a trade and snagging Alonzo Gee from Cleveland.

Houston was one of most successful teams on offense last year, ranking fourth in the league with 108.6 points per 100 possessions.

A lot of that can be credited to Houston's style and James Harden. We'll get to Harden's warts in a bit, but for all the grief he gets on the defensive end, there's no better offensive off-guard in the league and he's a top-five offensive player regardless of position.

Harden has the complete package. He's deadly off-the-bounce, mixing in herky-jerky hesitation moves with smooth crossovers. He can finish at the rim with both hands and is a master at getting to the free throw line (as irritating as it can be for opposing fans). Harden's three-point shot wasn't as consistent as it could be (he only shot 36 percent, the second lowest output of his career) but granted, he took a lot stepping back off the dribble.

There's no better offensive off-guard in the league and Harden is a top-five offensive player regardless of position.

He's also not only a willing passer, but a great one as well. Harden practically initiated the offense for the Rockets, just running pick and roll after pick and roll to get into the paint and create chaos for opposing defenses.

The Rockets did a decent job of surrounding Harden with the right players on offense. Parsons was a good shooter and great secondary playmaker to take advantage of the attention Harden sucked in. Dwight Howard is of course still a monster in pick and rolls and his post-ups allowed Harden to play off-ball a bit more.

But it wasn't always a pretty picture with the Rockets on offense last year. Houston's balls-to-the-wall, no-set-plays style backfired at times in close-game situations and their reliance on Harden to do everything played into Houston's first-round exit to Portland, where Harden only shot 37.6 percent from the field.

So what about this year? Ariza should provide Harden and Howard their best perimeter spot-up threat, so long as Ariza's last two 40-percent marks from three weren't solely because of John Wall's ability to feed him corner threes.

But it looks a bit bleaker after that. Harden should be brilliant again and Howard looked downright Orlando-ian during that first round series with his back to the basket. The trouble comes in secondary playmaking.

This is where losing Lin and Parsons hurts the most. Last season, Harden could get into the paint and find those two players when the defense collapsed. Both Lin and Parsons were more than capable of taking advantage of a backpedaling defense and kept the Rockets offense flowing. Patrick Beverley could provide some of that, but that's not the best part of his game.

Who else can fill that void? It seems like the Rockets might be asking a lot of Terry, who has looked washed up in the last two years. Ariza is basically a spot-up guy only. Maybe second-year point guard Isaiah Canaan can provide some of that. He has the skills, just not the experience. Terrence Jones was a great fit last year and I wonder if the coaching staff will bestow a bit more responsibility on his part. He's a pretty nifty passer for a big.

But really, the Houston offense should be fine. Harden will get buckets, Howard will feast off Harden's dribble penetration and Ariza should continue to see open looks in the corner from playing off those two. The big worry is the playoffs and how Houston will be able to get playmaking outside of Harden without Lin and Parsons.

The good news for Houston is that Howard was much closer to his Orlando-self last year than the year previously in Los Angeles. The bad news is he still wasn't all the way there.

Houston was 13th in defensive efficiency last year, a solid mark but not one that usually goes with title contenders. Howard was more springy last season in protecting the rim and detering pick and rolls, but he didn't have a lot of help.

Outside of Asik and Beverley, Houston just didn't have a stable of consistent defenders to surround Dwight with. This normally isn't a problem if Dwight was 2009-2011 Dwight (where Orlando had a great defense with Jameer Nelson, Hedo Turkoglu and Rashard Lewis). But he's not and he needs a bit more help.

And he certainly wasn't getting it from Harden:

Harden's defense was just absolutely abysmal last year. There's no getting around it. While he's making claims about improving it this season, make no mistake -- attacking Harden is the way to beat this Houston defense until he shows otherwise.

Ariza is a much better defender than Parsons and can probably consistently defend more positions than Parsons could as well. The Rockets have a legitimate defensive wing-stopper to pair with Howard and the starting five of Beverley-Harden-Ariza-Jones-Howard should be an improvement over last year's on defense. Alonzo Gee should help the perimeter defense as well and grab some valuable backup wing minutes. Editor's note: Gee was part of the trade for Jason Terry and no longer on the Rockets roster. Whoops!

The problem might be when Howard goes to the bench. There's no Asik to soak up minutes and Houston's backup bigs leave a lot to be desired. There's Joey Dorsey, Jeff Adrien, Donatas Motiejunas...and that's about it. That's putting a lot of pressure on Howard to stay out of foul trouble and try not to overextend his minutes in the process.

Kevin McHale is about about as well-respected as any other coach/former player in the league. He was a brilliant player in Boston and really didn't settle in as a successful coach till he arrived in Houston.

For what it's worth, I'm not sold on McHale as the long term coaching solution. The offense seems to need a little more structure and the staff could use a defensive coordinator ala the Mavs with Dwane Casey and then Monte Mathis.

But McHale is well-liked by his players and it seems his fast-break style suits the talents of Harden and the young roster. The Rockets are one of the most efficient shot-taking teams in the league, no doubt influenced by Morey's presence but also spurred on by McHale. It remains to be seen if McHale can make the necessary adjustments needed in a playoff series but he experimented with different lineups against Portland and trusted young players like Troy Daniels.

WHEN THE TEAMS MEET

One of the best things the Mavs did last year when they met up with the Rockets was have Monta Ellis attack James Harden. In the Mavs two wins against the Rockets last year, Ellis scored 37 and 18 points and got to the free throw line at least 10 times in each of those wins.

It also helped that the Mavs depth carried them against the Rockets somewhat lackluster subs. The gameplan for this season should be the same: get Ellis matched against Harden on offense, use quality depth to wear down Houston and, of course, unleash Dirk. Unless the Rockets want Dwight on him, there's no one really left for Houston to guard Nowitzki.

Defensively for the Mavs, it'll be tougher. Houston crushed the Mavs in the paint last year, with both Harden and Dwight having field days at the basket. There's no more Marion to deter Harden's stepback jumpers, but collectively the Mavs assortment of perimeter players (Parsons, Harris, Aminu, Crowder) will have to keep Harden away from the basket as much as possible. Tyson Chandler will be able to hold his own against Dwight more than Samuel Dalembert ever could, but that's still tough. Houston is a matchup nightmare for any team with Harden and Dwight.