Eventually, the greatest Maverick in franchise history is going to start looking his age. But it isn't happening yet and it might not anytime soon. Last night was just another reminder.

Do not go gentle into that good night,
Old age should burn and rave at close of day;
Rage, rage against the dying of the light.

If you've seen Christopher Nolan's latest epic, Interstellar, you are no doubt familiar with this old Dylan Thomas poem. It's used repeatedly throughout the film and represents a major theme of how mankind must explore uncharted territory to prevent its extinction.

I won't spoil anything but it's a pretty emotional movie. Hearing that poem, seeing that movie and dwelling on it the last week or so has actually made me think of Dirk, somehow. Leave it to me to somehow mixup Christopher Nolan and Dirk.

Quite frankly, Dirk shouldn't be this good. There should be some sign of slippage. Yet here we are, 12 games into the season and Dirk's over here posting the league's 5th best PER (26.07) and sporting sexy shooting splits of 54.7/44.4/84.2. His assist numbers are still good, his turnover numbers as fantastic as ever and his help defense is still adequate. Hell, he's even tweaking his famous jumper 17 years into his NBA career.

Dirk still working on his jumper 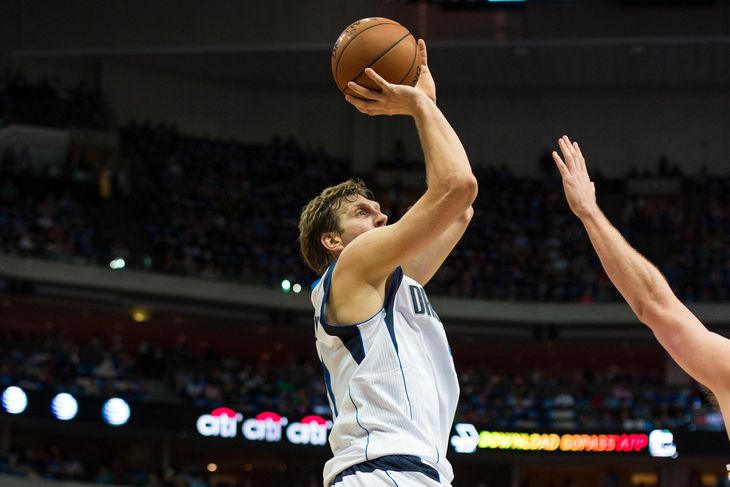 Sure, there's been some obvious decline physically. He's nowhere near the rebounder now that he was three to four years ago. His free throw rates have dropped as he relies less and less on getting to the rim to draw contact. He might know where to go and be in the right spot on defense but there's no doubt it's harder for him than ever before to keep up when teams go after him in pick and rolls.

BUT, he's also 36-freaking-years old and still one of the top 15 players in this league. Other older stars from his generation have either flamed out, are less efficient or reduced to lower minutes/roles. Kobe Bryant is leading the league in scoring, sure, but his shooting numbers are awful. Kevin Garnett is a shell of his former self, still valiantly battling every night, but no longer an elite player.

Tim Duncan is perhaps the closest comparison, sporting a 20 PER this year and still being a fantastic defender and rebounder. But his offensive responsibilities have been reduced drastically to go along with less minutes and games. The Spurs simply don't ask Duncan to be an MVP every night, and until this season, the Mavs were really asking that from Dirk.

It seems like this season Dirk finally doesn't have to be the guy almost every game. The arrival of Chandler Parsons, the return of Tyson Chandler, the continued brilliance of Brandan Wright and the dynamic play of Monta Ellis and Devin Harris has given Dirk more weapons than ever before.

With the arrival of all these pieces and under coach Rick Carlisle, the Mavs offense has come to rely less and less on Dirk isolations and post-ups. A little over 70 percent of Dirk's buckets this year have been assisted on. Dirk is still the core, the engine -- but he's no longer the starter, the instigator.

I keep waiting to wake up one day and see Dirk start to show his age. Maybe his shooting dries up a bit, his three pointers start coming up short and he fails to create enough separation on the handful of post-ups and isolations he does receive each game. Even when knee surgery derailed his season two years ago, he returned the next season almost better than ever, almost posting a 50/40/90 shooting season. He's impeccable and timeless.

Even last night against the Wizards, you saw how Dirk doesn't have shoulder the team. He was human, one of the rare nights he appears so, making just 4-of-12 from the field with 13 points. It was Ellis' hot start (on the way to a season-high 34 points), Wright's spectacular plays above the rim and J.J. Barea's surprise hot-fourth quarter that paved the way for the Mavs crucial road win against one of the East's best teams.

Even with all those contributions, with Wright's helicopter dunks, Ellis' timely pullups, Barea's fearless buckets and Tyson's ferocious blocks, the Mavs actually did need Dirk. He returned to the game minutes after a nasty looking ankle sprain in the fourth quarter. One more time last night, he needed to be the guy.

Like clockwork. I'm not sure when Dirk will start to slow down. I feel like we can keep rolling the ball out to him for another three, four, five years and he'll still blitz the league for around 20 a night with fantastic shooting numbers. I keep telling myself the fall is going to happen eventually. But Dirk keeps pushing time back.

I wish we could send Holger and Dirk to a distant planet near a black hole for a summer and train -- then we let Dirk come back as a spry 145 year-old and reign hell upon the future robot basketball league. He'd still do it, he'd still find a way. I would never even doubt him.

Dirk isn't necessarily exploring new avenues to prevent his basketball extinction. But he's still finding ways to keep old age at bay with his relentless work ethic and precise skills. Charles Barkley famously said two years ago that Father Time is undefeated and that Dirk was long past being an elite player, as Dirk struggled getting back into shape after the NBA lockout.

"Father Time is going to win, man," Barkley said. "You talk about next year? He's just going to be a year older next year."

That next year? Dirk had preseason knee surgery and had the worst season since his rookie year. Maybe Charles was right. But the year after that? When Dirk should have been a year older and a year worse?

Do not go gentle into that good night Dirk. Rage, rage against the dying of the light.