The Mavs have come out to a hot start, and the Mavs' usual culprits are the guys running the show

We're now 12 games into the Mavericks' 2014-15 season, still in the midst of the "small-sample-size theater," even though things like shooting percentages, point differentials and, yes, even win totals are starting to crystallize into something like how it will look for the rest of the season.

We're about 6-7 games short of all of that data really "normalizing" -- becoming like it will for the rest of the season, more or less -- and things will change even further from there, but we're approaching something like a sufficient sample size, and now is a great time to take stock of where the Mavs might be, and where they might be going.

At the moment, Dallas has the best point differential per 100 possessions (usually the best individual indicator of future success) of any team in the league, and the best offense in the league by miles. With a 75 percent win percentage that would translate to 62 wins over an 82 game season, if the season ended today, Dallas would be sitting pretty.

A lot of that is inflated by winning against bad teams, of course: Dallas trounced Utah ... twice, and totally dismantled the possibly-worst-NBA-team-ever Philadelphia 76ers and the tanking Timberwolves. The Mavs have only really been tested against the Pelicans, Kings, and Wizards and gotten out with wins (barely), and two of those teams weren't projected to be in the playoff running.

On the other hand, if you even take away the Philadelphia win that's clearly inflating Dallas' numbers, Dallas would still have an offensive rating of 116.9 and a defensive rating of 110.2, per Nylon Calculus' efficiency stats, which doesn't estimate the number of possessions on which the information is based but rather use SportVU possession counts.

That offense would still be both the best in the league by a mile, and still on track to be the best of all time relative to the league average, even after it continues to regress further. 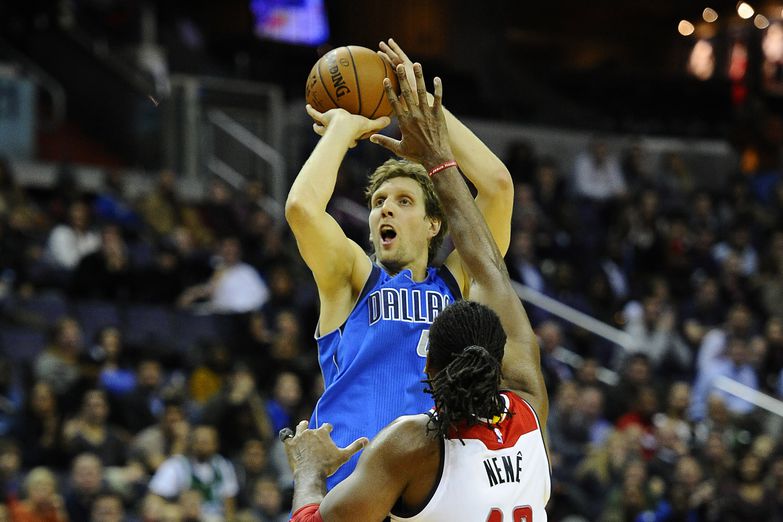 The point differential of 6.7 -- which, again, is the best actual predictor of success -- would still be 5th in the league without the Philly game, behind only Golden State, Toronto, Portland, Memphis, and New Orleans (who themselves massively inflated their net rating in a beatdown on Minnesota).

Their expected (pythagorean) win percentage, based on that 6.7 net rating, would be 71.625 percentage, or 58.5 expected wins.

I said this last time and I'll say it again though: all of this will drop a bit. Dallas has yet to play the Rockets, Grizzlies, Bulls, Cavs, Warriors, or Raptors, and that'll be the first real test of "projected 59 win team: the Dallas Mavericks."

Still, as things are starting to take shape, the Mavs are coming out looking like real winners for this year. Last week we looked at some of the things that the team is doing well, so this week, we'll look at some things that the players are doing well.

At this early juncture it looks like the Mavs are being driven by all the expected culprits: Dirk Nowitzki, and the core of big men that Carlisle has to work with.

Right now, those three pieces are going to drag this Dallas team to something near greatness, no matter how hard Jameer Nelson, Raymond Felton, and J.J. Barea complain about it.

Let's look at Dirk's raw stats for just a moment and take a deep breath:

The man is 36 years old, but he'll dare you to try and tell him that to his face.

I mean, remember, this is 12 games into the season and shooting percentages are actually starting to get close to what they'll be like all season! And Dirk is shooting 46.9% from 3!! He has 63.8% TS%!! WHAT THE HELL, DIRK?!

The crazy thing is: despite all the firepower on the rest of the team, Dirk's usage rate is actually higher than it has ever been since the championship season. Despite being a year older, Dirk is ending more possessions than he has in a long time.

I would suspect this is largely a function of how he's being used: Dirk is getting almost exactly as many spot up opportunities this year as he was last year (7.4 now as opposed to 7.5 last season, per NBA.com's SportVU player tracking), but that's far more catch and shoot attempts per-minute than last year. Dirk's getting those shots in a more advantageous position for him, too, thanks to the extra threats of Chandler Parsons and Tyson Chandler.

Dirk's always going to shoot those open catch-and-shoot opportunities, and since he's getting more, his usage is increasing. The fact that he's taking one fewer pull-up jumper per game seems to defend that much.

Don't let that fool you into thinking that Dirk's gotten complacent with his performances, using his gravity to let teammates do the work for him. Dirk is still taking four pull-up jumpers per game, and he's scoring 5.3 points per game on those shots. He's shooting an obscene 62.5 percent on pull-up jumpers, and an even more obscene 80 percent from three. Both are the league leading marks among players shooting more than three pull-up jumpers per game in significant minutes.

I mean, he did this on Wednesday, after all:

For all the glamorous offseason additions -- Chandler and Chandler inc, Aminu...Raymond Felton... -- it's still Dirk Werner Nowitzki carrying the team on his back, and we wouldn't expect anything less of him anymore.

Don't try and tell us that Dirk is too old, either.

Dallas thrives on the strength of the bigs

Dallas has forever and ever and ever relied on guard play to complement Dirk in their attempt to to chase a championship. 2011 was the first and only year that Dallas ever had a genuinely good center, and it was definitely the first time that Dallas' second best player was also the center (though, we miss you JET!)

It feels weird, then, to be watching this Mavericks team where the big-man rotation of Dirk Nowitzki, Tyson Chandler, Brandan Wright, and Al-Farouq Aminu is just immolating opponents while the guard rotation is decidedly weak.

And, look: I know Parsons is a "big man." But he stands on the perimeter a lot, doesn't pay attention on D, and drives recklessly, which on this team pretty much immediately qualifies you with "guard status." (And I say this as a huge Parsons optimist).

But just one look at the stats of the big-men vs the guards tells pretty much the whole story. Consider this graph of everyone's BPM, basketball-reference's new +/- metric that uses lineup data and box-score info to account for the +/- value of a player independent of teammates:

The big men are just flat-out outclassing the guards. And the only one who can keep pace, Devin, is a decided net negative on defense, which is not ideal when he's mostly playing next to Monta.

That's not to say that, like, the guards are "bad." Everyone but Jameer is a net positive (which, can we just get the formalities out of the way and start Devin now?), and Monta -- despite his still-very-very-bad D -- is a very good basketball player, and it feels unfair to nitpick when Dallas is sporting maybe the best offense ever.

Just about any conceivable 3-man lineup combination of Tyson, Aminu, Dirk, and Brandan Wright has resulted in a massive net positive point differential: the worst of that group -- Aminu, Dirk, Wright -- was +14.9. The best -- Aminu, Dirk, Tyson -- was +49.

Opposing teams just don't know what to do with Tyson or BWright if Dirk is on the court: stopping big men who are that athletic, and that good at catching the ball and finishing, requires basically constant attention away from the ball.

But, giving either player that constant attention means that they can never show at Dirk, and never try and disrupt a pick and roll when Dirk's involved, which is also a terrible idea. It's a catch 22. Aminu, as it turns out, is almost at that level as a cutter and athlete himself.

In some ways I think the guard play has been so disappointing if only because they're not a cheat code. Devin's struggled to shoot, make decisions, and pay attention on D, but he's also been really good as being, basically, Monta-lite. Jameer can at least handle the ball and shoot. Monta is a beast. But all of those players can't (or won't) defend right now, and all of them struggle to make decisions. They're not a cheat code.

The big man rotation, however, is a cheat code.