Statsketball is back, and it's time to look at some of the weirdo numbers that happen after four games. In short: the Mavs are busy burninating the countryside.

Once again, with the start of the season, Statsketball has returned to bring you all your favorite statistical nuggets and delicious numbers to help explain some of the deeper parts of what's going on with your Mavs this season.

To start the year, I'm going to grab all the completely ridiculous small sample size numbers from so far in the season, so we can bask in how freaking awesome this Mavs team appears to be.

At this early juncture, it looks like the Mavs offense is on pace to be historically good, to the point where the bad defense doesn't even matter, every single lineup that Dallas rolls out can be a deadly buzzsaw in its own right, and, most importantly, this team is so much freaking fun.

Dallas' offense will burn stadiums to the ground

I remember when I was taking a history class at UT and the professor said that the Mongols under Genghis Khan killed 10 percent of the entire world's population. He said he could imagine the citizens of Samarkand telling themselves, "well, they can't come in and kill all of us."

I bring that up because I'm pretty sure these Mavs are basically the Mongols.

The offense is actually so good, that the Mavs are playing atrocious defense and it legitimately doesn't matter. I've never seen that before. I've never seen a team be so good on offense that they just completely negate the effects of a terrible defense, even with the seven seconds or less Suns.

Like, the Mavericks are the third worst defense in the league right now -- even worse than they were last season -- allowing an embarrassing 109 points per 100 possessions right now, and a still-bad 107.7 against the Pelicans and the freaking Jazz and Celtics. For reference, that means that Dallas' defense is so bad that even terrible teams are scoring as if they were the Rockets from last season.

But, because Dallas is also scoring a completely ridiculous 118.1 points per 100, the Mavericks are still outscoring teams by more than nine points per 100 possessions, which is the fourth best point differential in the league.

Dallas will almost surely cool down a bit, but that may not actually matter, in the long run.

Somehow, the team with the third worst defense so far is also the fourth best team in the league at this super early juncture. THAT is how good this offense is.

In fact, that piece of information is so insane that I decided to project how the offense would look after some regression to the mean, and see how this Mavericks squad might compare to some all-time great offenses.

To measure the offenses across eras, I used this analysis from Andrew Lynch on ORTG+ and DRTG+ (or adjusted efficiency) where the ORTG is measured against the league average in each year.

To project how the Mavericks offense will regress, I first considered how they stand currently relative to the current variance in efficiencies across teams (meaning, we get a sense of how accurate the league's stats are by the variance between them, which gets smaller as the season goes on).

So, I took the current variance in efficiency across the league, and I adjusted the Maverick's ORTG to what it would be with a historically average variance between teams, or, with a variance that's more like what it will be at the end of the season.

As a caveat, even though I accounted for regression to the mean, the Mavericks would have to score at a rate proportionate to what they're scoring now to actually hit this mark, and odds are, the number will drop further than what I have it at as players chill a bit, like Devin Harris no longer hitting long twos at a 70 percent rate. The contraction I'm using accounts for some of that, but mostly, it accounts for the Mavs playing more of teams like Memphis and Chicago.

Nonetheless, when accounting for regression this Mavericks team still projects to score 115 points per 100 possessions for the season, an incredible freaking number, that if their pace remains constant (and it should) would translate to about 103 points per game.

When comparing it to the current league average in efficiency (which should also stay roughly constant), we get a good sense of how in-freaking-credible this Mavs offense might be:

And then a similar chart that includes adjusted DRTG as well:

So, yeah, you could say this offense is pretty good.

The Shooting Numbers are Mean

Instead of give you a running narrative, I'm just gonna drop some numbers here. Try not to let your jaw hit the floor too hard. 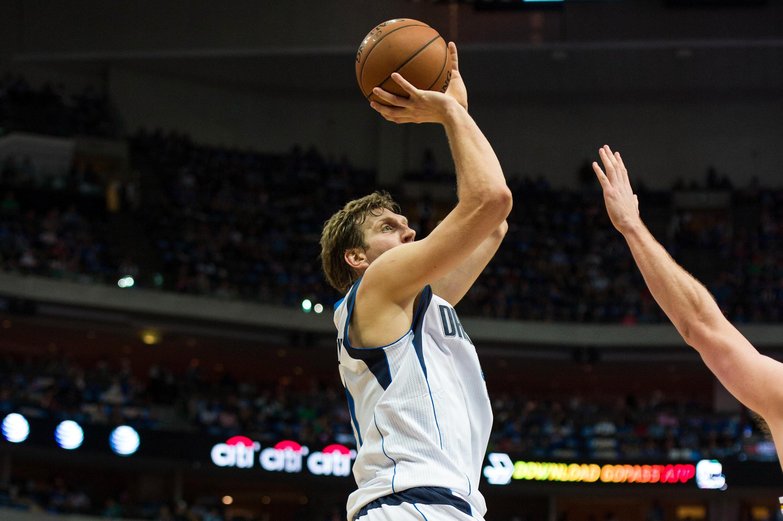 Final Thoughts (Or, a Reminder)

Typically I'm one to go on for a bit longer, but there just isn't too much to talk about so far: for all the ridiculous numbers we have right now, and for all the glimpses at what looks to be a historically elite offense, there really just is a limit to what we can learn from such a small sample size of four games.
But, to that point, it's really important to keep in mind (and I'm sorry for being a wet blanket here): a lot of this is just legitimately not sustainable. The idea that this team could be the greatest offense ever is cool because that's accounting for some regression to the mean, but the odds that 2/3 of the team are shooting at an elite rate, when a massive percentage of the team's shots are jump shots, seems really unlikely.
There should be, I imagine, a bit of a concern as to how elite Dallas will look if their shooting regresses a bit but their defense stays this bad. On the other hand, even if Dallas' offense just goes from "unimaginably destructive" to "historically elite," is that really a meaningful drop-off? Even if the team's shooting percentage goes from 60.5 percent TS percentage to, say, 58.5 percent, does that make their porous defense suddenly matter?
Just keep in mind, these numbers are nowhere near static. Dallas will almost surely cool down a bit. Still, that may not actually matter, in the long run.