Ranking the rankings, week 15: Mavericks are movin' and shakin'

After winning five straight, the Mavs are also big winners in this week's rankings.

Share All sharing options for: Ranking the rankings, week 15: Mavericks are movin' and shakin'

Last week saw the Mavs move down for the second consecutive week in the composite rankings. But...what a difference a week makes. After winning five straight, the Mavs are among this week's darlings. (Remember, these rankings don't include last night's result, which makes some of the comments below a little bittersweet, so pretend last night never happened for a second while you read.)

Let's look at the numbers... 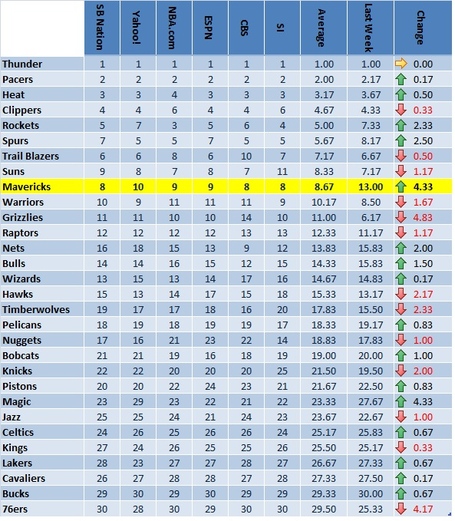 The Mavs just might be the hottest team in the NBA right now, winners of five straight games and four in a row by double digits. The most impressive win during the streak came in Memphis, where the Mavs dropped 110 points on the Grizzlies.

The Mavs have won five straight, but their offense has been off the charts for a month now. Dirk Nowitzki has averaged 24.6 points with an effective field goal percentage of 56.2 percent over that stretch. Vince Carter, meanwhile, is a plus-89 over the five-game streak, which included an important win in Memphis. Dallas is now three games up on the Grizz, already holding the head-to-head tiebreaker.

One of the surest signs this season's West is deeper than it used to be: Dallas is only up to No. 7 after a five-game win streak that has the Mavs at an even 10 games over .500. This group is a far stronger team than last season's 41-41 mess ... but you wouldn't know it looking at the standings.

The Mavs have won a season-best five in a row, but it's worth pointing out that none of the victories came against current playoff teams. Still, Dallas is playing impressive ball, led by the effective duo of Monta Ellis and Dirk Nowitzki.