There are two Tony Mitchell's and everybody is getting hoodwinked

Mitchell won the D-League Dunk Contest -- but which Mitchell was it?

Share All sharing options for: There are two Tony Mitchell's and everybody is getting hoodwinked

I wrote a story on Tony Mitchell a few weeks ago. While talking to him before the game, I learned that there was another Tony Mitchell on the roster of the D-League's Fort Wayne Mad Ants -- where the Pistons had sent the Mitchell I wrote the story on to play some games.

Two Moneyballers are in New Orleans, so click here for a stream of all your All-Star Weekend coverage with a Mavericks theme.

Today in the D-League Slam Dunk Contest, Tony Mitchell won the dunk contest with some sick, sick dunks (one of them is below). But unfortunately, some people had not learned that there were two Tony Mitchell's -- and identified the wrong one.

"The rookie from North Texas had a number of exciting dunks during the contest. You can see the rest of them in the video below." (Bleacher Report) 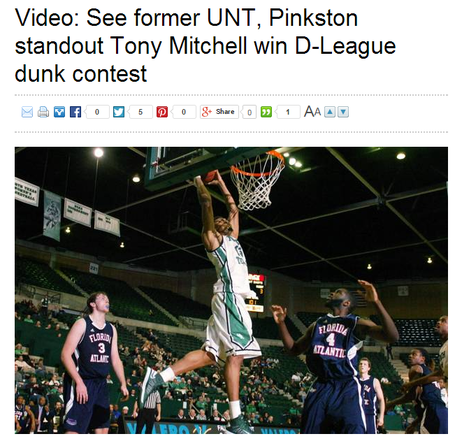 There's a couple of news organization making the mistake, and there were several more than have since realized their error and taken the story down..

The Tony Mitchell who won graduated from Alabama. He's 6 feet 6 inches, wears #18 and can throw down very impressive dunks (this one is from the contest).

The Tony Mitchell who did not win graduated from North Texas. He's 6 feet 9 inches, wears #33 and can ALSO throw down very impressive dunks (and was even mentioned by Terrance Ross as someone he would want to see in the NBA dunk contest).

And if there's still any doubt, here's the great Stephen Howard, a basketball SID at North Texas, clearing it up.

@KennyBybee Unfortunately that's Alabama's Tony Mitchell. Our guy should have been in the NBA Dunk Contest though. Maybe next year.

During the interview for my story, someone asked how the Fort Wayne coaching staff and players identify between the two. "I'm big Tony and he's little Tony," the NBA's Mitchell said.

The moral of the story? We need a Tony Mitchell dunk off AS SOON AS POSSIBLE. Seriously, get those two in a basketball gym and let them destroy rims. Maybe it'll get the memories of that awful NBA dunk contest from Saturday night out of our minds.