You always remember the first time: an NBA All-Star experience

Last weekend, I went to New Orleans and had an adventure. Here's the first-hand account.

Share All sharing options for: You always remember the first time: an NBA All-Star experience

After the All-Star Game finished for the night, after Blake Griffin and LeBron James had an in-game dunk competition miles better than what we had seen in the real dunk contest the night before, after the Eastern Conference surged back to win, after the organist stole our hearts, AFTER all of that -- the All-Stars all spoke one last time.

In a wide-open, dimly-lit room right next to the lockers, the stars of the NBA filed to the tables set up around the edges, and then back out once upon finishing. The first one to enter was Dirk Nowitzki. Four minutes later, he was also the first one to leave.

And can you blame him? He was the grizzled veteran, the last of the old guard. Twelve-time All-Star Dirk had done this before -- in fact, he had done this EXACT weekend before when the All-Star Game was in New Orleans in 2008. Dirk has a wife and son at home, and although he admitted he enjoyed being back in the uniform, this didn't hold any appeal for him anymore.

But he did answer an important question about how this All-Star Game compared to years past. "Well, I think I'll never forget my first," he said. "That was the most special one for me, being named an All-Star, how proud you are after all the work you put in."

He's right, of course. Maybe this is the only All-Star Weekend I'll ever attend, or maybe it's the first of many. But whatever the case, this is one I won't forget.

It all started for me on Thursday, where I made the first leg of the trip from Denton (outside of Dallas) to Round Rock (outside of Austin). I chose to drive, which I now see was much like using a butter knife to cut a too-thick steak -- it did the trick, but it was rough and somewhat painful. But I digress.

Fortunately, Friday's driving was really the only time I hit traffic, or I'd be finding a much more severe analogy to use for the long roadtrip. I lost an hour in Houston and another hour right around Baton Rogue, meaning I landed in New Orleans a bit later than I intended.

But I made it in time to pick up my credential, laughed a little at the huge Smoothie King Arena sign on the side of the arena and slid into my spot for some Rising Stars action. The defense was laughably bad, but Dion Waiters and Tim Hardaway Jr. turning it into a shootout in the second half was highly entertaining -- if ONLY because it was Dion Waiters and Tim Hardaway Jr. Seriously, who could have predicted that?

The first thing on the Saturday agenda was making it to the All-Star media availability following their practice. Dirk was entertaining and excellent, just like always -- talking in German for the first five minutes with a reporter, and playfully pushing a microphone out of his face when it got a little too invasive. 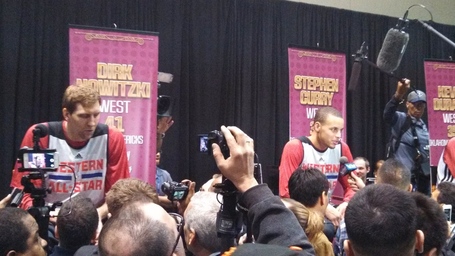 You can actually see the back of my blonde hair in Rebecca's photo above (third head from the left), where I hung out for the duration of the 20 minutes. There were a full players hanging around, but when Dirk wrapped up, so did I.

But let's jump back for a minute -- the Smoothie King Arena and the Superdome, where most of the All-Star activities took place, are right next to each other. But this All-Star practice took place in the opposite direction at the New Orleans Convention Center, which is quite possibly the longest building on the planet.

Fair warning: If you ever go there for any reason, bring emergency flares and a GPS locator so they can at least find your body when you collapse from exhaustion.

To locate the office Rebecca needed to pick up her credentials at, we entered on one end at about 11:15 and walked all the way to the other. Fifteen minutes and what must have been at least a mile later, we reached the office. It took another ten minutes to figure out where the practice was being held, and then ten more to walk BACK the direction which we came to find it.

Following this excursion was my worst meal of the trip, a mediocre muffuletta from the convention center cafeteria. But after the hopeless wandering we went through trying to find Dirk, I needed the sustenance, so it wasn't the end of the world.

My biggest regret of the entire trip occurred shortly thereafter, when I didn't stay for the D-League Dunk Competition. Like I mentioned, it was far away from the actual arena and in my mind, I needed to head back to the hotel to regroup before venturing out again.

I fully recognize it was a mistake because Tony Mitchell put on a better show than any of the actual NBA dunkers. And yes, we're talking about Alabama's T-Mitch, just so there's no confusion.

That mistake aside, Saturday night was full of highlights, whether it was Joe Johnson's painfully slow three-point shooting, Chris Bosh hitting half-court shots or KENDRICK.

I seriously remember thinking that the weekend was over on Saturday night for a moment, so much had happened up to that point. I actually spent most of the morning visiting family, but made it back in time on Sunday to see Kobe make his appearance.

(He had a scheduled 6:30 press conference, but he waltzed in at 6:10 trying to get it out of the way early. Unfortunately, the interview room was currently in use, much to the amusement of us watching.)

Hearing him humbled and uncertain about his future was not what I expected -- I'd highly recommend reading Paul Flannery's breakdown. But ever the professional, it was hard not to respect his words on the podium...even when he went into Spanish.

The All-Star Game was fine, and the weekend closed in that one dimly-lit room, the same one Dirk bolted from after a few questions. There was nothing keeping him there on his 12th time to go through the circus.

But unlike Saturday, I hung around for a little bit. I asked a question to Chris Bosh and Paul Millsap. I listened to a reporter inundate the hometown hero Anthony Davis with queries. I took in the busy scene of reporters on deadline and PR folks herding the player they were assigned to like a mother goose would with her flock. I just absorbed it all, because Dirk was right, you know.

You never forget your first.