After a break last week, power rankings are back. How kind has the sports world been to the Mavs the past two weeks?

Hi everyone. Power rankings are back! I know, you missed me. But I was busy recovering from writing this fun article on my New Orleans experience, which I think we can all agree was more interesting than a bunch of numbers.

But numbers are fun too, though the All-Star break didn't really create much movement for any team anyway. Here are two whole weeks of rankings for you to fight over in the comments! Keep in mind these numbers do not reflect Monday's totally awesome victory against the Knicks. 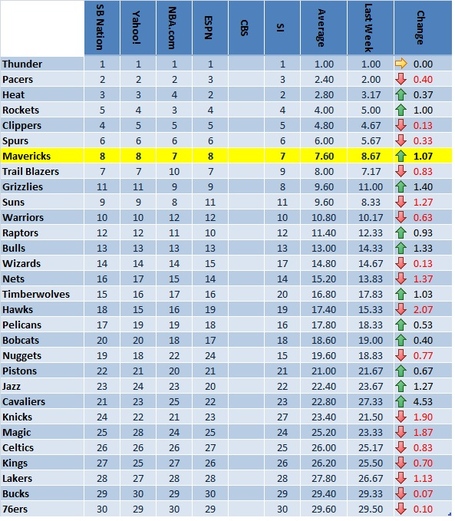 [Ed. note: I wasn't able to get CBS's full rankings from week 16, but Dallas was 6th in them that week.] 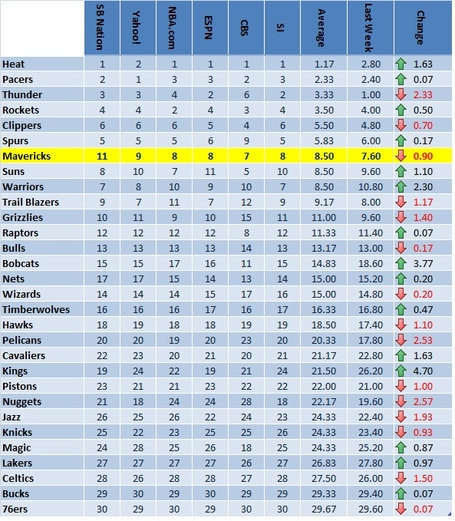 The Mavs went into the break winning six of their last seven, beating the Pacers on the road, and playing some of their best defense of the season. They have only four back-to-backs remaining (no team has fewer) and their opponents on the second night are Detroit (on Saturday), Utah, Boston and the Lakers. That kind of a schedule should allow Dirk Nowitzki to stay fresh through April.

The Mavs snuck up to sixth in the West before the break. Now for the bad news: 18 of their final 28 games come against playoff-bound or playoff-chasing squads. So pretty much every game from here has postseason weight for Dirk and Co. (Kirk Henderson, TrueHoop Network)

The NBA's new longest-tenured All-Star, Dirk Nowitzki, is averaging 24.2 points per 36 minutes, up from 19.9 last season. Dallas will be a tough out in the playoffs if the Nowitzki- and Monta Ellis-led attack continues to play at a top-five level in offensive efficiency.

Just how good is the Western Conference? As one Mavericks scout noted, they are 12 games over .500 and are in seventh place.

A soft schedule has helped the Mavs win eight of their last 10 games. They've shown improvement on the glass (a weakness all season), getting outrebounded only twice in that stretch. But they're still just a game in the loss column ahead of Memphis for the final playoff spot in the West and their schedule picks up later this week, with six straight games against teams with winning records.

The Mavs' 7-2 mark in February is the league's third best. Even better for Dirk Nowitzki's crew: Dallas is down to a league-low three back-to-backs remaining. Any giddiness is tempered, though, by the fact the Mavs still found themselves stuck at No. 8 in the West on Monday morning.

Monta Ellis continues to provide a fascinating contrast to Dirk Nowitzki on offense. Ellis has been the NBA's best at driving toward the rim this season, leading qualified players with 7.3 points per games off drives, according to SportsVU, and ranking second in team points per game off drives (12.2).