Looking at the impact so far of this writer's peculiar second-favorite Maverick.

Most of you probably know at this point that I am a massive, unapologetic Devin Harris fan. I will also admit, now, that there's not much of a good rationale for this. I loved watching him during his first tenure in Dallas, but I was young then, and - especially relative to how much I've grown since - that first tenure seems like it was so long ago.

Part of my completely irrational DH love comes from nostalgia, as most irrational love should, but just as much of it comes from just how perfectly he fit this Dallas team from the moment he was signed. He was signed, and I immediate wrote this, And then later this, all about why I thought he was such a brilliant pickup for this team.

The combination of getting a piece that so neatly fits the puzzle, and having had a long, deep history with that particular piece, creates a feeling sort of akin to realizing that an old dog that ran away has come back and will be staying forever.

So then, with my fandom well acknowledged, I received this tweet a few days ago:

By the way, we are like three days before @HalBrownNBA 's statsketball is just a big "SQUEE" about Harris.

Naturally, I thought, "now, that's ridiculous. Why would I devote an entire weekly column to one player?"

But then I thought, "actually, I'm stupid, and that idea is totally brilliant."

As a side note, once again, I've had to resist the urge to actually just write, "SQUUUUUEEEEEEEEEEE DEVVVIIIIINNNNNNNN" and end the article there.

But anyway, here we are, after 2 weeks of fantastic play that's worth breaking down and thinking about: the Devin Harris edition of Statsketball. All blame for the ensuing article should be directed to Andy Tobo for sending me the above tweet, not to myself.

It's also important to remember, before I write anything else, that Devin has only played 7 games, and so every single stat that I will list from here on out is based on a small sample size, and may/probably will level out.

It's interesting that Dallas actually defends worse with Harris - the team's resident bench backcourt defender - on the floor. It's probably partially a combination of the lineups he's in and small sample size (as is that astronomic offensive number), but frankly, the defense just doesn't really matter here. For God's sake, the Mavs score 120 points per 100 possessions while the Harris plays.
I mean, Dallas scores 7.9 points per 100 more than their opponents when he plays. He helps the team that he plays for score more points than other teams. The end.
Except it's not really the end. There is something really, really interesting here: he's been an elite asset this year as a shooting guard, but not quite so much as a point guard.
At first, this seems like a small sample size thing: he's barely played above 100 minutes total, so how many minutes could he have played at point or two guard? There can't possibly be enough data to differentiate his performance by position reliably...right?
The thing is, there's more data to back this one up. For example, we see the same thing when we look at the guards that Harris is paired with: when Harris plays with Shane Larkin or Jose Calderon, and is ostensibly the shooting guard, the Mavericks score 9.7 and 6.9 points more than opponents in 100 possessions, respectively. When Harris is paired with Monta, the Mavericks have been outscored by 2 points per 100 possessions.
This makes sense though. Harris fills the most gaps - fixes the most problems - as a shooting guard. The Mavs don't really need another guy to run the offense and keep the team in flow: Jose, Shane, and Monta all do that perfectly capably. No, what the Mavs need is a passable perimeter defender and smart, competent 3rd or 4th offensive threat.
As it's turned out, Harris is - maybe - a good defender, but he is definitely the absolute epitome of a smart, clever 3rd or 4th threat. He passes and moves the ball well (essential to being a third option), he's a solid spot up option to space the floor, and he's downright dangerous out of a pick and roll.
Really, Harris doesn't give the team what the team needs at the point, but he gives them the perfect thing at the two guard.
Which makes you wonder: what gives with the DNP-CD's that Shane has gotten in the last few games?
I'm going to go on a rant here for a moment, because I'm afraid that I've created a monster: Harris is not, and has never really been, a great defensive stopper. He has been a defensive asset, at times, which could be potentially huge for this Mavs squad that couldn't defend against a team of 5 Shawn Bradleys if it came down to it.
But this idea keeps floating around that Harris' return fixes the defense, and it doesn't even come close to doing that. I'm afraid that I've propagated this myth, and I'm sorry, but it really needs to end. He's fine, but he's not much better than that.
That said, it's hard to get a good grasp on where, exactly, his defense has been this year - but that's pretty much always been the case with Harris. He hasn't had enough play time to break down the defense play by play quite yet, but a lot of his typical defensive signs are there: phenomenal isolation man-on-man defense, but only ok at rotating and negotiating screens. Opponents have shot a lot of threes against him so far, too, which he's always been bad about conceding. Opponents have also hit a low percentage on those shots, so far, but that percentage will likely go up at least a little bit with time.
It really is a little too early to peg his defense at the moment, but this is absolutely something to watch. The Mavs are going to start regressing on offense when Harris plays - they won't keep crushing teams at the 120 points per 100 rate all season if he keeps playing 20 minutes per game, because that'd be insane - and so whether or not the defense figures itself out while he plays is going to be key.
In the next few games, it would seem that we're going to be seeing a lot more of Harris at the point, which is going to both hurt the offense (a lineup with Harris and Ellis is fast, but has no spacing at all) and make his defense increasingly crucial for this team. If the team's defense doesn't get better, they may find themselves in some more dire straights.
Last year, Atlanta's defense was (nearly) at its best when Harris played. If he can do the same for Dallas, that'd be monumental, but at the moment, it's not really close to that point.
We already know that Devin is fast. The numbers agree. He's quite fast. Time to move on. 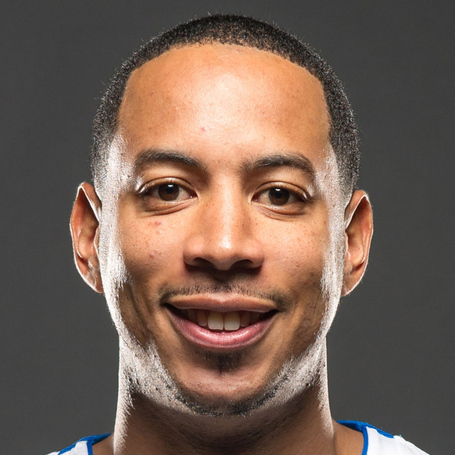 Admittedly, this picture is a little creepy as an example, but frankly, if you don't find this whole section a little creepy then I don't know what to tell you.
The smile just doesn't seem too forced, you know? I'm sure it's completely, 100% forced, but there's something about the light twist upward of the smile that says, "I'm genuinely excited to be playing back in Dallas and I'm really thrilled to be taking this picture. Honestly." It's nice. 9/10.
You may not have noticed, but we here at Mavs Moneyball have certainly taken note of DH's killer jacket collection. Here's just a sample of some of the blazers that we happened to have in our photo editor: 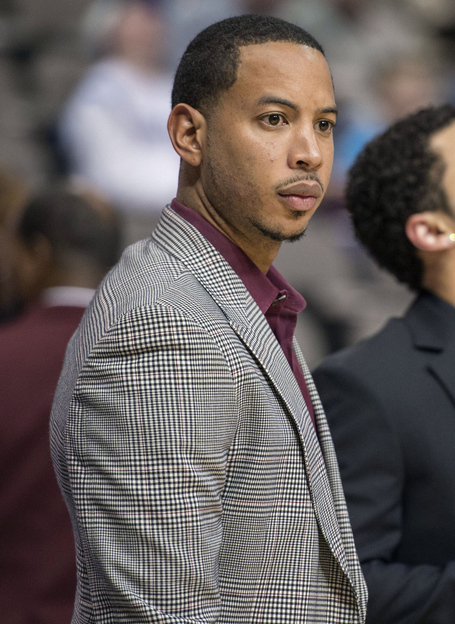 That is as classy a use of plaid as I think I've ever seen. Muted colors, mostly grays and blacks, but with a hint of red to match his shirt. Shoulders are slim cut. Great taste, good work. 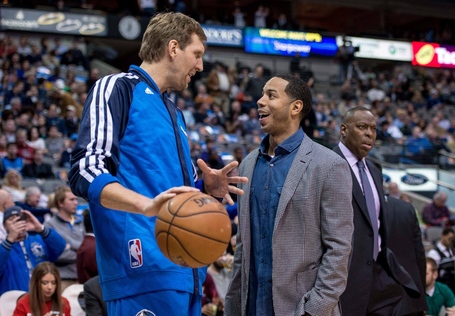 This one looks pretty similar to the last one, but it's actually a classic herringbone pattern instead of plaid, though it's hard to tell form a distance. Gutsy jacket, herringbone hasn't been in for a while, but the pattern is nice and he goes with a denim shirt to pull out the casual-ness of the style. I like it, but I can imagine this being controversial. 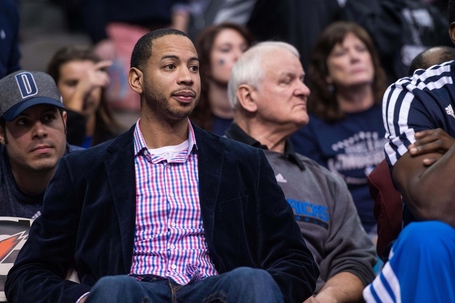 Guys, it's a blue velvet jacket, and he nailed it. I don't know what else to say.

Statsketball is a registered trademark.