Falling victim to the surging Grizzlies and their own loss to Houston, the Mavs take another little stumble this week.

Share All sharing options for: Ranking the Rankings, Week 14: Mavs move down for second consecutive week

In advance of tonight's showdown against the Grizzlies, the composite rankings this week have the Mavs' opponent vaulting into the top 5, while the Mavs....well, did not. We've been saying all week that this game will be the closest thing to a playoff game the Mavs have had all season, and while you hesitate to attach such big importance to a February game, the Mavericks certainly are. And the rankings below may give you a hint as to why.

A reminder that these rankings do not reflect games played Monday or Tuesday this week. 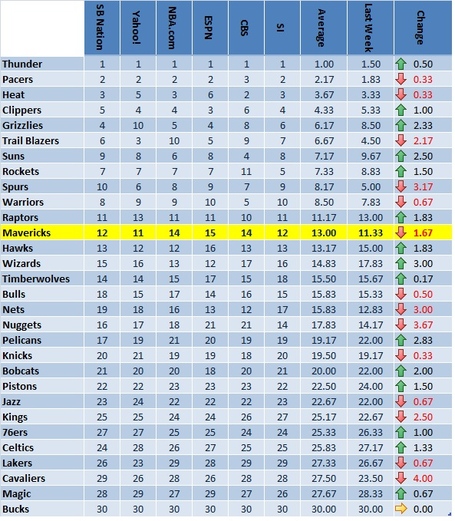 Speaking of deserving All-Stars, Dirk Nowitzki is one, and he has proved it with some dynamite player over the last three games. Nowitzki has put up 28, 38 and 34 points in the last three while shooting over 60 percent in the process.

The Mavs have been a top-10 3-point shooting team, but shot 7-for-38 from threein their two games last week, with Jose Calderon missing two threes to win in the closing seconds of Wednesday's loss to Houston. Through his first eight seasons, 29 percent of Calderon's shots had been 3-pointers. He's doubled that ratio this season. Only 17 percent of his 3-point attempts have been off the dribble.

I don't like where this team is going but their offense is going to keep them within playoff range.

The most underrated contributor to the Mavs' success this season: DeJuan Blair. Doing Dirk Nowitzki's dirty work on the glass, Blair is averaging 14.7 points and 11.2 rebounds per 36 minutes while shooting 55.8 percent from the field.