The Mavericks become the second team this season to sweep the Pacers, joining the Phoenix Suns in going 2-0 against a team that has, at various points, had the best record in the NBA.

On recovering from the Denver game

We've responded well from our debacle on Wednesday night. That was very disappointing. We put up very little resistance against Denver and if we play like that collectively, we'll get our butts kicked by Bella Thorne in an arm wrestling contest. Anyone know how Bella Thorne is? It's Abby's favorite Disney actress. She's on Shake It Up.

On not hitting his shots

Yeah, I had a couple of wide open looks there in the second quarter, just a couple of wide open 15-, 16-footers, and they just didn't go down today. Kind of showed, I had a layup that kind of rolled around every part of the rim and then rolled back out. But there's nights like this, but the team picked me up. I guess I did a good job of being active, getting some rebounds.

Maybe we needed that Denver loss to go to the bottom and fight back up. Got a little fortunate in the Portland game.

It was after another one of my misses, so I set him up perfectly for that one. -Dirk

That was a huge play. If I'm not mistaken, it was after another one of my misses, so I set him up perfectly for that one. I mean, if we play hard and fight for each other, it starts obviously with the veteran guys who need to set the tone.

He's probably the greatest American to ever play hockey. I think he was hockey here in Dallas, and when they moved the team here, he's a big reason they established themselves and made it. I remember the '99 run they had my rookie year, that was amazing, even though I was already gone in Germany when they won it, I tried to follow it. He's a big reason why they're still around in Dallas.

I knew they invited us a couple of months ago, I knew if there was a day off I'd love to go see it, and I thought it was a special moment. I think the hockey guys do it the right way. In basketball, we do it at halftime, it takes us like 10 minutes, but these guys took their time and everybody was there from the championship team. His speech was incredible. I actually had a couple of tears in my eyes, it was a great ceremony. 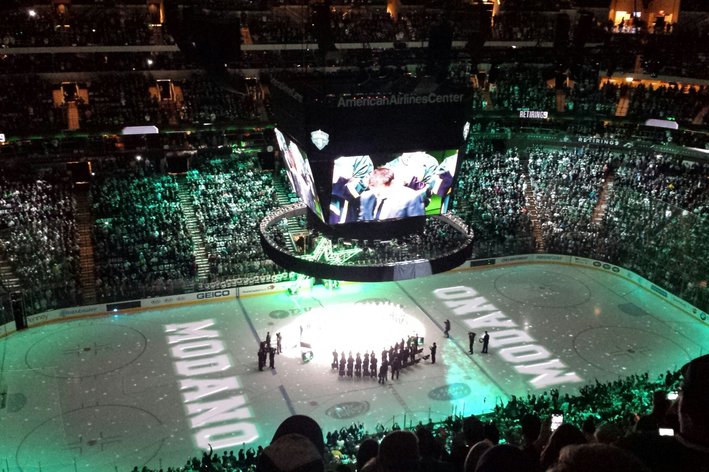 On the different between Denver and these two games

I think we had lost ourselves for a minute and it's two big games that can put us back on pace for our goal, winning fifty games and making the playoffs. Losing three and then having to come back and play two great teams, we needed to bounce back.

On what he did best tonight

Rebounding. Yeah, but, you know. We had to get in there and help the big guys, because they had a tough match-up. They had to box out two big guys to go to the board and we had to go in there and get the loose balls, and we did.

On helping pick up the load for Dirk with 20 points

It was one of those games where we knew the big men were going [focus] on Dirk. He had a lot of great open shots that he usually hits that he wasn't hitting, so I think everybody contributed to stepping their game up another notch and sharing the ball great.

On how he and Devin play together

On that rebound, jumping six times

Just trying to win the game. ... Coming out, we wanted to give a better showing, and rebounding was the key for us tonight. Figure we can get the shots that we wanted. I just love the game and I'm trying to do whatever I can for the team to do what it takes.

On taking his man off the dribble

The situation, more than anything. I really don't worry about who's in front of me, but what situation. Just got to get there. When someone believes in your ability, you've just got to get there and do it. I just go out there and play, you know, just be aggressive when I'm in there. With the penetrating of Devin and Monta, when I catch it and go, it's easy.

On the big leads the team can never hold onto

I look at it like this: if we don't have those big leads while these teams are coming back, we're getting blown out. We're giving ourselves a cushion to mess up, and still maintain the lead if we mess up. We don't want to do it, but at the same time, we did the job early to establish a lead, so we want to come out and establish a lead. ... You know they're going to make their runs.