After a couple of solid wins this past week, the Mavs have crept back into most of the rankers' good graces.

Share All sharing options for: Ranking the rankings, week 19: Mavericks regain some ground 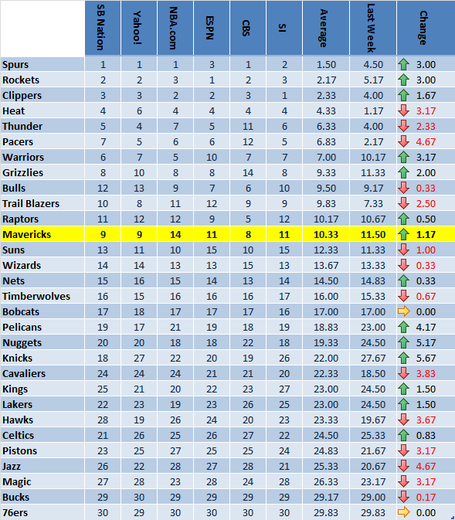 After a three-game losing streak, including a loss to the Nuggets, it was the Mavs who looked like they were in trouble of falling out of the playoff picture. Dallas has momentarily halted their slide, beating Portland and Indiana in consecutive games.

After losing three straight, the Mavs recovered to beat the Blazers and Pacers over the weekend and stay ahead of Memphis and Phoenix. With only three back-to-backs remaining (one this week), they have a schedule advantage over both. The Devin Harris signing is finally paying off. Playing mostly alongside Monta Ellis, he had 32 points on 10-for-15 shooting and was a plus-40 in the two wins.

They keep hinting at a collapse, yet continue racking up wins. They keep just sliding into a seat during playoff spot musical chairs.

Coach Rick Carlisle tends to get the most out of his players. On Sunday, he got a season-high 20 points from a resurgent Devin Harris in a big win over Indiana, highlighting the Mavs' 41-4 scoring advantage off the bench.